Within and near the Marcellus and Utica shale plays, power plant developers are building more than a dozen new natural gas-fired generating units, mostly combined-cycle plants that can operate essentially around-the-clock. This construction boom, spurred by a combination of abundant, low-cost gas and the regulation-driven retirement of scores of older coal plants, is boosting gas consumption close to gas production areas and reducing—at least a bit—the surplus gas volumes that Marcellus and Utica producers and marketers need to move to markets outside the region. Today, we examine the race to build new power plants near production areas in the Northeast, and consider what the resulting local gas consumption might mean for the region’s gas prices and pipeline needs.

Midstream companies the past few years have been scrambling to add gas takeaway capacity out of the Marcellus and Utica shale plays, where gas production levels—now averaging about 20 Bcf/d--have been overwhelming the existing pipeline infrastructure and depressing Northeast gas prices. We’ve tracked this pipeline build-out in several blogs, including our 50 Ways To Leave The Marcellus series (also the subject of an RBN Drill Down report); we’ve also considered the effects of the Northeast’s still-constrained pipeline network in our recent Living In Forward Curves series.

This new pipeline capacity is still needed (and badly), particularly if Marcellus and Utica producers continue to increase their gas output. But producers and marketers of Northeast gas also stand to benefit from much-increased gas consumption from power generators (as well as industrial customers) closer to home—that is, within five, 50 or 150 miles of their gas wells. Perhaps the simplest way to assess this power plant construction boom is to consider the projects being developed in the electric sector’s PJM, or more specifically within the heart of PJM: Pennsylvania, West Virginia and Ohio, where all of the Marcellus and Utica gas production is occurring (New York having opted to forbid high-volume hydraulic fracking). PJM, as you may recall, is the regional transmission organization (RTO) that oversees the electric grid and market in a multistate region stretching from northeastern North Carolina to Chicago (gray-shaded area in Figure 1). 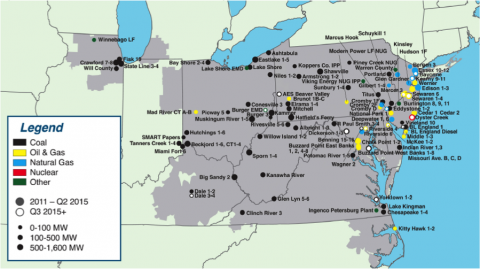 Before we summarize all the new gas-fired capacity being built within or near the Marcellus and Utica plays, though, let’s look at a key driver behind this power plant development—the retirement of scores of older coal-fired units tied to ever-tightening environmental rules (and the high costs that would have been involved in bringing those units into compliance). The solid black dots in Figure 1 show the coal units already taken offline; the black-bordered white dots show coal units to be retired soon. By PJM’s count, some 20,900 MW of the region’s coal-fired capacity will be retired in the 2011-19 period, the vast majority of that total in the three-state sub-region (Pennsylvania, West Virginia and Ohio) we’re focusing on.