Looking out over the next year and a half to 2016, Houston crude storage capacity looks to be lower than necessary to meet operational needs. With continuing increases in pipeline crude streams headed into the area in the next six months, we could see supply disruptions with consequences for price volatility. Probable victims of these disruptions would be producers looking to find a home at Houston refineries for their production. The solution is to build more storage but the market is not yet sending alarm signals to that effect.  Today we conclude our series on Houston storage capacity.

In Part 1 of this series covering the changing crude storage situation at the Gulf Coast – home to 50 % of US refining capacity - we discussed how storage provides a buffer or slack in the distribution chain from wellhead to refinery. In Part 2 we showed that the typical imported waterborne barrel delivered to Houston refineries spent 17-20 days in floating storage. In Part 3 we calculated Houston area refinery storage days at 21-23 days depending on refinery throughput versus a Gulf Coast average of 32 days. In Part 4 we reviewed new crude pipeline flows into the Houston area. Current pipeline capacity is about 1.4 MMb/d with another 1.5 MMb/d expected online by the end of 2015. In Part 5 we looked at the challenges refiners could run into unless more storage flexibility is added to the system than current plans allow. In Part 6 we looked at a potential underground cavern storage project that would add over 17 MMb/d to Houston area capacity. We conclude this series with thoughts about future storage requirements in the Houston area for refiners, producers and trading companies.

About 50 MMBbl was added to Gulf Coast region (Petroleum Administration Defense District (PADD III) crude inventories during the first four months of 2014 (see the red line in Figure #1). That created a record surplus over the five-year average (blue line on the chart). Even though refiners have processed crude at record rates since April and reduced the stockpile, crude inventory levels are still well above the five-year range (grey shaded area on the chart). We expect overall inventory to build again in the fall during refinery turnarounds. In Houston, the onslaught of new crude flows via pipeline will continue with the 300 Mb/d Magellan/Oxy Bridgetex pipeline expected online early in October (2014) and the 450 Mb/d Enbridge/Enterprise Seaway Twin by the end of the year as well as the expansion of the Enterprise Eagle Ford pipeline from 350 Mb/d to 425 Mb/d. In the past two weeks, two new projects have added to likely inflows into Houston in early 2016 – both bringing in light shale crude from the Eaglebine in East Texas (see We Heard it On the Eaglebine for more on that play). These are the Blueknight 100 Mb/d KnightWarrior and the Texstar Logistics 200 Mb/d East Texas pipeline project – both of which will bring crude into terminals in the Ship Channel. By 2016 there will be 3.2 MMb/d of crude pipeline capacity into Houston. All of this incoming crude adds to the Houston storage challenge. 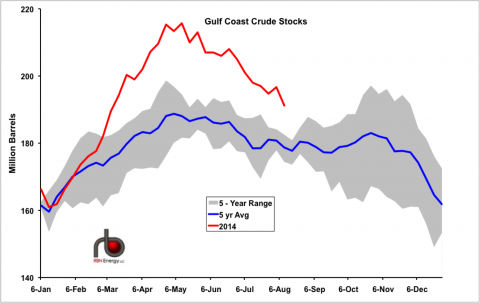 Of course, some of the incoming crude will push out imports – mostly light and medium sour crude. However, as we learned at the “Surviving The Flood” conference in Houston last week that RBN co hosted with Turner Mason & Company, Gulf Coast refineries configured to process heavy crude are likely to continue doing so regardless of the balance of light crude supplies from domestic production. That is because the US Gulf is the where most heavy crude processing capacity is located and there are limited alternatives for heavy crude producers, so they should price their barrels to fill Gulf Coast capacity. At the moment, much of the heavy crude feeding Houston refineries is imported from Mexico and Venezuela. The chart in Figure #2 shows the make up of waterborne imports into Houston, Galveston and Texas City ports since January 2011 using data from the Energy Information Administration (EIA). Light crude is defined as greater than 31 degrees API – and that includes sour as well as sweet crude – so the light crude still being imported into Houston is sour barrels – mostly from the Middle East (red shaded area on the chart). That light sour crude should be backed out of Houston by early 2015. Over the period since 2011 imports of both light and heavy crude have declined by about 0.5 MMb/d but we expect a residual demand for about 0.8 MMb/d of heavy crude (blue shaded area) as indicated by the black dashed line. However that residual heavy crude demand will not necessarily be met by waterborne imports. The new Flanagan South pipeline from Pontiac, Il and the Seaway Twin pipeline from Cushing, expected online by the end of the year, will deliver as much as 600 Mb/d of heavy Canadian crude to Houston – likely pushing out heavy imports from Mexico and Venezuela. When that happens – perhaps as early as 2016, residual waterborne imports to Houston would be 200 Mb/d – all of it heavy crude. As we have demonstrated in the analysis in this series, removing waterborne imports from the equation reduces storage flexibility because floating cargoes of crude are easier to divert than pipeline crude during supply or demand disruptions such as refinery turnarounds.

To access the remainder of Saving All My Crude For You – Bumpy Ride Ahead for Houston Crude Deliveries you must be logged as a RBN Backstage Pass™ subscriber.