No, we aren’t talking about Colorado’s recent legalization of the “wacky weed”, but rather the high that the rush of light crudes is bringing to the refining industry in PADD IV, the Rockies region.  While John Denver’s famous lyrics spoke of the magic of the Rocky Mountains, regional refiners have found elation in recent years as both domestic and readily accessible Western Canadian production increased, stranding crude supplies, putting downward pressure on prices and lifting their margins sky high.  Today we examine how this has impacted the economics of the region and incentivized investment.

Rocky Mountain refiners are unique, serving customers in some of the largest and most sparsely populated states in the country.  The region has only 17 refineries (counting the two Suncor refineries in Denver, CO as one), with a total capacity of 742 Mb/d; about the same as the single Motiva refinery in Port Arthur, TX.  Nevertheless, the statisticians at the Energy Information Administration (EIA) grant the Rockies their very own Petroleum Administration for Defense District – PADD IV – one of the five such major subdivisions of the U.S.

The average refinery size in PADD IV is only 42 Mb/d, and the Suncor Denver complex is the largest at barely over 100 Mb/d.  They are also less complex than refineries in much of the rest of the U.S.  While many are full conversion refineries, they lack the same percentage of total upgrading capacity that most refineries in other PADDs possess.  In most other regions, small and less complex refineries have been shut out by economies of scale, but in PADD IV they are alive and well.

Figure #1 below shows the geographic distribution of Rockies refineries.  There are four in Montana with total capacity of 196 Mb/d, six in the Salt Lake City area, seven in Colorado/Wyoming, and one more up in North Dakota.  Note that North Dakota is technically not in PADD IV.  Instead it is located in PADD II, a source of real frustration for those of us in the business of using energy statistics.  But regardless, we include North Dakota in our definition of the Rockies, bringing the total number of refineries in the region up to 17 for a total capacity of 742 Mb/d. 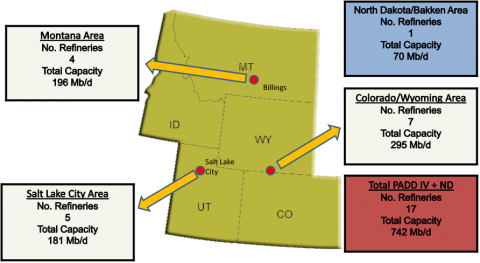 The Rockies region is (and always has been) totally disconnected from waterborne crude markets, instead being dependent on domestic U.S. light sweet crude oil production and adjacent Western Canadian - mostly heavy sour - crude for refinery supply.  Production from both of these sources is growing rapidly.  Within the next couple of years in-PADD production is forecast to exceed regional refining demand, the only region where that situation is expected to exist.  Combined with barrels coming into PADD IV from Canada, there is already a net outflow of crude barrels from the region, averaging about 180 Mb/d in 2013.  This surplus of crude has led to very attractive prices for refiners.  Since Canadian crude pipelines run through the region adding to Bakken, Niobrara and other Rockies production, area refiners also have had access to these heavy crude barrels at attractive discounts compared to refiners on the coasts or farther south.