At the end of last year (2013) Kinder Morgan invested nearly $1 Billion to buy five existing Jones Act tankers and four new builds on the way. Two other companies, Crowley Maritime and Seabulk tankers (part of Seacor Holdings) placed orders in 2013 to build six more tankers in the next two years. In all there are twelve new build orders on the books and options for even more threaten to rock the boat for current record high charter rates (over $100,000/day) being enjoyed by the 42 vessel Jones Act fleet. Today we detail the tankers owned by Kinder Morgan, Crowley and Seabulk.

In the first episode in this series we described provisions of the Jones Act that restrict marine transport between US inland and coastal ports to US Flag vessels (see The Jones Act Coastal Trade). Just 42 self-propelled tanker vessels – the majority of which carry about 300 MBbl of refined products or crude oil ply US coastal waters. In this episode we begin a deep dive look at the Jones Act tanker fleet and its owners.

But before we get to the tanker owners, the map below provides a useful bird’s eye view of the routes that Jones Act coastal tankers follow. The blue dotted lines show the actual and potential routes followed by Jones Act tankers. As we learned in the first episode, these routes cover the Alaska trade – down the West Coast from Valdez, AK to refineries in Puget Sound, San Francisco Bay and Los Angeles. From the Gulf Coast Jones Act Tankers deliver crude from Corpus Christi, TX to Houston area refineries and to the Louisiana Offshore Oil Port (LOOP). 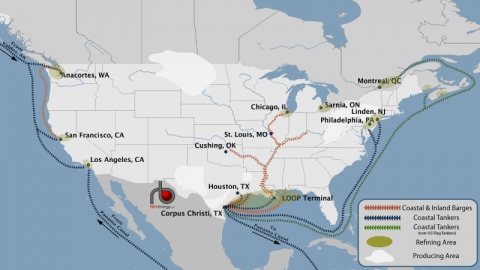 Tankers also travel further up the East Coast to refineries in the Philadelphia, PA region as well as the Bayway refinery in Linden, NJ. The map also shows the Westbound Panama Canal route from Corpus – a route that has been used recently to ship Eagle Ford crude to the West Coast. In addition the map shows coastal and inland barge routes (red dotted lines) that we cover later in the series and the routes that Non-US Flag vessels can take from Corpus to the East Coast of Canada (green dotted lines).

Crowley is one of the largest independent operators of petroleum barges and tankers in the United States. In August 2012 the company purchased two new “Veteran” class tankers - Pennsylvania (pictured below) and Florida, delivered in September 2012 and March 2013 from Aker Philadelphia Shipyard Inc (APSI), that each have 330 MBbl capacity to carry crude oil, refined products or chemicals. Crowley also operates five more 331 MBbl  “State” class MR tankers – the Empire State, Golden State, Pelican State, Sunshine State and Evergreen State on behalf of American Petroleum Tankers (APT – more about them below). In addition to petroleum tankers, Crowley has a fleet of 17 smaller Articulated Tank Barges (ATB’s - more about them later in the series). 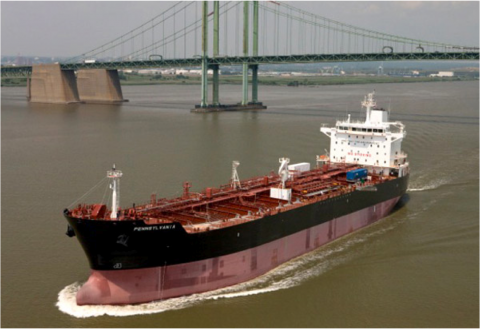 In August of 2013, Crowley announced a construction contract with the APSI Philadelphia shipyard to build four additional 330 MBbl tankers for delivery between 2015 and 2016 with an option to build four more by 2017 – making a total fleet of 10 MR Jones Act tankers. Under a joint agreement between Crowley and APSI the latter will invest in the partnership for the first four vessels. Crowley will own and operate the vessels and APSI get a share of chartering revenues.