Canada imports as much as 2 Bcf/d of natural gas from the US in the region around the Dawn trading hub. The Dawn system has traditionally been fed by Western Canadian supplies and long haul pipelines from the US Gulf, Midwest and the Rockies. Marcellus gas can already reach Dawn via the border crossing at Niagara to the East. The Nexus Gas Transmission project will bring 1 Bcf/d directly into Dawn from the Utica. Today we detail the changing flows.

In Part I of this series (see Return to Sender – No Such Demand) we observed declining flows into the Northeast US from Canada and saw that new supplies of Marcellus gas have started to flow back across the border into Canada at Niagara. We noted that demand for natural gas in Ontario is expanding while traditional supply volumes into the region from Western Canada are declining. In Part 2 we covered the infrastructure additions and expansions that are being made to facilitate the flow of gas from Marcellus into Ontario both West to the Union gas trading hub at Dawn and East to the TCPL mainline and the Enbridge Greater Toronto Area (GTA) distribution system (see Return to Sender - Flowing Marcellus Gas into Eastern Canada). This episode looks at gas supplies currently flowing into Western Ontario at the Dawn Hub and a project to build a new pipeline to deliver 1 Bcf/d of Utica gas into Dawn.

Located 22 miles southeast of Sarnia in Ontario the Union Gas Dawn Hub is an important natural gas trading and storage hub with day ahead trading volumes of  0.75 Bcf/d (source: ICE data). The Dawn Hub’s strategic location provides upstream access to most of North America’s major supply basins. Dawn is connected to multiple incoming routes from Western Canadian, Mid-continent, Rockies, and the Gulf of Mexico and has downstream interconnects to eastern Canadian and Northeast US markets. Dawn is an important storage facility with over 155 Bcf of high deliverability storage in 23 depleted reservoirs, the largest underground natural gas storage facility in Canada. The Dawn storage facility can inject or withdraw just under 2.8 Bcf/d when operating at peak capacity. Upstream pipelines connected to Dawn also have access to over 610 Bcf of storage facilities in Michigan. Local Distribution Companies (LDCs), marketers and natural gas-fired power generators all hold storage and actively trade at the Dawn Hub.

The chart below shows imports into Canada and exports to the US since 2008 at the main border points surrounding the Dawn Hub (source: National Energy Board – NEB). Note that the main flow of gas is coming into Dawn from the US although some of that gas originates in Western Canada before it gets to Dawn. Current import levels are about 1.75 Bcf/d and exports are negligible – probably representing storage withdrawals back across the US border into Michigan (there’s a map coming up soon to help with the geography). 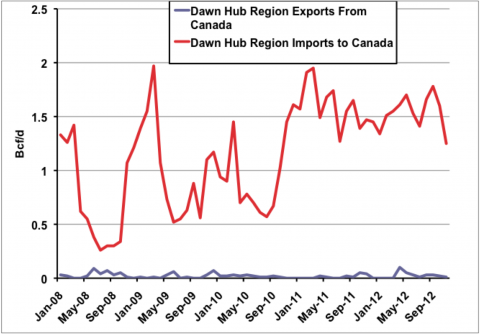 The map below has the main interstate pipeline interconnects coming into Dawn marked. Historically the first interstate US pipeline that connected to Dawn was the Panhandle Eastern Pipeline (see purple arrow on the map - PEPL) interconnect at Windsor, ON (Ojibway). Energy Transfer Partners acquired PEPL in 2011 and its gas supplies are from the Southwest US (Texas Panhandle and Oklahoma, the Midwest, the Rockies and the US Gulf Coast via the Trunkline system. Import volumes into Canada at Windsor since January 2009 have averaged 125 MMcf/d.

In the mid 1960’s the Great Lakes Gas Transmission (blue arrow on the map - GLGT) pipeline was built by TCPL to provide an alternative source of supply to the Midwest and Dawn from Western Canada.  The GLGT system is also linked to US Southwest and Gulf Coast supplies from the ANR pipeline (owned by TCPL). Winter demand into Dawn from GLGT is about 1 Bcf/d. Also connecting into Dawn via the St. Clair border point is the Vector Pipeline (green arrow on the map). The Vector pipeline system extends from the Juliet, IL compressor (south of Chicago) through Indiana, Michigan and then across the border to Dawn. Vector receives supplies from the Alliance system that bringing wet gas from Western Canada via the Bakken to Aux Sable in Chicago (see When Liquids Are Not Liquids). Vector also receives gas from Northern Border (another TCPL pipeline)  that carries Canadian, Bakken and Rockies Gas to Chicago. Vector is a joint venture between Enbridge (60 percent ) and DTE Energy (40 percent). DTE Energy owns the Michigan Consolidated (MichCon) gas distribution system. The Bluewater interconnect shown north of Dawn on the map provides access to storage and supplies from the GLGC, MichCon, Vector and ANR systems. The current capacity of the pipelines feeding into the Dawn Hub is 4.5 Bcf/d. 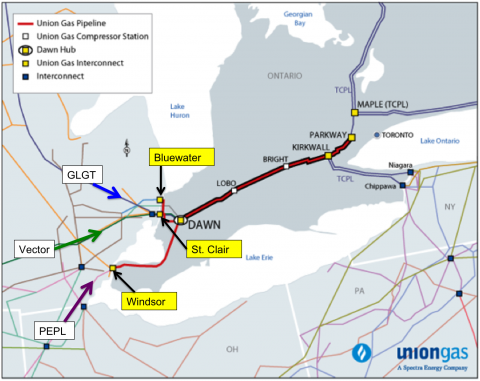 We mentioned earlier that the NEB import data contains a mixture of gas imported in the Dawn region – some of which originates in Canada. The total imports into Dawn are between 1.75 and 2.0 Bcf/d. Looking more deeply into the NEB break down we can estimate that the gas coming into Canada at Windsor and St Clair – about 1.1 Bcf/d is primarily supplied from US pipelines.  That gas mostly originates from the Gulf Coast, the Midwest and the Rockies although some gas that originates in Canada can flow from Northern Border and Alliance into the Vector pipeline. The rest of the supplies coming into Dawn must therefore originate from TCPL pipelines. Subtracting the 1.1 Bcf/d at Windsor and St Clair from the total at Dawn (1.75 to 2.0 Bcf/d) leaves between 0.7 and 1.0 Bcf/d coming into Dawn from TCPL pipelines originating in Western Canada.

As you can tell the flows into Dawn are quite complicated to untangle but there are two main trends to note. First as we learned in Part I of this series supplies from Western Canada on the TCPL system are declining and second that demand for natural gas in Ontario is set to expand 1.25 Bcf/d from 2.0 Bcf/d in 2011 to 3.25 Bcf/d by 2020 – mostly due to increased natural gas generation. That means that demand at Dawn is growing and new supplies to meet that demand would traditionally expect to come via US long haul pipelines supplied from the Gulf Coast, Midcontinent and Rockies. That was the old system and it is ending.

Here is why. The enhancements that we described in Part II of this series now permit Marcellus and Utica gas to displace Western Canadian supplies at Niagara. A 2012 proposal to build a new pipeline into Dawn from the Utica shale is now poised to further displace supplies into Dawn from traditional US long haul suppliers as well.

The proposed Nexus Gas Transmission pipeline is a joint venture (one third each) between Enbridge, DTE and Spectra (the owners of Union Gas). The map below shows the planned route (large blue arrow) from the Western Pennsylvania and Eastern Ohio Utica shale basin around the tip of Lake Erie and into Dawn on the Vector pipeline. The pipeline would be approximately 250 miles long and have a capacity of at least 1 Bcf/d. The project completed a successful open season in November 2012 and now waits for permitting and FERC approval expected in 2015. The current projected in-Service date is late 2016. 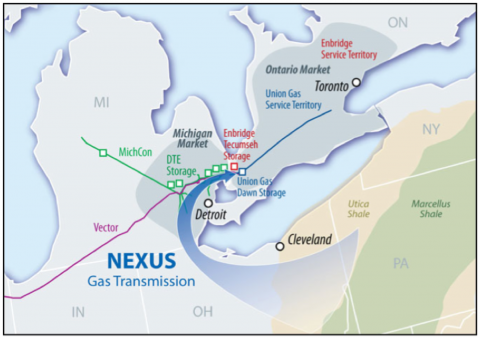 The new pipeline would establish a direct route to the Ontario and Eastern Canadian markets for western Appalachian producers that will put them into competition with Marcellus supplies from Eastern Pennsylvania and New York that now cross the border into Ontario at Niagara. The project will displace existing flows into Dawn from TCPL owned pipelines (GLGT, ANR and Northern Border) and the Energy Transfer PEPL pipeline. The project increases the gas flowing into Dawn on the Enbridge and DTE owned Vector pipeline.

The Nexus Gas Transmission project is one more step in the fast moving process where expanding Marcellus and Utica gas supplies replace traditional volumes from Western Canada to Eastern Canada and the Northeast US. Nexus turns the screws one notch tighter by also replacing traditional supplies into Dawn and the Michigan peninsula from US long haul pipelines such as ANR and PEPL. This is the “Great Flow Reversal” in action and it is only the beginning.

Thanks for a great blog ever!For me,natural gas is a safe and affordable fuel for heating and cooling our homes and cooking our food. It also has broad uses for businesses, manufacturing and power generation – where it represents the fastest and most cost-effective path to reducing our greenhouse gas emissions. What's more, the rising production is increasing U.S. competitiveness, promoting job growth and bolstering the economy with lower, more stable natural gas prices.