Canadian natural gas exports to the Northeast US fell from about 3Bcf/d in 2008 to around 1 Bcf/d in 2011 and have been at that level ever since. Last November significant US exports began to flow northward across the border into Canada at Niagara. Natural gas demand in Ontario is forecast to reach 3.25 Bcf/d by 2020. Today we describe how projects on the Canadian side will allow Marcellus gas to replace traditional Western Canadian supplies.

In Part I of this series (see Return to Sender – No Such Demand) we observed declining flows into the Northeast US from Canada and saw that new supplies of Marcellus gas have started to flow back across the border into Canada at Niagara. We noted that demand for natural gas in Ontario is expanding while traditional supply volumes into the region from Western Canada are declining.

The map below shows the traditional gas flows from West to East Canada and down to the US border at Niagara today via the TransCanada Pipeline (TCPL). That system has two routes into Eastern Canada from Alberta. The first is from the north via the TCPL Mainline (blue line) and the second is from the west through Michigan on the Great Lakes Gas Transmission (GLGT) system (grey line) that connects to the Union Gas distribution company (owned by Spectra) at the big trading and storage hub at Dawn. The Vector pipeline (green line) that is connected to US gas supplies from the Rockies and the Gulf Coast also feeds the Dawn Hub. [Two further interconnects not shown on the map carry US gas from the Gulf Coast and the Rockies into the Dawn hub at St. Clair and Windsor – more about these in the next episode in this series]. The Union Gas Dawn/Parkway transmission system (red line on the map) flows gas east to the Canadian border at Niagara (the flow of brownish arrows on the map) but there is limited capacity for gas to flow further east into the Greater Toronto Area (GTA). The TCPL mainline system can flow gas to Niagara from the North but is constrained at Parkway – which is the main connection gate to the Enbridge Gas Distribution Company that serves the GTA (green circle on the map). 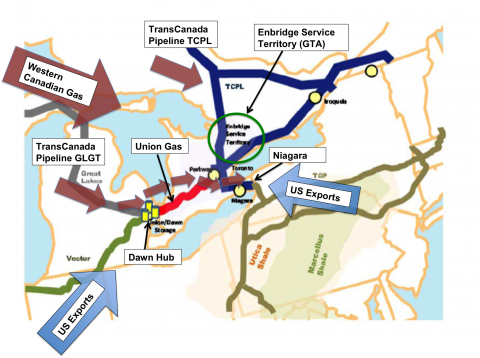 Source: Enbridge Submission to Ontario Energy Board and RBN (Click to Enlarge)

From the US side as we learned in Part I, gas is now able to flow across the border at Niagara onto the TCPL system in Ontario. This blog describes the upgrades and expansions that have been made and are in progress to allow for gas to flow to Ontario distribution points. Once in Canada Marcellus gas is able to flow west to Dawn on the Union Gas system, East to connect with the Enbridge system and to points further north or east on the TCPL mainline. You can see the new flow directions in the map below that shows the upgrades on the US side of the border flowing gas into Niagara from the Marcellus and the new flows possible on the Union gas system in Ontario. Note that the new infrastructure will still permit two-way flows so that Canadian gas can flow back over the border to the US if required during cold winter spells. 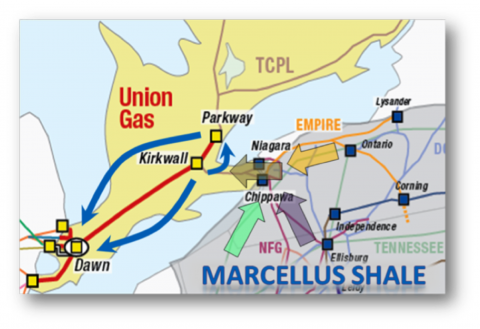 TransCanada began construction of the Eastern Mainline Expansion Project during 2012 (see map below). The project expands TransCanada’s mainline system to provide markets in Southern Ontario with additional natural gas supply from the Marcellus.  The increased supplies will also have access to markets further north and east on the TCPL Mainline in Quebec. Ironically, once Marcellus gas is flowing on the TCPL mainline through Southern Ontario it will even have access back across the border to the US Northeast market (served via the existing TCPL Waddington interface with Iroquois Gas Transmission and other export points east of Parkway). The Project also allows Marcellus gas to be shipped or traded at the liquid Dawn hub at the western end of the Union Gas system. 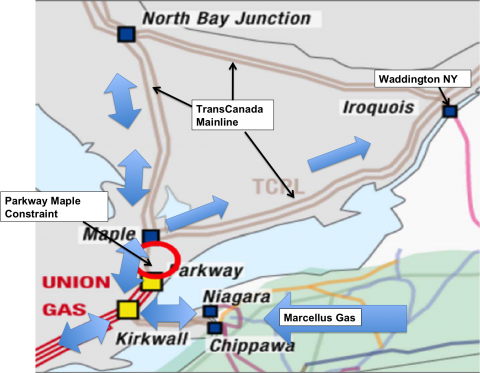 The project involves additions of pipelines that parallel portions of the existing TCPL mainline to allow for the bi-directional flow.  These loop sections overcome the existing Parkway to Maple constraint and allow TCPL to receive additional gas from Union at Parkway. The eastern section of the project was completed in November 2012 and allows Marcellus gas to flow to Maple. The remaining western sections of the project will be completed by summer 2013.

The Parkway Extension is a joint project between Union Gas and Enbridge to provide improved supply access to the Enbridge distribution system in GTA. The project involves building a new Parkway West Gate Station interconnection between the Union Gas Dawn to Parkway transmission system and the Enbridge GTA system (see map below). The new entry point will provide an additional 0.76 Bcf/d of upstream takeaway capacity from Parkway into the Enbridge Toronto service area. Enbridge supply options will expand to include Marcellus gas via Niagara as well as suppliers at the Dawn Hub. The project cost is expected to be $215 Million and will be in service during 2014. 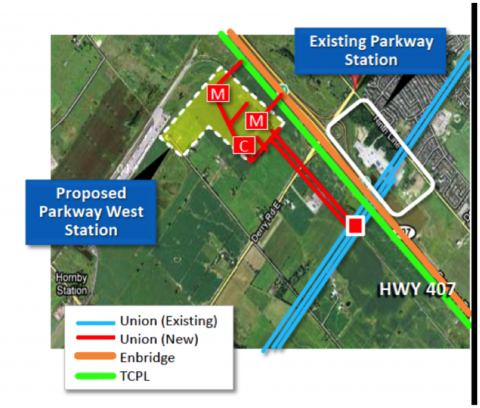 These projects have two important impacts on Ontario natural gas supplies. First they provide access for Marcellus gas supplies to flow into Southern Ontario and then either west to Dawn Hub or east to Eastern Canadian markets. Second they provide these Eastern Canadian markets with alternative supplies to the TCPL mainline. As we discussed in Part I the supply of gas to TCPL from Western Canada is declining while Ontario’s demand is increasing. During 2012 TransCanada has floated suggestions that it may repurpose part of the mainline system to flow oil from Western Canada to Eastern markets since the natural gas volumes in the pipeline are declining and customers are reluctant to pay long haul charges when ample gas supplies are available close by. In the next episode in this series we will cover plans to build a brand new interstate pipeline between the Utica in Eastern Ohio and the Dawn Hub. Those plans will supplant the flow of gas from the Rockies and the US Gulf into the Vector system at Dawn – further restricting the market for western and southeastern US gas into the Northeast US and Canada. Additional gas supplies into Dawn from the Utica will also further reduce demand for gas from Western Canada.

The flow of Marcellus gas into Canada from the Northeast US has begun. Canadians are making the infrastructure changes necessary to facilitate increased flows of gas at Niagara available to customers in Southern Ontario over the next two years. This is only the beginning. As Western Canadian gas supplies decline, the expanding Marcellus production will take their place relatively seamlessly. This expansion of Marcellus flows across the US border into Canada appears to be a far smoother process to secure a home for growing natural gas production than political wrangling over LNG export terminals.