It seems increasingly likely that Hawaii’s electric utility and gas utility will be leading the Aloha State through a multi-year transition from an oil-based economy to one founded largely on liquefied natural gas—most of it sourced from Western Canada. Hawaii Gas, which currently makes syngas from naphtha, has proposed a two-step transition to LNG that begins with ISO container shipments and follows up with bulk shipments. That meshes well with Hawaiian Electric’s plan—also a two-stepper. Today, we up update our recent series on Hawaii’s big-wave move to LNG-based natural gas.

As many of you know, the Texas Two-Step is a dance that requires a lot of coordination between its partners. They need to be “on the same page”—to anticipate the other’s moves and to make the dance look easy and natural. The same, it turns out, is true of transitioning the Hawaii energy sector (and, in reality, its whole economy) from oil to natural gas delivered to the islands as LNG. As we said in the opening episode of our recent Blue Hawaii series, Hawaii has abundant renewable energy resources, but it has no coal or oil or natural gas reserves. All of the state’s fossil-fuel requirements need to be floated in by ship; most of its power plants run on oil, and its synthetic version of natural gas (SNG) is made from naphtha, a byproduct of the state’s two oil refineries. Hawaii’s full dependence on imported oil (it’s alone among the states in that regard) makes it an unusually expensive place to live—its electricity and gas rates are the highest in the country, and its gasoline and diesel are very costly too. As if all that were not challenging enough for Hawaii’s economy, there has been concern about the future of the state’s two refineries.

Houston, We Have a Problem

We have released our tenth Drill-Down report for Backstage Pass subscribers examining the adequacy of crude storage in the Houston area, including a tabulation of major storage facilities in the region. More information about Houston We Have A Problem here.

Episode 2 of Blue Hawaii described Hawaiian Electric’s plan (unveiled in August 2014) to switch most its oil-fired units to LNG-based gas by 2017-18 (using LNG shipped in ISO containers) and to switch the rest to LNG in the 2020s (when bulk shipment of LNG kicks in). To underpin that plan, Hawaiian Electric reached a deal with FortisBC to lock in up to 800,000 metric tons/year (800 MMTA) of LNG production capacity at a planned expansion of FortisBC’s Tilbury Island liquefaction facility near Vancouver, BC, for 15 years starting in 2017. (That much LNG would provide an average of 107 MMcf/d of natural gas). The catch was, Hawaiian Electric’s plan didn’t show any apparent coordination with Hawaii Gas’s similar interest in transitioning from oil to LNG. Now, Hawaii Gas has a plan of its own and, as it turns out, the electric and gas utilities seem to be dancing to the same tune. 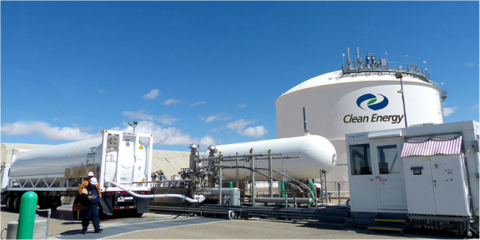 Hawaii Gas, the only franchise gas utility in the state, currently makes synthetic natural gas (SNG) from refinery-supplied naphtha on Oahu and distributes SNG to customers on the island by pipeline (see Episode 3 of Blue Hawaii). It also distributes propane to customers—some on Oahu and some on other Hawaiian islands—that are not connected by pipe. Since March 2014 Hawaii Gas has been receiving one ISO container of LNG a month from Clean Energy Fuels (see Figure #1). (An ISO container is a specialized standard shipping container size tank that holds 10 Mgal of LNG--the equivalent of 826 Mcf of natural gas). The LNG comes from Clean Energy Fuels’ 160 Mgal/d liquefaction plant in Boron, CA (a plant noted in our recent As Cold As Ice series); it is loaded into an ISO container, and shipped from the Port of Los Angeles to Oahu. There, it is regasified and fed (along with SNG) into Hawaii Gas’s distribution system. Hawaii Gas described the recent shipments from Clean Energy Fuels as a test run of LNG providing a back-up fuel for the utility. Now, Hawaii Gas wants to build on that plan. In October 2014 it asked state regulators to approve what the utility calls the “30% SNG Conversion Project,” under which Hawaii Gas would make physical changes to a site near its SNG plant (see Figure #2) to permit LNG (sourced through long-term deals with Clean Energy Fuels and FortisBC Tilbury Island facility near Vancouver) to replace three-tenths of the SNG now being fed into Hawaii Gas’s pipelines.

To access the remainder of Hawaii Two-Step—LNG by ISO Containers First, Then LNG in Bulk you must be logged as a RBN Backstage Pass™ subscriber.