Hawaiian Electric’s plan to shift quickly from oil to liquefied natural gas (LNG) based natural gas as its primary power plant fuel is ambitious, but is it broad enough to benefit from the economies of scale that a more comprehensive, state-wide LNG program might provide? Hawaii Gas, which distributes synthetic natural gas it produces from naphtha, wants to shift to LNG as its gas source too, and state policymakers and environmentalists are interested in transitioning a significant part of the transportation sector from gasoline and diesel to natural gas. Will Hawaii become an island paradise for LNG suppliers? In this final episode of our Blue Hawaii series, we consider Hawaii Gas’s LNG plans, and assess the potential for an economy-wide shift to natural gas in the Aloha State.

In our First Episode, we discussed Hawaii’s heavy reliance on shipped-in oil and petroleum products for its electricity, gas, and transportation fuels (gasoline, diesel and jet fuel), and the real worry that one or both of the state’s refineries may shut down. We also reviewed Hawaii’s unusually high energy costs, and summarized Hawaiian Electric’s plan (which still needs state regulatory approval) to switch most of its fossil-fired plants from oil to LNG by 2017-18, switch the rest to LNG in the 2020s, and import LNG from Western Canada through FortisBC’s soon-to-be-expanded Tilbury Island liquefaction facility near Vancouver. The LNG at first would be shipped in ISO containers and later—once the offloading and regasification facilities are in place—in bulk. In Episode 2 of Blue Hawaii, we discussed Hawaiian Electric’s plan in more detail, and described the significant fuel-cost savings the utility thinks are in store once it switches to LNG, ramps up its use of solar, wind and other renewables, and helps its customers become more energy efficient. The bottom line is that, once bulk shipments of LNG start in 2022, Hawaiian Electric expects LNG to provide energy at about $12.73/MMBTU—or about 40% less than the $21.25/MMBTU it would otherwise have to pay for low-sulfur fuel oil (LSFO).

Those fuel cost savings, combined with the emission reductions that come with natural gas vs. oil, seem very win-win. Hawaii Gas, though, thinks the state needs to take a bigger-picture view of things. For one, they say, LNG infrastructure is complex and expensive, and the only way to justify investing in it is if 1) there is a long-term, steady need for the LNG, and 2) you have optimized the economies of scale. As we said last time, with all those renewables coming online and with electric use per customer on the decline, Hawaiian Electric expects its LNG-based power generation (and its LNG needs) to peak almost immediately after LNG imports begin, in 2017-18, then to fall by four-tenths by 2030. As the people at Hawaii’s Dole plantation might ask, would you build a processing plant that can slice and dice 10,000 pineapples a day when you expect to need only 6,000/day of slicing and dicing capacity a few years down the road? And what about economies of scale? Hawaiian Electric is not the only entity that would benefit from a switch to LNG. So would Hawaii Gas, which wants to switch from making synthetic natural gas (SNG) from naphtha (see photo of its SNG plant below) to importing LNG. Another possible beneficiary is the state’s transportation sector, which (as we have said) pays the highest gasoline and diesel prices in the US. So why not look at the entire state’s long-term LNG needs, and at how declines in LNG use in the power sector might be offset by LNG gains in the Hawaii Gas and transportation sectors? 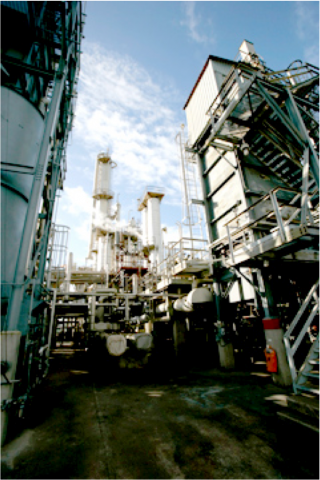 Hawaii Gas is the only franchise gas utility in the state. In fact, until recently it was simply called The Gas Company. It makes SNG on Oahu and distributes it to about 28,000 customers on the island via 1,000 miles of pipeline. It also distributes propane to another 40,000 customers—some on Oahu and some on other Hawaiian islands—that are not connected by pipe. Hawaii Gas wants to switch gradually but deliberately from naphtha-based SNG to LNG-based natural gas, ideally making the full, 100% switch when LNG can be delivered in bulk (as opposed to ISO containers) to minimize per-BTU costs. It has been dipping its toes in the LNG water, receiving its first shipment of LNG (in an ISO container – specialized standard shipping container size tanks that hold 10 Mgal of LNG)) in March 2014 and continuing to receive an ISO container a month ever since. The gas utility also has been exploring the potential for developing a Floating Storage and Regasification Unit (FRSU) in Oahu. It issued a request for information (RFI) in July 2014 and the responses suggest an FSRU to meet all of the state’s LNG needs could come online as soon as 2018-19 (three years earlier than Hawaiian Electric’s estimate). Best of all, Hawaii Gas (which will lay out its own view of the state’s LNG future in a few weeks) believes that as the electric utility’s need for LNG ramps down through the 2020s, the LNG needs of the gas utility and its customers (including the transportation sector) will rise, and keep the state’s overall LNG needs steady-as-she-goes.

To access the remainder of Blue Hawaii—Is a Broad-based Shift from Oil to LNG in the Cards? you must be logged as a RBN Backstage Pass™ subscriber.