Producers in the Bakken are making progress reducing the natural gas flaring that had put an unwelcome spotlight on the region. The fix, spurred in part by tightening regulations, is being made possible by the addition of new gas processing capacity and increased efforts to use “stranded” gas at the well-site. (A drilling slowdown associated with soft crude prices is providing an assist.) Today, we take a fresh look at what’s been happening on the flaring front in western North Dakota, where gas flares still light the nighttime sky.

The flaring of large volumes of associated natural gas in the Bakken continues to attract attention from critics. As we said a while back in Why Will Bakken Flaring Not Fade Away?, there are environmental and economic reasons for flaring. In any situation where natural gas (primarily methane, a particularly potent greenhouse gas) would otherwise be vented into the atmosphere it’s much less damaging to the environment if that gas is burned off. From an economic perspective, flaring allows oil production (which has been the primary driver of Bakken activity) to start before pipeline infrastructure is in place to take away the associated gas that is produced. As we explained in Set Fire to the Gas--The Fight to Limit Bakken Flaring, connecting wells to gas gathering systems and processing plants isn’t a cure-all. New wells produce gas at higher initial production rates and higher pressure, and gas from these new wells takes up pipeline capacity and knocks older, lower-pressure wells off the gathering system, causing their gas to flow back to the wellhead and require flaring.  It is a complicated system with no easy fix. 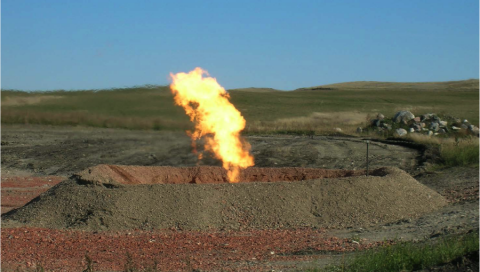 Getting a handle on flaring has been especially challenging in the Bakken, given its remote location and almost total lack of gas pipeline and processing infrastructure before oil and gas production there took off in 2010-11. A year ago, with oil (and associated gas) production in the Bakken on a tear and gas gatherers and processors struggling to keep up, the percentage of produced gas that was flared peaked at more than 36%; in December 2013, about 370 MMcf/d of the 1 Bcf/d of gas being produced in North Dakota as a whole was being burned off at a time when the Henry Hub price for gas was well above $4/MMBTU. (That’s a lot of lost revenue.) But there’s been a big push in the past year on several fronts to capture (for sale, or for well-site use) more of the associated gas being produced, and to put in place rules to limit flaring and goals to ratchet down the percentage of produced gas that is burned off (see our We Did Start the Fire series from last spring).