Way Down in the Hole - Incentives, Technology Have Carbon Capture Poised for Global Breakout
Get our Daily Blog Email

“Aruba, Jamaica, ooo I wanna take ya. Bermuda, Bahama, come on pretty mama …” While most of us trapped in the icy grip of this winter’s Polar Vortex can only dream of cruising from Florida to the Caribbean, “tropical drink melting in your hand,” Nova Scotia-based Emera Inc. has a plan to do just that (minus the drink), and on a regular, ferry-like schedule. Emera wants to export compressed natural gas from the Port of Palm Beach to its Grand Bahama electric utility and other Caribbean buyers starting as soon as 2015. The volumes of natural gas involved aren’t huge, but the plan is an example of market innovation driven by the US shale revolution. Today we examine Emera’s plan to move US gas to “the islands.”

Emera is perhaps best-known in the energy industry as the corporate parent of marketer/trader Emera Energy; as the owner of the 90-mile Brunswick Pipeline, which connects the Canaport liquefied natural gas (LNG) facility in Saint John, New Brunswick, to the Maritimes & Northeast Pipeline (MNP); and as part owner (12.9%) of the 870-mile MNP, which in addition to distributing re-gasified LNG from Canaport moves Sable Island and Deep Panuke production gas from offshore Nova Scotia into New England markets (see Deep Panuke Gas). Emera also owns Nova Scotia Power, Bangor Hydro, and power generation and transmission assets. Less well-known is that Emera owns 80.4% of Grand Bahama Power Co. (GBPC), a 20,000-customer electric utility that serves the island of Grand Bahama, the Bahamas. Emera also owns most of Light & Power Holdings Ltd. (LPH). That company owns Barbados Light & Power (BLP) in Barbados, is majority shareholder in Dominica Electricity Services Ltd. (DOMLEC) in the Dominican Republic, and is an investor in St. Lucia Electricity Services Ltd. (LUCELEC) in St. Lucia. Taken together, BLP, DOMLEC and LUCELEC generate and deliver electricity to 227,000 customers in the Caribbean Islands (see Figure 1 for a map of Emera’s assets). 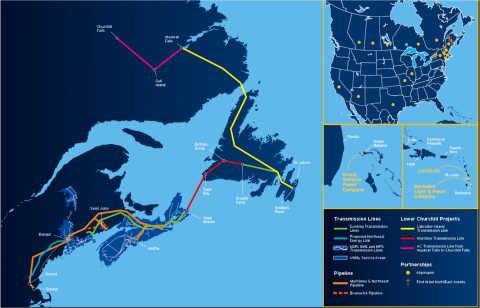 According to Emera CNG’s November 20, 2013 application to the US Department of Energy (DOE) for authorization to export CNG, the new Emera subsidiary said it envisions shipping up to 9.125 Bcf/year (or 25 MMcf/d) from a compression and loading facility Emera plans to build within the Port of Palm Beach. The primary target market is GBPC; CNG would be shipped 75 miles from southeastern Florida to Freeport, Grand Bahama, where it would be unloaded, decompressed and piped to the utility’s power plants. (Other energy consumers in or near Freeport may be future buyers too.) GBPC’S 102 MW of generating capacity currently is fired by heavy fuel oil or diesel (all of it imported), but the utility wants to convert at least some of its units to gas firing, both for economic and fuel-diversity reasons. (Lower emissions would be another benefit of the switch.) Emera CNG also sees the potential for shipping gas from the Port of Palm Beach to several other customers throughout the Caribbean, including the other island utilities in which Emera holds ownership stakes. The islands within the Caribbean region each represent too small a market to attract companies interested in exporting LNG, but US-sourced CNG makes economic sense, Emera says, because of CNG’s simple, relatively inexpensive loading and unloading requirements.

It’s worth noting here that southeastern Florida is also the potential site of a relatively small LNG export facility planned by Goven Natural Gas Holdings. Goven in December won DOE’s approval for a plan to export a total of up to 2 Bcf of LNG in specialized containers over a two-year period to five Caribbean countries: the Dominican Republic, El Salvador, Honduras, Guatemala and Nicaragua. The company has not entered into any contracts for LNG export, but wants to be able to act quickly to market opportunities as they arise. Goven is considering ports in Palm Beach, Cape Canaveral and Fort Lauderdale for its operations.