Different Strokes for Different Folks, Part 3 - How the FERC Sets Oil and Gas Pipeline Rates
Get our Daily Blog Email

The pipelines transporting Western Canadian crude oil to US markets are full to overflowing. Space on the main lines is being rationed. As much as 250 Mb/d of new production is expected online during 2013. The price of Western Canadian Select heavy crude fell to nearly $40 under NYMEX WTI during the first week of January 2013. The pressure is on to build new takeaway capacity to Canada’s west coast. Today we look at the Trans Mountain Pipeline expansion project.

We have previously discussed rising Canadian crude oil production and the challenge of finding new markets for it outside the US (see Production Stampede). The existing takeaway pipelines are already full. Last week for instance, operational issues led Enbridge to impose new apportionment on three of its main pipelines from Western Canada to the US. Apportionment reduces the actual volumes shippers can move from the amount nominated.  The 796 Mb/d Line 4, between Edmonton, AB and Superior, WI the 450 Mb/d Line 67 between Hardisty, AB and Superior and the 609 Mb/d Line 6A between Superior and Griffith, IN were affected. Although Enbridge is working to restore capacity the larger problem is not going away anytime soon. As much as 250 Mb/d of new Canadian crude production is expected online during 2013. The market reacted by increasing the discount (i.e., decreasing the price) traders paid for the heavy Western Canadian Select (WCS) crude versus the NYMEX benchmark West Texas Intermediate (WTI). The chart below shows WCS traded at nearly $40 below WTI – the lowest since December 2007. 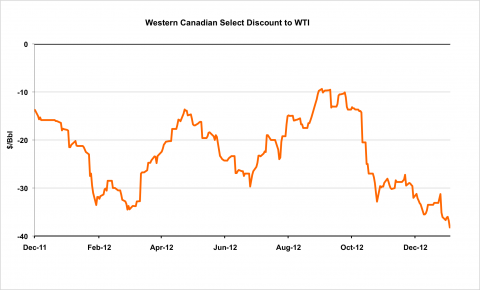 Canada exported 2.3 MMb/d of crude oil during the third quarter of 2012 up 4.5 percent from the same period a year earlier according to the National Energy Board. Ninety eight percent of Canadian crude exports go to the US – the vast majority by pipeline. The routes that Canadian producers have sponsored to deliver crude to the largest US market – the Gulf Coast refining center – have run into trouble on two fronts in recent years. First pipeline expansion projects have been delayed (eg Keystone XL) by political opposition and second Canadian crude is facing increased competition for pipeline capacity from rising US domestic production. That production – particularly in North Dakota is increasingly taking up pipeline capacity that would otherwise have been available for Canadian crude. In the short term midstream companies like Enbridge are addressing the challenge by increasing capacity on existing pipelines out of Western Canada and reversing pipelines to move crude into Eastern Canada. In the longer term Canada needs to find new markets for its crude.

Outside of the US the most obvious export market for Canadian crude is Asia – via the West Coast. Chinese demand for crude oil increased year on year by over 10 MMb/d in November 2012. The Chinese are taking a particular interest in Canadian crude oil assets. The Chinese state run oil company CNOC recently paid $15 B for Canadian producer Nexen and they have pursued partnerships with other Canadian energy companies. Other Asian companies have also purchased Canadian assets – Malaysian state oil company Petronas purchased Progress Energy. Regardless of ownership - the barrier for any Canadian crude oil exports to Asia is that they first have to reach the West Coast.

To access the remainder of West Coast Pipe Dreams – Canadian Crude Oil Pipeline Projects you must be logged as a RBN Backstage Pass™ subscriber.