A Matter of Trust, Part 4 - Adding Structure and Credibility to Carbon Offsets
Get our Daily Blog Email

Located just east of the prolific Eagle Ford shale, production from the Eaglebine play has yet to take off. In good part that is because takeaway capacity is currently limited to trucks. All that is about to change with the new 60 Mb/d Sunoco Logistics Eaglebine Express pipeline due online by the end of 2014. And last month two midstream companies announced competing pipeline projects that would add as much as another 400 Mb/d of takeaway capacity in 2016. Today we review recent developments in the Eaglebine basin. 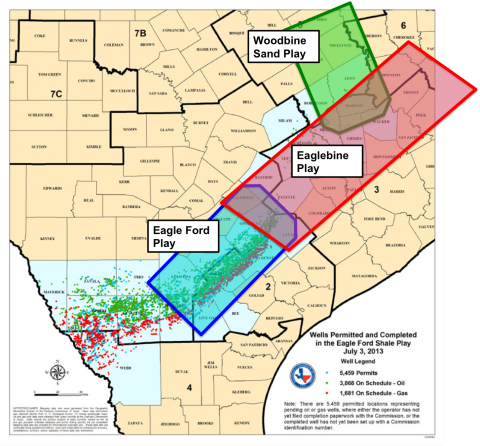 In spite of quite a lot of producer hype, actual production of oil and condensate in the Eaglebine has been slow to increase – at least according to the Texas Railroad Commission (TRC). TRC production data for the counties listed above shows that conventional drilling was producing about 15 Mb/d in January 2010 and that more than doubled to over 30 Mb/d in the Summer of 2013 but has fallen back to the mid-20’s this year. These number pale into insignificance compared to the Eaglebine’s near neighbor the Eagle Ford that has come from nowhere in 2010 to producing over 1.5 MMb/d of crude and condensate this year. Nevertheless the indications are that consolidation of assets by early players, farming in by big producer EOG (that has a joint venture with early entrant Zaza Energy) and drilling by the likes of Apache and Anadarko mean the Eaglebine has strong potential. That should be translated into higher production next year as a result of an increase in 2014 drilling.

To access the remainder of We Heard it Through the Eaglebine – New Takeaway Capacity Heralds Production Growth you must be logged as a RBN Backstage Pass™ subscriber.