Since the start of 2015, crashing crude prices have opened up a new opportunity for traders to profit while producers bite their nails. In today’s oversupplied market, prices for prompt delivery are lower than they are for further out months – a market condition known as contango. That’s when traders put on contango spread trades that involve buying and storing crude to sell at a higher price later. Rapidly rising crude inventories at Cushing (up 3MMBbl last week according to the Energy Information Administration - EIA) suggest it’s a popular strategy. Today we explain how the trade works at the Cushing, OK trading hub.

Figure #1 shows weekly crude oil inventory at Cushing, OK - the largest crude storage and trading hub in the U.S. - as reported by EIA. During the first half of 2014 crude stocks fell rapidly after new pipelines opened up to the Gulf Coast (see Texas Bound And Flyin’). In October 2014 however, crude stocks began climbing again and the pace has quickened since the start of the year (orange arrow on the chart). Some of the inventory build is related to the arrival of new supplies at Cushing to feed an expanding pipeline network to the Gulf Coast. But the chances are that much of the recent increase is due to contango spread trades. For those less familiar with the term, “Contango” has nothing to do with dancing – it’s a technical name for a market where prices in the future are higher than prices today. (We have previously described contango and its opposite, backwardation – where prices in the future are lower than today - see Crude Oil Blues and Record Stocks). Typically contango indicates an over supplied market and that is the principal reason behind the recent oil price crash – too much crude and too little demand. The current world crude glut has pushed down prices today as producers compete to sell their barrels to refiners. But prices for the medium and longer term in the futures market are higher  - presumably in the belief that the crude oversupply will eventually be absorbed and prices will start to rebound, at least to some number in the mid-$60s by 2020.   The contango spread trade - involves buying crude today at low prices (say mid-$40s), placing it in storage and selling it later at that higher price. 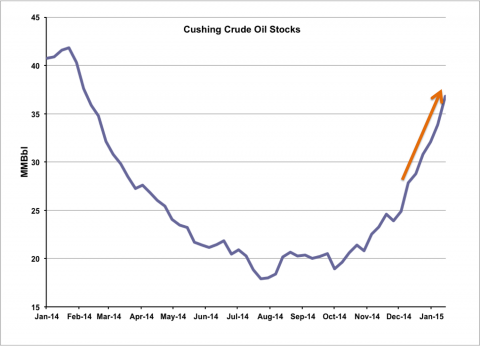 To help you understand the mechanics of a contango spread trade we will work through an example in some detail for West Texas Intermediate (WTI) crude delivered to Cushing, OK. Cushing is the delivery point for the CME NYMEX WTI futures contract and as such is an ideal location for a storage trade. Our example involves purchasing physical crude delivered into Cushing in March 2015, storing the crude for a year and then selling it back into the market in March 2016 - a one-year storage trade. We will also look at the relative merits of storing WTI for 2 years by way of comparison.

To access the remainder of Skipping the Crude Contango – The Cushing Crude Storage Trade you must be logged as a RBN Backstage Pass™ subscriber.