Crude-by-rail has saved the day for Alberta producers before, and it’s about to again. The talk of the Western Canadian province the past few days has been the Alberta government’s October 31 announcement that it will allow incremental crude oil production beyond the province’s 3.8-MMb/d cap — if that crude is transported to market by rail. Within hours of the government’s statement, a trio of major producers indicated that they now expect to ramp up their Alberta output by a total of more than 100 Mb/d over the next few months, with a good bit of the gain occurring by year’s end. Production increases from others are likely to follow, as are parallel plans to load that crude into tank cars and rail it to market. But can Alberta producers really thrive without more pipeline capacity? Today, we review recent developments in “Canada’s Energy Province” and what they mean for producers and Alberta crude prices.

In the second half of the 2010s, plans for production growth in the oil sands and elsewhere in Alberta have been stymied to varying degrees by the lack of sufficient pipeline capacity. As we said in The Shape I’m In, our spring 2018 Drill Down Report on Western Canadian crude markets, producers and midstream companies responded to these takeaway shortfalls by adding crude-by-rail capacity and by advancing a number of pipeline projects that, over time, would eliminate the constraints and enable production growth to occur pretty much unfettered. By last fall, though, production again was bumping up against, and even exceeding, the combined capacity of pipelines and railroads; crude inventories within Alberta were up sharply; and the price differential between regional benchmark Western Canadian Select (WCS) and West Texas Intermediate (WTI) had widened to an astonishing $50/bbl (navy blue line and dashed yellow oval in Figure 1), putting the cash value of a barrel of WCS at little more than $20. 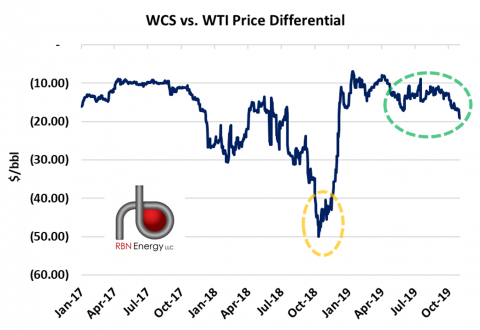 The collapse in the value of Alberta crude — plus further delays in the Line 3 Replacement, Trans Mountain Expansion (TMX) and Keystone XL pipeline projects that producers have been counting on for takeaway relief — led then-Premier Rachel Notley to announce last December 2018 that the Alberta Energy Regulator (AER) would institute mandatory production cuts for any producers in the province averaging 10 Mb/d or more over their highest six months in the previous year. Notley’s government also said it would enter into contracts to lease thousands of rail tank cars to increase crude-by-rail capacity. The government’s aim was to significantly alleviate the WCS price discount and to help tide producers over until new pipeline capacity started coming online.

The mandated 325-Mb/d production cut for January 2019 capped output that month at 3.56 MMb/d; in subsequent months, the government allowed production to rise gradually — by 75 Mb/d in February, for example, and another 25 Mb/d in April. The net effect was to bring production and takeaway capacity into closer balance, and it helped shrink the WCS-vs.-WTI spread to a less onerous $9-to-$18/bbl for most of this year (navy blue line and dashed green oval). [Last week, the “diff” widened after a Keystone Pipeline leak in North Dakota shut down that pipe.] The new government of Premier Jason Kenney, which took office in late April, further relaxed the production cut — it’s now down to 100 Mb/d, allowing production of up to 3.8 MMb/d. It also started working to untangle itself from the tank-car leases that Notley’s government had entered into, viewing them as an uncalled-for public intervention in the private sector.

And, as we noted in our introduction, the Kenney government on Halloween announced a plan to exempt from the 3.8-MMb/d production cap any incremental production that will be transported to market by rail. The exemption, which takes effect on December 1, will establish a crude-by-rail baseline for each of the province’s 16 major producers that is equal to its crude-by-rail volumes in the first quarter of 2019. Under a seemingly simple application process, a producer with an average of, say, 20 Mb/d of railed volumes in the first quarter, would ask for approval to increase its production by 30 Mb/d and provide evidence that it has a matching 30 Mb/d of crude-by-rail capacity under contract to move that incremental output.

Before we discuss how much this might goose Alberta production, let’s look at trends in crude-by-rail volumes out of Western Canada — the vast majority of them out of Alberta — over the past couple of years. The orange line in Figure 2 shows that railed volumes increased from about 100 Mb/d in mid-2017 to more than 350 Mb/d in December 2018, the month before the province’s crude production cap went into effect. With the January 2019 decline in production, crude-by-rail volumes plummeted to about 120 Mb/d in February, and quickly rebounded through the spring and summer, averaging about 310 Mb/d in both July and August, the most recent data available from the Canadian Energy Regulator (CER; formerly called the National Energy Board, or NEB). The statistics show that in the first quarter of 2019 — the period to be used to establish the government’s crude-by-rail baseline — railed volumes averaged only about 200 Mb/d. 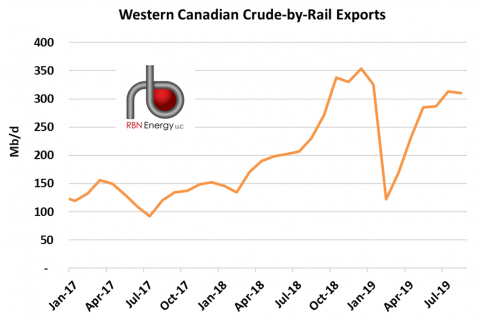 Our understanding from Alberta producers is that 200 to 300 Mb/d of additional crude-by-rail capacity beyond what’s been employed in recent months could be added to the market in short order, thereby allowing Alberta producers to increase production by a similar volume over the next few months — that is, assuming they have rail contracts to match their planned production gains. Within hours or even minutes of the government’s October 31 announcement, three leading Alberta producers said during previously scheduled earnings calls that they planned to increase production and to use crude-by-rail to move the incremental output to distant buyers.

Suncor, for example, indicated that it has 30 Mb/d of crude-by-rail capacity at the ready and that it expects to ramp up its production by that amount in the next two months. Cenovus Energy, in turn, said that while it has about 100 Mb/d of crude-by-rail capacity under contract, it used an average of only 15 Mb/d in the first quarter of 2019 — the baseline period — so it could increase its output by as much as 85 Mb/d under the government’s newly announced plan. Cenovus figures that it initially will produce 10-20 Mb/d more from its existing Christina Lake and Foster Creek oil-sands operations and put that incremental output on rail. The company also announced that it now plans to begin the start-up of its 50-Mb/d Christina Lake G oil-sands expansion project — a process that will take six to 12 months. Cenovus finished construction on the project earlier this year but had put off commissioning it due to the provincial production cap and takeaway concerns. Finally, MEG Energy indicated that it will boost its Alberta output and crude-by-rail volumes by 8-10 Mb/d to take advantage of the government’s newly announced plan. MEG has a total of 30 Mb/d of crude-by-rail capacity at Cenovus’s Bruderheim rail terminal near Edmonton, AB.

In announcing the plan, the Alberta government said that it doesn’t expect the combination of rising production and increased use of crude-by-rail to have a material effect on the WCS-WTI spread, which we agree would need to stay wide enough to support the significant cost of transporting oil in rail tank cars. Any significant shrinkage in that differential would likely price out the crude-by-rail option and require a lot more pipeline capacity to come online in order to support that same level of production. And while modest expansions to a couple of the existing pipes out of Alberta are in the works, the status of and timelines for the “Big Three” — the Line 3 Replacement, TMX, and Keystone XL — remain in limbo.

"Rescue Me" was written by Ray Miner, Carl Smith and Fontella Bass. The song was recorded in three takes at Chess Studio in Chicago, with Billy Davis producing. Released as a single in September 1965, the song went to #1 on the Billboard Rhythm and Blues chart, and #4 on the Billboard Hot 100. It would become Fontella Bass's biggest hit and one of the best-selling singles for Chess Records. Personnel on the record were: Fontella Bass (lead vocals), Minnie Ripperton (backing vocals), Louis Satterfield (bass), Maurice White (drums — later of Earth Wind and Fire), Pete Cosey (guitar), Gerald Sims (guitar), Leonard Caston (piano), Sonny Thompson (organ) and Charles Stepney (percussion). "Rescue Me" would be included on Bass's first studio album, The New Look, and would go on to be covered by many artists, including Linda Ronstadt, Diane Ross, Cher, Bryan Ferry, Roy Buchanan and Gayle McCormick.

The New Look LP was released in early 1966, and went to #93 on the Billboard Top 200 Albums chart. It was produced by Billy Miller, and recorded at Chess/Ter-Mar Studios in Chicago in November 1965.

Fontella Bass was a soul singer from St. Louis. Her mother, Martha Bass, was a member of the Clara Ward Singers, so Fontella was around music from an early age. She started her professional career as a pianist and singer with bluesman Little Milton's band. Her recording career started in the early 1960s with her singing on singles produced by Ike Turner for his Bobbin, Prann, and Sonja labels. She signed with Chess Records in 1965. Bass released eight studio albums and 10 singles in her career. She passed away in St. Louis in 2012 at the age of 72.