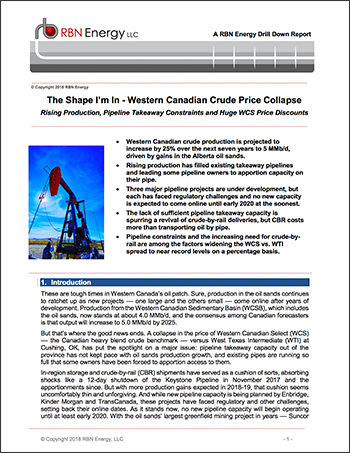 These are tough times in Western Canada’s oil patch. Sure, production in the oil sands continues to ratchet up as new projects — one large and the others small — come online after years of development. Production from the Western Canadian Sedimentary Basin (WCSB), which includes the oil sands, now stands at about 4.0 MMb/d, and the consensus among Canadian forecasters is that output will increase to 5.0 MMb/d by 2025.

But that’s where the good news ends. A collapse in the price of Western Canadian Select (WCS) — the Canadian heavy blend crude benchmark — versus West Texas Intermediate (WTI) at Cushing, OK, has put the spotlight on a major issue: pipeline takeaway capacity out of the province has not kept pace with oil sands production growth, and existing pipes are running so full that some owners have been forced to apportion access to them. And the widening WCS-WTI pricing differential is unlikely to be a short-term phenomenon.

The Shape I’m In is included in RBN Energy’s 2018 Drill Down report series, a suite of reports covering many of the key issues expected to impact the markets for crude oil, natural gas and natural gas liquids. Drill Down reports are part of RBN Backstage Pass™ premium resources that also include Blog Archive Access, Spotcheck Indicators, Market Fundamentals Webcasts, Get-Togethers and more. By subscribing to RBN’s Backstage Pass™ Premium Services, you plug into our network and get direct access to our premium resources.