A pillar of RBN’s analysis of drill bit hydrocarbons (gas and liquids produced at the wellhead) is our belief that the relationship between crude oil, natural gas and natural gas liquids (NGLs) has become far more significant during recent years than it was a generation ago. Back then oil, gas and NGL markets tended to lead separate lives and participants rarely crossed each other’s paths. Now what happens in oil markets has an impact on gas and NGL such that understanding the interrelationships between them is important. This is particularly true of the relationship between crude and natural gas prices. As we near the end of 2014, with oil prices crashing around our ears, it is instructive to revisit the relationship between crude and natural gas since before the shale revolution. We start with the absolute price relationship and get to the ratio in a minute. Figure #1 shows prices for WTI nearby futures contracts on the CME NYMEX – the benchmark for U.S. domestic crude in $/Bbl against the left axis (blue line on the chart) and prices for CME NYMEX Henry Hub, LA natural gas nearby futures contracts – the benchmark for domestic gas in $/MMBtu against the right axis (red line) since 2007. 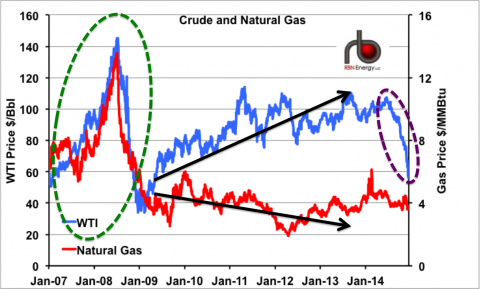 Note that between 2007 and early 2009, price movements in crude and natural gas were generally synchronized (green dotted oval). In this period U.S. production of both oil and gas was declining. The U.S. was already a big importer of crude oil – needing to meet 50% of requirements from overseas. Domestic natural gas supplies were also supplemented by imports during periods of high demand and plans were well underway to build out a network of liquefied natural gas (LNG) terminals to increase imports. Then from the start of 2009, oil and gas prices started to move in different directions (black arrows on the chart). That “Great Divide” as we have called it, was caused by dramatic changes in the supply and demand for gas and crude – brought about by the shale revolution – that led to gas and crude prices to heading in opposite directions.

To access the remainder of Ratio Ga-Ga? – Crude and Natural Gas After the Crash you must be logged as a RBN Backstage Pass™ subscriber.