Drones first made a name for themselves in the military, not just for their ability to remotely map and monitor but—when properly equipped—to target and kill. But drones are breaking through to the civilian side, and no commercial sector is more eager to explore their potential than the oil and gas industry. Some already are beginning to do so, especially in Canada, which is years ahead of the US in permitting civilian use of drones. But the US is catching up, with BP now testing drones at its operations in Prudhoe Bay, AK. In this blog, we examine what drones can do, how they already are helping the oil and gas industry, and what lies ahead.

A drone, also known as an unmanned aircraft (UA), is a power-driven aircraft (other than a model aircraft) that is operated without a flight crew member on board—sometimes autonomously by onboard computers but more often remotely by human operators “on the ground.” UAs have been in use for nearly 100 years, first as “pilotless aerial torpedoes” in World War I, but—as you would expect—have become increasingly sophisticated, computerized and smaller. In the post 9/11 era the use of drones has become widespread, initially by the military (and national security agencies such as the CIA), and more recently by police departments and the US border patrol. Because of the potential for collisions with planes and other conventional aircraft, however, the use of UAs in domestic air space has been very limited, at least so far. The Federal Aviation Administration (FAA) has been working for several years on regulations to govern commercial drones, but has been slow to implement them. In 2012, Congress approved legislation directing the FAA to put rules in place for all sizes of drones by September 2015. That deadline appears unlikely to be met, but the agency may propose rules for smaller drones (those weighing less than 55 pounds) by the end of this year.

In an interim step last summer, the FAA issued “restricted category type certificates” to two types of small UAs—AeroVironment’s Puma AE and Boeing subsidiary Insitu’s ScanEagle—for aerial surveillance over Arctic waters. In September 2013, AeroVironment successfully demonstrated mapping and inspection services incorporating UAs at BP’s Prudhoe Bay field under a “public certificate of authorization” through the University of Alaska at Fairbanks. These services included three-dimensional (3D) road mapping, 3D gravel pit volumetric analysis, visual and 3D pipeline analysis, as well as general topography and environmental monitoring services. The team also demonstrated UA use to inspect critical infrastructure, including flare stacks, oil tanks, bridges and electric lines.  This past spring, the FAA revised the Puma’s certificate to allow operations over land in northern Alaska after AeroVironment showed that the Puma could perform such flights safely. On June 8, AeroVironment (under a five-year contract with BP) became the first company to use a drone to perform routine commercial services over land in the US in compliance with FAA rules. The battery-powered Puma (pictured below) is 4.5 feet long from nose to tail, has a 9 foot wingspan, and can stay in the air for up to 3.5 hours. For BP, the Puma is fitted with Light Detection and Ranging (LiDAR) equipment and/or electro-optical and infrared sensors that produce imagery and data for processing into 3D computerized models of roads, pads and pipelines. The drone’s equipment also is used to provide highly precise volumetric measurement and topographic analysis of gravel pits BP uses at Prudhoe Bay (to keep track of how much gravel is being removed).

Another real-life example of what Puma and its LiDAR equipment will do is produce highly accurate survey maps of 200 miles of roadways built to support BP’s North Slope activities. Drill rigs that move along those roads are up to 28 feet wide, 132 feet long and weigh up to 3.5 million pounds, with a driver at each end. The LiDAR maps and GPS guidance systems will help drivers keep the drill rigs perfectly centered on the roadways, even in low visibility conditions. 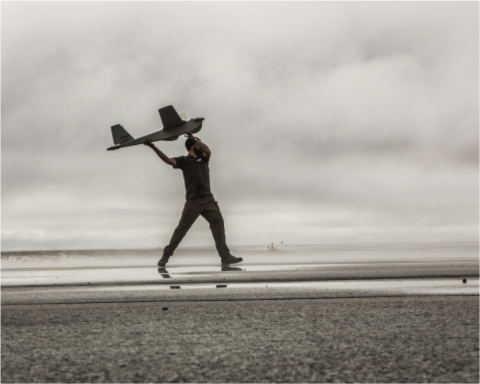 As we mentioned, Canada has been quicker to establish rules for using UAs for commercial purposes, and at least a few oil and gas companies there are known to be testing or regularly using drones for a variety of purposes. Any company that wants to operate a UA in Canada for commercial purposes must secure a “special flight operations certificate” from Transport Canada, an agency with similar functions to the US Department of Transportation. Operators must list when and where their drones will fly, and need to comply with rules on operating drones within the operator’s line of sight and maintaining buffer distances near populated areas and airports. The western Canadian oil sands region has become a hub of UA activity. Syncrude Canada has been using drones to help map reclaimed areas, and Royal Dutch Shell is said to have tested drones for land surveying at its Jackpine and Muskeg River oil sands mines. Another pioneer in Canadian UA use in the oil sands is Cenovus Energy, which since April has had at least one drone (a SenseFly eBee) at work and has indicated it plans to develop a small fleet of drones to help map and monitor three project sites. Canada’s UA rules are tough, and by their nature they do limit what drones can do; the line-of-sight requirement is particularly constraining. But rules in Canada (and, when they are finally implemented, in the US) are likely to be liberalized as technology that enables UAs to “sense and avoid” other flying objects advances and is tested. When regulators gain confidence that drones can roam safely out of their operators’ sight, the usefulness of UAs to the oil and gas industry will increase. You might ask, what can a drone fitted with LiDAR equipment or electro-optical and infrared sensors do that a plain old helicopter cannot? The answer is, not much really, but UAs are a heck of a lot cheaper. By one estimate (from the Financial Post), a drone with a heat-sensing camera to monitor a pipeline costs about $85,000 while a manned helicopter costs $3,000/hour, so the drone pays for itself in less than 30 hours of flying time. It also is safer to operate a drone from an office chair than to fly a helicopter.

To access the remainder of My Da-rona—Drones Are Preparing for Take-off in the Oil and Gas Industry you must be logged as a RBN Backstage Pass™ subscriber.