There was a lot of hand wringing and gnashing of teeth last week in energy markets, and it had nothing to do with the OPEC non-event.  Instead, the focus was Kinder Morgan (KMI), granddaddy of U.S. midstream companies, and usually a darling of analysts and media.  Not this time.   Over the past few days the stock has been hammered, Moody’s downgraded its debt, and a lot of folks in the market have been trying to figure out what is going on.   Particularly since all the hubbub would seem to be about a relatively minor investment (in energy infrastructure terms) in a pipeline called Natural Gas Pipeline of America, or NGPL, one of the oldest of the long-line systems in the U.S., which came online 84 years ago and Kinder Morgan has owned all (or part of) since 1999.  In today’s blog, we look at this pipeline system and what it tells us about the current state of the natural gas markets.

First an important disclaimer.  We are not an investment advisor.  The purpose of this blog is not investment advice or endorsement.  RBN looks at individual company information to see what the data means for the market as a whole, not for the implications for any particular company’s stock.   You should not rely on anything you read here as the basis for any decision or conclusion regarding KMI or any other security.

Second, let’s spend just a minute reviewing what happened last week. On Monday, November 30, 2015, Kinder (we’ll use the short form of the company name) and Brookfield Infrastructure Partners announced that they would acquire the 53% interest in NGPL held by Myria Holdings for $242 million. According to the press release, at the end of the day Kinder would own 50% and Brookfield the other 50%.   The next day, Moody’s downgraded $44 billion of Kinder Morgan debt to negative and the company’s stock nosedived, hitting multi-year lows each day for the rest of the week.

Kinder has a very long history with this pipe.  It came along with the original acquisition of KN Energy by Kinder in 1999 (see Kinder Morgan history) and Kinder has operated the pipe ever since.  For years NGPL was one of the highest earning pipes in the nation.  In 2008, Kinder sold 80% of NGPL to Myria, a consortium of Brookfield and SteelRiver Infrastructure Fund.

Third, let’s examine the pipeline itself. NGPL is one of the largest interstate pipeline systems in the U.S., crossing 13 states with 9,200 miles of pipeline (See Figure #1 below, more about the zones later) and 288 billion cubic feet (Bcf) of working gas storage.  The system collects natural gas directly from production in the Permian, South Texas, Eagle Ford, East Texas, Anadarko, Fayetteville and Louisiana but indirectly is supplied by nearly every other basin in the lower 48 and Canada, including the Marcellus via interconnects with the Rockies Express Pipeline (REX). Most of those grey pipes in Figure #1 that crisscross the mid-section of the U.S. are connected to NGLP in one way or another.  By volume, 35% of its 4.2 Bcf/d of receipts in 2014 were from Texas, 25% from Oklahoma and 15% from Kansas (Rockies supply).  The remaining amount, including system wide storage, was from other states, including a non-trivial 7% and increasing amount received in Illinois (coming in from growing Marcellus supply). 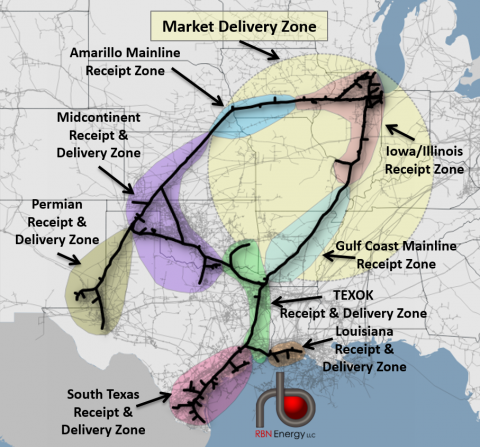 On the demand side, 42% of NGPL withdrawals are made to delivery points in Illinois, including a large Chicago local distribution company (LDC) end use market. Figure #2 below showcases how much of NGPL’s deliveries are tied to LDC demand (gray bars).  NGPL will tap even more of that demand in the future with its Chicago Market Expansion (more on this later). Texas and Indiana consume 10% and 17% of NGPL’s deliveries, respectively, while Louisiana manages only 7%.  However, Louisiana and Texas are important future centers of demand with the upcoming LNG expansions along the Gulf Coast (see Begin the Sabine and Is That All There Is).

To access the remainder of Kinder is a Cowboy, on a Steel Pipe He Rides – Kinder Morgan, NGPL and Natural Gas Markets you must be logged as a RBN Backstage Pass™ subscriber.