There hasn’t been a major new refinery built in the lower 48 since 1976. Now, no less than 5 projects to build new oil refineries are on the drawing boards in North Dakota. These projects are really “micro” refineries since they all have 20 Mb/d capacity compared to the 128 Mb/d national average of operating US refineries (source: Energy Information Administration - EIA). The projects all aim to take advantage of a shortage of refined products in North Dakota – especially diesel – as well as abundant supplies of crude from the Bakken shale. Today we review their progress.

North Dakota is producing a heck of a lot of crude oil these days, only a fraction of which is consumed in State. The latest production data from the North Dakota Pipeline Authority (NDPA) released this week indicates crude output in April 2014 just crept past the 1 MMb/d mark - up a whopping 292% from 343 Mb/d in Jan 2011. Yet the Tesoro Mandan refinery is still the only facility processing crude in the State and although it was upgraded in 2012 from 58 Mb/d capacity it now has a maximum 71 Mb/d of crude, just over 6% of current production. As we have described in previous posts and Drill Down reports (see I’ve Been Working on the Railroad), the rest of North Dakota’s production leaves the State for other refineries by rail (63% of April production) and pipeline (30%).

The Mandan refinery does not meet local refined product demand – most noticeably only producing about 20 Mb/d of middle distillate diesel range material compared to local demand that reached a peak of 63 Mb/d last August (2013). The chart in Figure #1 below shows EIA demand data for diesel fuel (mostly ultra low sulfur diesel – ULSD - for road and rail use) from 2009 when it averaged just 28 Mb/d through March 2014 when monthly consumption was 52 Mb/d.  Most of the difference between Mandan diesel supply (red line on the chart) and North Dakota demand is met by trucking or railing in fuel from Montana and Wyoming refineries. Surging diesel demand in North Dakota reflects the big increase in the State’s oil drilling and transportation activities. A blog series posted by our friends at Turner Mason in December 2013 provides a great analysis of where that increased demand for ULSD comes from. They estimated that new drilling activity in North Dakota is consuming 15.5 Mb/d of diesel with another 3.8 Mb/d needed to power trucks picking up oil from wells not attached to pipelines yet and 1.5 Mb/d to power crude by rail locomotives shipping crude out of North Dakota. Demand for gasoline has also increased in North Dakota from the State’s increasing oil boom population, although not as dramatically as diesel. 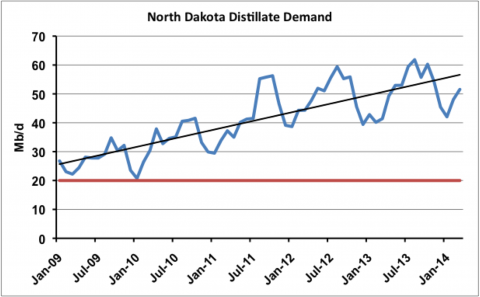 Apart from the need to meet a refined product supply deficit, refinery projects are coming out of the woodwork all over North Dakota because locally available crude and high demand for diesel mean that potential refining margins are very compelling to investors. The chart in Figure #2 below shows the refining crack spread between a barrel of ULSD sold in Chicago and a barrel of CME NYMEX West Texas Intermediate (WTI) crude delivered to Cushing, OK. This is a very simple crack spread (see Gulf Coast Diesel Crack Habit) for more on the diesel crack spread) that tells us the difference between pipeline diesel prices in Chicago and crude prices for WTI in the Midwest.  The spread averaged $29.70/Bbl over the whole period since 2012 – reflecting generally higher prices for diesel in the Midwest versus crude and has averaged close to $25/Bbl in 2014. And in reality the diesel crack in North Dakota is likely much better because Bakken crude prices in 2014 have been about $5/Bbl below WTI on average.  Although the crack spread is a very “rule of thumb” simplification of the profitability of a refinery, it indicates that these new refineries could generate healthy margins for their owners as long as current pricing relationships hold up. 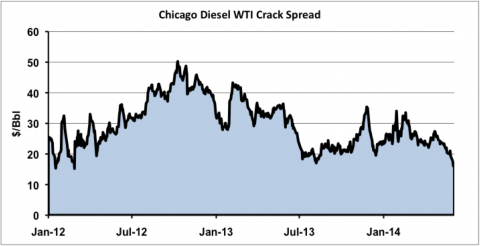 When we first covered this topic last April there were only three North Dakota refineries on the drawing board (see If You’ve Got The Money). Now that list has grown to five. The following are brief summaries of each project:

These 5 projects are very similar in size and scope, but there is not room for all of them in the North Dakota refined product market. At the moment, only the first two, Dakota Prairie (due online by the end of this year), and Thunder Butte Petroleum (which is still in Phase 1) appear to stand a chance of being completed. The other three look unlikely to get built unless they improve both their finances and their progress with permits. These two factors – environmental permits and money are probably the biggest hurdles to new refinery construction in the US. In fact the environmental issues are very likely the reason why all these projects are only 20 Mb/d capacity. Small plants fall underneath the more powerful regulatory radar of the Environmental Protection Agency (EPA) and only need to apply for State Air Permits in North Dakota (even these do not apply to the MHA Nation). The second big hurdle is getting investor backing for projects ranging in cost from $200 Million to $450 Million. Because typical refineries take decades to provide a return, investors have to look beyond short-term price advantages such as today’s favorable crack spread. There might be buoyant demand for diesel in North Dakota in 2014 but will the drilling boom last 20 years? Other challenges for these small projects are how to offload the less valuable byproducts of refining such as fuel oil and NGLs -- and the lack of a pipeline transportation infrastructure that means products must be sold nearby to sustain high margins.

Nevertheless, the fact that at least one and possibly two of these refineries will get built with one online at the end of 2014 is a testament to the renaissance of US refining in the oil shale era. Although it is unlikely we will see a spate of new refineries popping up around the US, there is a good chance that specialists like Calumet will continue to develop smaller refineries successfully where there is market need for refined products and access to local crude oil.

If You've Got The Money I've Got The Time was written by Left Frizzell and Jim Beck in 1950 and was a #1 COuntry Hit for Lefty. Willie Nelson took his version to #1 in the Country chart in 1976

I asked this on an older stale post, so may not have not been seen by many people.

Anyone have any ideas?

There are a numer of Maxim type skidded refineries in Bakken.  These only extract the diesel fraction in the oilfield for offroad uses.  The balance of the product stream is returned to the crude stream.The problem is that there is not enough local market for other refined products in the immediate area.Also, Bakken is very high in light ends, thus downstream units to convert the gases from the crude unit are needed.