The wide scale adoption of crude-by-rail transportation since 2012 means that in the U.S. alone by the end of 2013 more than 740 Mb/d was being shipped to market by railroads or about 11 percent of domestic production (source: American Railroads Association). That percentage will continue to increase.  RBN Energy research indicates that around 171 rail loading and offloading terminals have been built or are under development throughout North America since 2011. Pipeline infrastructure build out and increased regulatory scrutiny of rail tank car safety have not slowed the use of rail in production regions such as the North Dakota Bakken. Today we review the new RBN Energy Drill-Down report on crude by rail.

Over the past two years RBN Energy has covered the emergence of crude-by-rail extensively but we have necessarily done so in an episodic fashion in keeping with our daily blog post format. All of that research has now been pulled together into one comprehensive report that is available exclusively to RBN Backstage Pass subscribers. [We talked about Backstage PassTM in our blog post yesterday ]. During 2014, RBN will publish twelve of these deep-dive reports, one every four weeks or so.  This blog provides highlights of the Crude-by-Rail Report (link provides access to the first few pages and the Table of Contents of the report)..

The report starts by detailing the circumstances that led to crude-by-rail emerging as a cost-effective alternative for producers to get supplies to market. It then identifies key participants, provides a primer on crude transportation costs and netback calculation, and offers a comprehensive listing of rail loading and offloading terminals now in operation or under construction in the US and Canada. The study concludes with several trends to watch, a section on crude-by-rail/safety regulation and a forecast of what’s next for crude-by-rail.

Moving crude by rail is certainly not a new development. In fact it predates pipelines, which only became commonplace in the second half of the 20th Century. Since then pipelines have dominated movement of crude over long distances because they have been considered safer and more economic. As recently as 2010 more expensive rail movements had been relegated to a marginal role in US crude distribution. The resurgence of crude-by-rail in the past three years was initially born of necessity - driven by surging crude production – primarily from tight oil U.S. shale plays.

According to the Energy Information Administration (EIA) U.S. crude oil production jumped almost 1 MMb/d to 6.5 MMb/d in 2012 and will increase another 1.5 MMb/d to 8 MMb/d by the end of 2013. The crude basins that have experienced the greatest growth over this period are the Bakken in North Dakota, the Eagle Ford in South Texas and the Permian in West Texas. Canadian production also increased – albeit at a slower pace – up 230 Mb/d to 3.4 MMb/d in 2012 and an estimated 300 Mb/d to 3.7 MMb/d in 2013 (source: National Energy Board). Growth in both US and Canadian production is forecast to continue well into the next decade.  Traditional paths to get this crude to market – in the shape of pipeline infrastructure - were planned but could not be built quickly enough to keep up with growing production. 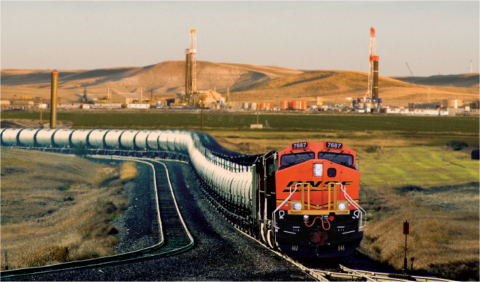 Unexpectedly rapid increases in domestic production caused existing pipeline routes to market to become congested starting in late 2010 – particularly in the Midwest at the Cushing, OK hub. Too much oil from surging North Dakota and Canadian production overwhelmed Midwest refineries and could not find a path to plentiful coastal refining capacity because pipelines were not yet in place. Congestion in the Midwest led to crude stockpiles at Cushing and big discounts for inland crudes priced against West Texas Intermediate (WTI) crude – the domestic US benchmark.  Unable to secure supplies of these cheaper inland crudes, coastal refiners had to pay higher prices set by imported grades priced against the international benchmark Brent.

To access the remainder of I’ve Been Working on the Railroad – Crude By Rail – An RBN Energy Drill-Down Report you must be logged as a RBN Backstage Pass™ subscriber.