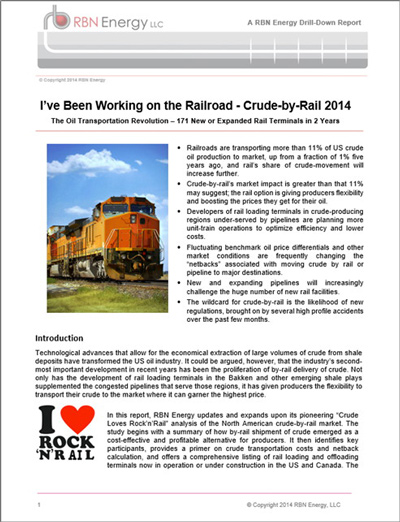 Over the past two years, crude-by-rail has revolutionized oil transportation in the U.S. From what started as a short-term response to the lack of pipeline capacity in the Bakken, crude-by-rail has evolved into a mainstay of the crude oil market, forever changing the economics of moving oil from production fields to refineries.

In a new definitive study assessing the magnitude of the crude-by-rail phenomenon, RBN Energy examines infrastructure requirements, transportation costs, price differentials and many other issues involved in the build out of crude-by-rail infrastructure. The report, titled Crude-by-Rail 2014 – I’ve Been Working on the Railroad, catalogs 171 New or Expanded Rail Terminals that have been or are being developed. This 65 page analysis describes how railroads have increased their market share of U.S. crude oil transportation from only a fraction of a percent five years ago to more than 11% today. It also demonstrates why crude-by-rail’s market impact is greater than that 11% may suggest because the rail option is giving producers marketing flexibility and the ability to boost the prices they get for their oil.

Other key issues covered in the report include:

Crude-by-Rail 2014 – I’ve Been Working on the Railroad is the first of RBN Energy’s Drill Down report series, a suite of twelve reports coming from RBN during 2014 covering many of the key issues expected to impact the markets for crude oil, natural gas and natural gas liquids.