Energy markets are red hot and are showing no signs of cooling off anytime soon. Natural gas prices have soared 20% to $ 4.615/MMbtu in just the last couple of weeks and could soon breach $5/MMBtu. In the NGL market, propane prices are up to $1.17/gal, the highest level for the month of September since 2011, with the possibility of shortages threatening domestic suppliers this winter. Even crude oil has continued to find support near the $70/bbl range, providing remarkable drilling and completion economics for well-positioned E&Ps. All these markets are data-intensive, and it can be a challenge to keep up with the most important developments. That’s what our ClusterX app is all about. It delivers to your phone or browser everything we believe is important as soon as the information hits RBN databases. And it is free! In today’s blog, we’ll look at some of the key capabilities of ClusterX, including a number of new features we’ve added.  Warning: Today’s blog is a blatant advertorial for ClusterX.

If you are a regular in the RBN blogosphere, you probably already frequent our articles, report summaries, and time-series data in ClusterX. A lot of folks signed on for the app back in June when we did a major upgrade, expanding our coverage from NGLs to include crude oil, natural gas, refined products, and renewables. We also added summaries of each of our subscription RBN reports and recaps of major energy market developments of the day from a variety of sources. Most importantly, we rolled out a new, easier-to-navigate user interface and set the price as FREE!! Yup. The new features that we introduced are included in what we call our Energy Market Fundamentals channel, which is yours for absolutely no cost. This is no intro offer. It’s totally free. Don’t believe it? Check it out right now. Click on any of the “cells” in the block below, and you can see examples of what’s in the ClusterX app. Click on the “Go to ClusterX” button or any of what we call “Headliners” down below the block and you’ll go straight to the app itself. Just accept the “Terms and Conditions”, then hit the Enter button and you are in.  No log-in necessary.

ClusterX is all about pulling together — or clustering — articles, report summaries, and time-series data in one easy-to-access information hub. It is built around the concept of cells. A cell is a container for numeric data, text, images, and videos. Cells contain this information, formatted in a way that best depicts what the cell is about. There is some data on the surface of the cell, like a price, an image, a table of statistics, or the name of an article. If you click on that cell you get a lot more information on the inside, like graphs of historical data, market data tables, articles, reports, news releases, etc. The individual boxes in the block above are cells.

Data is automatically fed into the cells as it becomes available. Some data and cells are near real-time, or delayed futures quotes. News stories and other information is fed into cells during the day as events and alerts happen. Settlement futures, current-month prices and a number of important market ratios for the day are posted about 7 p.m. Central Time, when final numbers become available. EIA stats are plugged in when the EIA data is published.

Here’s some of the most important information that gets incorporated into ClusterX on a daily or weekly basis:

One of the cells submitted yesterday by a member of the RBN analytics team was titled “Northeast Natural Gas Production Hits 7 1/2 Month High” and graphically depicts the trajectory of natural gas production volumes in the Marcellus/Utica region.  The graphic and description in Figure 1 below is what you get when you click on the cell.   The idea is to summarize important market developers so you can quickly see what’s going on, without wading through megabytes of online content. 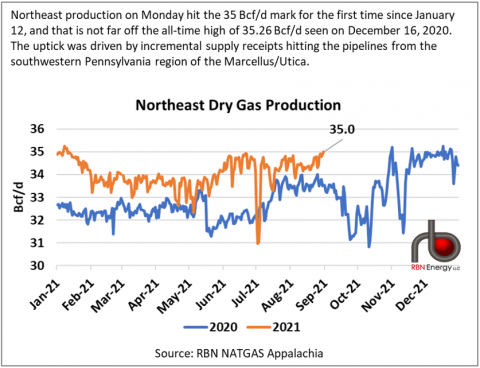 Does this look like something you would like to share with a colleague? Now it’s easy to do. Just click on the three dots on the surface of the cell (in the left corner), then the share button on the next screen (where the blue arrow points in Figure 2, left image), that gives you the choices in Figure 2 right image, and you can send the cell to Twitter, Facebook, LinkedIn, or email. (The only catch is that email only sends the link to the cell, not the picture of the cell itself.)

During the day, what happens if you notice we missed something important? Do you have some news of your own that has not made the prime time outlets? Is there energy market data available we ought to include? We are wide open to suggestions. Just send an email to support@clusterx.com and we’ll put it on the agenda in our analysts meetings and let you know if it makes the ClusterX cut.

We hope you will join us on this journey to reimagine how to organize and understand energy market information. As a reader of RBN’s blog, you have immediate access to ClusterX via both your browser and your mobile device. JUST CLICK HERE!

Aja was recorded between August 1976 and July 1977 at Producers' Workshop and Sound Labs in Hollywood, Village Recorder in West Los Angeles, Warner Bros. in North Hollywood, and ABC and A&R in New York City. Produced by Gary Katz, the album was released in September 1977. It went to #3 on the Billboard Top 200 Albums chart and has been certified 2x Platinum by the Recording Industry Association of America. In July 1978, Aja won the Grammy Award for Best Engineered Recording-Non-Classical. As always, Fagen and Becker's dark, humorous, twisted lyrical themes on the record harkened back to the best of the beat writers such as William Burroughs, whose Naked Lunch provided the band's name. An amazing 32 first-call session musicians were used in the making of the LP. Three charting singles were released from Aja.

Steely Dan is an American rock band formed in 1971 at Bard College in Annandale-on-Hudson, NY, by Donald Fagen and Walter Becker. In 1974, the two retired the band from live performances to become a studio-only band. They disbanded the group in 1981 and reformed it again in 1993, with a return to live performances. Steely Dan has released nine studio albums, two live albums, seven compilation albums, and 21 singles. They have sold more than 40 million records worldwide. Donald Fagen has released four studio albums and Walter Becker has released two. Nine members have passed through the band since its inception. Walter Becker died in 2017. Donald Fagen continues to record and tour with various musicians under the Steely Dan banner and as a solo artist. Steely Dan starts a new tour in Miami in October 2021. Fagen's next solo album, The Nightfly Live, and a new Steely Dan album, Northeast Corridor Steely Dan Live, will be both released in September 2021.