Vacuum gas oil or VGO is one of those mystery products talked about by refiners but barely understood by those of us that are not engineers. However it is an important intermediate feedstock that can increase the output of valuable diesel and gasoline from refineries. Lighter shale crudes such as Eagle Ford can produce VGO material direct from primary distillation. Today we shed some light on this semi-finished refinery product.

A couple of years ago we posted a two part “tutorial” series on refinery operation basics (see Complex Refining 101 Part 1 and Part 2). The second part of that series described upgrading units in a typical complex refinery that process the heavier and less desirable residual oil output from atmospheric distillation into lighter and more valuable refined products. The first of the upgrade processes that we described occurs in the vacuum distillation column (VDC).  Vacuum distillation recovers gas oil from the residual oil. In layman terms vacuum distillation involves heating the residual oil in a vacuum so that the boiling point temperature is reduced. This allows distillation at temperatures that are not possible in atmospheric distillation since otherwise coke from the heavy residual oil tends to solidify. Vacuum distillation breaks out light and heavy gas oil fractions leaving vacuum residuum that can be further processed by a coker unit or sold as fuel oil (see Yo-Ho-Ho and a Cargo of Bunkers for more on fuel oil). The light and heavy gas oils output from the VDC are known generically as vacuum gas oil or VGO. There are many different names used in the US and worldwide for VGO but the basic division is between light VGO (LVGO) and heavy VGO (HVGO). When VGO is traded the sulfur content is also important since lower sulfur VGO (0.5% or less sulfur) is more valuable than 2% high sulfur VGO. 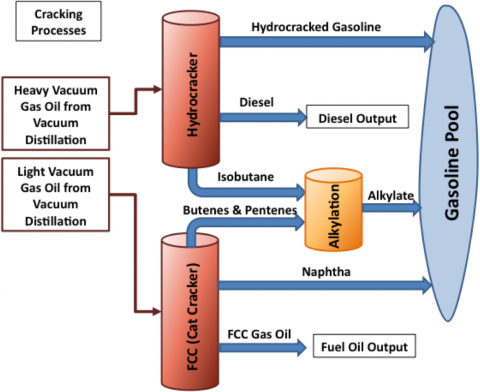 At this point, before we get too deep into the refinery engineering, we should warn you that RBN is not a refinery engineering company. So if you are looking for that level of understanding, then please consult our friends at Turner Mason Company. This description is deliberately aimed at the general audience and describes processes that vary considerably by refinery.

In a typical complex refinery such as are common in the United States – particularly on the Gulf Coast, VGO is further processed in one of two types of catalytic cracking units. These “cracking” units use a combination of catalysts (a substance that accelerates chemical reactions) heat and pressure to crack VGO into lighter gasoline blending components and diesel. As you can see in the diagram of the processes in Figure #1, a fluid cat cracker (FCC) is typically used to process LVGO and a hydrocracker is used to process HVGO. Both types of cracker produce gasoline blending components and diesel but the hydrocracker produces more diesel and the FCC more gasoline. One process difference between them is that the hydrocracker uses a feed of hydrogen to remove sulfur and other impurities from the gasoline and diesel fuels that are produced. By adding hydrogen, the hydrocracker also boosts the volume of diesel and gasoline output – by as much as 20 percent compared to the VGO input. We posted a blog on Valero and Marathon’s recent investments in hydrocracking capacity last year (see Pump Up the Volume). We are not going to go through the various cracking processes shown in Figure #1 here – they are described in the Refining 101 Part 2 blog. We have also posted a blog describing the value of the alkylation process shown in orange on the diagram (see Skipping the Alkylate Fandango).

To access the remainder of Going to a VGO? – The Intermediate Feedstock You Wish You Knew! you must be logged as a RBN Backstage Pass™ subscriber.