While many companies in the energy sector – particularly in the producer community – are licking their wounds and reporting lower profits and reduced capital expenditure to their stockholders this quarter, refiners have continued to thrive. Lower refined product prices have begun to increase domestic consumption of gasoline and diesel in the face of longer-term decline trends. And strong refining margins continue to encourage high levels of refinery utilization. Today we start a two-part look at how U.S. refiners are faring after the oil price crash.

The 50% plunge in crude oil prices since June 2014 has been accompanied by a parallel fall in prices for refined gasoline and diesel. As a result, the market expectation has certainly been that lower prices for gasoline and diesel will encourage consumption by consumers and industry – potentially reversing a decade long decline in domestic demand for motor fuels. The chart in Figure #1 shows national data from the Energy Information Administration (EIA) over the past 5 years for “apparent demand” for gasoline (red line) and distillate (the generic term for all forms of diesel – blue line). We provided a step-by-step guide to the calculation of apparent demand for gasoline a while back (see No Apparent Demand) and the distillate calculation uses the same equation. Essentially apparent demand is an estimate of how much gasoline or diesel is consumed nationwide on a daily basis based on a balance of refinery production, imports, exports and changes in inventory. The statistic is a reasonable compass for demand at the national level but loses accuracy at the regional level because it is more difficult to track movements in and out of the EIA Petroleum Administration Districts for Defense (PADDs). 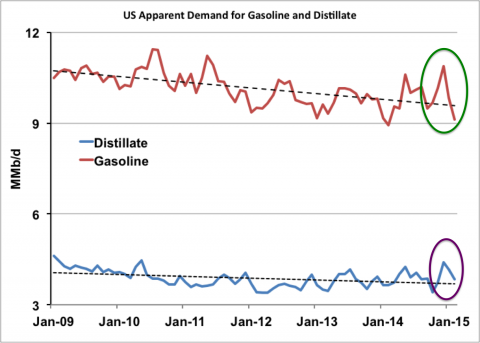 As the trend line chart shows, demand for gasoline has been falling in the last several years – mostly in response to higher fuel efficiency standards and the replacement of about 10% of gasoline at the pump with ethanol blends under federal renewable fuel standards (see Ethanol Gasoline and Refineries: Another One Bites The Dust). Diesel demand, which averages about 38% of gasoline volume, has also been falling at a similar pace in part because of substitution by natural gas for heating oil (counted in the distillate numbers). However if you look at the recent data – since the oil price crash began in June 2014, you can see the indication of an uptick in both gasoline and diesel demand (green and purple circles on the chart). That demand uptick occurred in the 4th quarter of 2014 but has been followed by a decline to more usual levels in January and early February of 2015. For gasoline a winter decline is normal because consumers drive less but for diesel it may reflect a milder than usual early winter reducing the use of diesel for heating fuel. We’ve heard about increased sales of gas-guzzling SUV’s in response to lower prices but it is too soon to call a demand led refining revival.

To access the remainder of Don’t Stop The Party – Why Refiners Kept On Dancing As The Crude Price Collapsed you must be logged as a RBN Backstage Pass™ subscriber.