Using the US natural gas production boom to promote the idea of a sustainable “global gas glut”, Asian importers have successfully managed to chip away at the longstanding oil-indexed pricing mechanism for liquefied natural gas (LNG) overthe past two years. While oil-indexation in LNG contracts will certainly not disappear overnight, the shale revolution has provided gas importers with significant negotiating leverage and a new degree of pricing flexibility. Today we examine the trend toward more US centric LNG pricing.

These developments are historic because Asian LNG prices have long been linked to the monthly average of a basket of imported crudes known as the Japanese Crude Cocktail, or JCC. This linkage of LNG to oil prices is also referred to as oil-indexation. The pricing of JCC contracts generally reflect the fact that one thousand cubic feet of natural gas (Mcf) contain one-sixth (16.67%) the energy content of a barrel of oil – a relationship often referred to as “oil parity.”  In simplified terms, the pricing formula for Asian LNG is therefore: (0.1667 x JCC) + a negotiated premium. Typically, the contracts are also designed to protect buyers and sellers from exceptionally high or low oil prices. For example, contract price increases are often flattened to lessen the burden on the buyer when oil prices exceed a pre-agreed band ceiling or the supplier when oil prices fall below a band floor. The premium component of the LNG contract can also be adjusted to compensate for extreme volatility in oil prices.

Under a JCC formula a crude basket price of $100/Bbl would yield an LNG import price of $16.67/MMBtu + the premium, a rough proxy of what Asian markets were paying in January 2014 – $18.95/MMBtu according to the Platts Japan/Korea Marker (JKM). With the US natural gas benchmark (Henry Hub, Louisiana) currently trading at $4.93/MMBtu (February 6, 2014), LNG prices in the Far East are approximately three and a half times higher than what US buyers are paying. And of course US natural gas prices are considerably higher now than they were before this year’s harsh winter. This disparity between US natural gas prices and crude – referred to many times in RBN Blogs in our analysis of the breakdown of the traditional crude- to-gas ratio as a result of the shale revolution (see for example Ratio GaGa) – has led to a decoupling of regional gas prices since 2006.  Asian nations have been particularly hard hit. Figure 1 shows how US and Canadian prices fell well below equivalents in Japan and Europe during 2012. 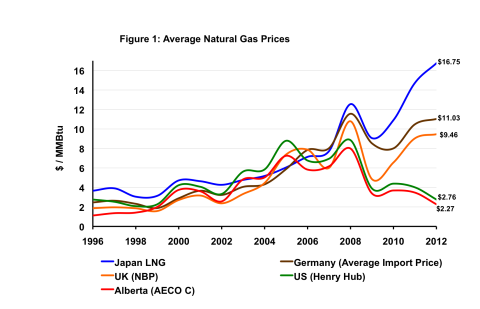 The resulting higher energy costs have had a profoundly negative economic impact on Asian economies in general and in particular on Japan’s balance of payments. Traditionally a net exporter, Japan has recorded 17 straight months of trade deficits, largely due to inflated LNG prices after the Fukushima disaster (source: Bloomberg, 11/19/2013). Unhappy with these developments and emboldened by the growing prospect of natural gas exports from North America, prominent Asian buyers led by Japan and India have sensed the opportunity and formed a consortium to aggressively lobby for lower LNG prices. Leading importers in Asia are clearly frustrated with the persistence of oil-indexation in LNG contracts and seem motivated to implement new pricing arrangements.

Under normal market conditions, Japan and South Korea would hold significant negotiating leverage as the largest importers in an increasingly gas-saturated world. However, a lack of domestic hydrocarbon resources and a shift away from nuclear energy post-Fukushima have partially offset this advantage. Suppliers are well aware of the increasing reliance of Asian economies on natural gas imports, as illustrated in Figure 2 below. The chart shows compound annual growth rates (CAGR) of 7.87 percent in Asian LNG demand through 2014 while European and North American demand is declining and Latin America demand is flat. 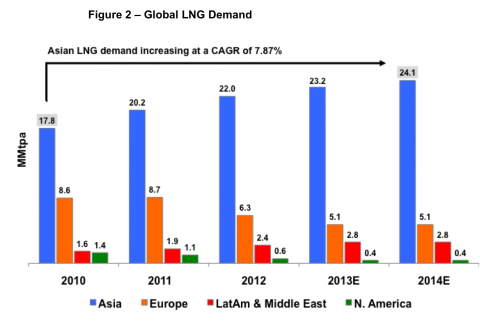 So for natural gas producers looking to export LNG the question of how to price their long-term contracts with Asian buyers have become delicate. On the one hand, nations like Japan and Korea remain heavily dependent on a reliable stream of LNG imports. And China’s appetite for natural gas is expected to more than double between 2013 and 2020 (see Figure 3). In the circumstances, Asian buyers should theoretically be price takers. On the other hand, as shale discoveries increase and more LNG projects come on-stream across the globe, producers fear being undercut by their competitors. Since most LNG projects require multi billion dollar investments to build liquefaction facilities, they cannot be financed until the pre-contracting of future output is securely in place. As a result the producer’s haste to secure long-term commitments plays into the hands of buyers looking for lower prices.

To access the remainder of Courtesy of the Red, White and Blue: How the US Shale Gas Boom Benefits Asian LNG Importers you must be logged as a RBN Backstage Pass™ subscriber.