Last Thursday (January 31, 2013) a high frequency trading event about 400 milliseconds before the scheduled EIA Storage data release set off a frenzy of selling in the NYMEX Natural Gas futures market. Some analysts believe that the storage report could have been leaked. Others blamed computer timing issues.  These events resurrected ghosts of EIA storage numbers past and inspired our examination of these developments in the context of the evolution of high frequency trading in energy markets.

Every Thursday at 10:30am Eastern Time, the Energy Information Administration (EIA) releases the Weekly Natural Gas Storage Report, definitely the most widely followed piece of fundamental data monitored by US natural gas traders. The report is seen as a snapshot of the demand / supply balance in the US natural gas markets. High levels of injections in the summer (normalized for weather conditions) are an indication of robust supply and/or lagging demand, and send a bearish signal to the market. High levels of withdrawals in the winter (again, adjusted for weather) are likely to produce a spike in natural gas prices. Thursday morning is also a moment of truth for the entire cottage industry of storage forecasters whose weekly predictions are tabulated, distributed, ranked, sometimes praised and/or ridiculed by the industry newsletters and news reporting organizations [1]. The quarterly ‘accuracy’ ranking (an equivalent of a school report card) may break or make the career of an aspiring fundamental analyst or natural gas trader. The storage number is often misinterpreted by end users.  And according to some observers, the number’s release is increasingly being used as a window for high frequency traders to “attack” the market.  We’ll explore these issues below.

First of all, this is not a report of storage injections or withdrawals. The report is an estimate of working gas in storage and weekly flows in and out of storage are implied by week-to-week changes of the overall levels. Injections and withdrawals account for most of the inventory level changes but other factors may intervene from time to time. Unavoidable noise in the data comes from accounting changes (reclassification of cushion gas [2] as working gas or vice versa) and potential mistakes. The weekly report is based on a sample of natural gas storage facilities. It is a very large sample (relative to the entire population of natural gas storage facilities) but a sampling error is unavoidable.  Anybody who has been in this business long enough knows that these factors can intervene when they are least expected and can inflict a lot of pain on unsuspecting traders and others who rely excessively on these statistics.

During my Enron days [Vince was Managing Director for Research and Quantitative Modeling at Enron from 1992 to 2002 – rb], the group I managed was responsible for forecasting storage levels (reported at the time by the American Gas Association (AGA). The storage number was just as important back then, and it was a big factor in the development of the company’s gas trading strategies.  I was called on the carpet one day by my boss and taken to the woodshed for producing a prediction diverging widely from the reported storage level for the week. I had a good explanation: the reported number was likely to be wrong and the trading floors from Houston to New York City agreed.    This excuse was not good enough. My boss told me that he did not want a forecast of true storage numbers. My job was to predict AGA mistakes. Additional excuses did not work either. Yes, we could predict with some success systematic, i.e. regularly occurring, mistakes.    We knew from experience, I told my boss, that the storage numbers are often incorrect around long weekends (the 4th of July, Thanksgiving, Christmas). Not only does the demand diverge from typical levels, throwing a monkey wrench into quantitative models, but often the pipeline’s employees in charge of submitting storage numbers are on vacation. They might submit a guesstimate or repeat the previous week’s storage data. Eventually, those errors are corrected in the next submission but the storage numbers are off the mark two weeks in succession. “Not good enough,” my boss told me. “You have to predict a mistake each time it happens and do it better.”   Oh, those were the days my friend (link to sing along video).

On some occasions the amount of pain inflicted on the market by storage report errors can be astounding. Seasoned industry veterans still remember November 24, 2004. This description of the event is extracted from the comments submitted to the Federal Energy Regulatory Commission (FERC) by the Public Service Commission of the State of New York: [3]

“According to published accounts, the November 24th report was revised after EIA determined that Dominion Transmission Inc. (“DTI”) erroneously over-reported its storage withdrawal volumes by a substantial amount.[…] Because the cumulative storage withdrawals (inflated by the incorrect DTI figures) were apparently significantly higher than what the market expected, publication of the erroneous withdrawal data in the WNGSR (Weekly Natural Gas Storage Report) caused a spike in natural gas futures prices on the NYMEX. […] The problem was exacerbated by the fact that November 24, 2004 was the closing date for November NYMEX futures, thus influencing December contracts indexed to the November NYMEX closing price. […] The Office of Market Oversight and Investigations (“OMOI”) of the Federal Energy Regulatory Commission estimated that the overall shift in value as a result of the error might have been as much as $1 billion.[…] An OMOI spokesman was also quoted as saying that the price spike “would have affected residential and commercial customers.”

The price spike in question was a $1.183/MMBtu jump from the close for the previous day. There were other factors contributing to the spike. The report was released on Wednesday, ahead of the Thanksgiving holiday, later during the day than normal, when many traders were ready to pack up and call it quits on a day that is typically slow and uneventful. What was unknown to the market participants was a large Exchange for Swaps (EFS) transaction that reportedly took place on the same day and contributed to unusual price dynamics.

Traders who make the EIA Storage Report the linchpin of their weekly trading strategy today have to worry about another development: high frequency trading. On January 31, 2013, about 400 milliseconds before the scheduled EIA Storage data release, the entire natural gas complex, including the NYMEX futures and exchange traded funds (such as UNG) came under attack. One can find graphs illustrating the market activity around the EIA report release time on this day on the web site of Zero Hedge. Zero Hedge used information provided by Nanex, a leading high frequency research and software firm. Please, see the information available at http://www.zerohedge.com/news/2013-01-31/todays-nat-gas-news-leak-3-d-action. We include below one of the graphs with kind permission from Nanex. 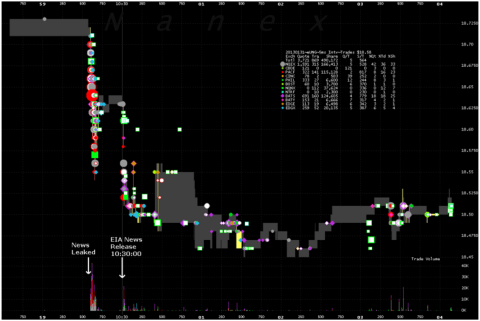 The graphs available on the Zero Hedge web site show trading in UNG, natural gas futures and other related instruments between 10:29:59 and 10:30:04 last Thursday morning. They can be interpreted as follows:  about 400 milliseconds before the EIA release, someone (or some computer program) started selling like crazy.  Note the trading volume at the bottom of the chart.  Then the trading tails off for a few milliseconds before starting back up when the EIA Storage Report was released.  Admittedly that looks suspicious, and the folks at Nanex annotated the action ‘News Leaked.’

Conclusive evidence of a leak? We beg to differ. As we learned from experience, there are no reasons to look for a diabolical conspiracy where strong egos, courage of one’s convictions, or plain incompetence are sufficient explanations.

My conversations with natural gas traders last weekend and over a few glasses of our favorite poisons led to a different conclusion. The traders I talked to detected several instances of front running of the EIA reports, in most cases roughly within a minute of the release time.    The conditions under which front running is successful include a high degree of consensus regarding the expected storage number among the market participants (i.e. low dispersion of the forecasts). Going against the consensus in this case is a relatively low risk strategy. If the market (defined as a majority of the traders) is wrong, the bet will pay off. If the market was largely correct, the reaction is likely to be muted and a contrarian bet can be reversed without incurring a significant loss. An additional factor may be a contrarian storage forecast in which a high frequency trader has a lot of confidence.     Of course, trading natural gas is not for the meek. There is always a possibility that, in spite of low a dispersion of forecasts, there are some market participants with a lot of fire power who will trade against the front runner.

To summarize, the most likely explanation is a trading blast based on high confidence regarding the quality of a specific firm’s storage forecast and the expected market reaction. A high frequency trading (HFT) firm was probably just front running other markets participants.   Synchronization of clocks (the HFT trader vs. the EIA) is another likely explanation.  A trader may have inadvertently jumped the gun. Whatever the reason, natural gas traders have to add another item to the “Don’t Forget” list: the potential for high frequency algorithms going berserk from time to time. Nanex could very likely become one of the most important sources of information for the natural gas and crude traders in the years to come. Irrespective of our opinion regarding the cause of last Thursday’s event in the natural gas market, Nanex is a source of timely and critical market intelligence.

[3] "Policy for Revisions to the Weekly Natural Gas Storage Report,”Comments of the Public Service Commission of the State of New York,

[4] “Nanex is the creator and developer of NxCore, technology that powers the delivery of a streaming whole market data feed from Telvent DTN with an easy to use API. Nanex supports NxCore and develops applications that run on the NxCore platform. […]Nanex currently offers historical market data from January 2004 to the present day.” I have no business connection (or any other connection) to NANEX. See http://www.nanex.net/index.htm for more information.