Today the US is producing more natural gas, natural gas liquids (NGLs) and some grades of crude oil hydrocarbons than we can use.  Consequently we’ve shifted from an overall position of hydrocarbon shortage to one of surplus. But only some of those surplus products can be exported. That’s because of rules put on the books during the decades of shortage that restrict or ban the export of hydrocarbons. At least six such “Molecule Laws” are now variously impacting international market transactions involving US produced hydrocarbons. Today we describe the export rules affecting NGLs.

This blog series is about export rules we call the ‘Molecule Laws’. The “laws” are actually a hodge-podge of rules, policies, regulations, procedures and a few laws administered variously by the Department of Energy (DOE), the Federal Energy Regulatory Commission (FERC), the State Department, and the Department of Commerce. The laws paint a confusing picture regarding export restrictions on different hydrocarbons. They made no difference when there was nothing to export.  But now, with production booming, they’ve become important.  In episode one (see The Molecule Laws) we learned about Molecule Law #1: Methane molecules can be exported based on destination (Canada & Mexico are ok) and in the form of LNG to other countries from approved terminals. In other words, any arrangements made to export natural gas that require liquefied natural gas (LNG) terminals – have to go through an approval process involving the DOE and the FERC. And (for the most part) if you want to ship to countries that actually want LNG then you need additional DOE approval for export to non-free trade association (FTA) countries like Japan and China – although that FTA membership profile could change any time. This time we look at the molecule laws that apply to NGL exports.

The NGL family consists of 5 different purity products that start life mixed up in the natural gas liquids stream known as “Y-grade” that comes out of production wells alongside natural gas. The Y-grade liquids are separated from natural gas at processing plants close to the wellhead and the dry “tailgate” natural gas is distributed to customers by pipeline. The Y-grade liquid mix is shipped to fractionation plants that extract the five purity products - propane, ethane, normal butane, isobutane and natural gasoline. These purity products have a wide variety of different uses but what follows is a quick-and-dirty summary. Propane is used for home heating, in your BBQ grill and as a petrochemical feedstock. Ethane’s only use is as a petrochemical feedstock to make everything from plastic bags to antifreeze. Normal butane is used as a component of motor gasoline, and is the stuff that you see vaporizing out of your gas tank on a hot summer day. Isobutane is used as an aerosol propellant, refinery feedstock and refrigerant. And natural gasoline has a variety of uses including blending into motor gasoline, petrochemical feedstocks and being stirred up with heavy bitumen crude from Canada to make it flow in pipelines. [See earlier RBN blog posts on NGL processing and markets in the series Carbon Rich Value High, Part 1,  Part 2 and Part 3 for a more extensive primer on NGL purity products.]

As a consequence of the shale revolution that has transformed the output of natural gas in the US, NGL production is also booming today – due in no small part to the fact that NGL liquids produced from natural gas have a high “uplift” value compared to dry natural gas i.e. they are worth a lot more than gas. In fact the NGL liquids production boom reflects the fact that after dry natural gas production from shale surged in 2010, prices for gas fell through the floor in 2011-2012 and drillers switched their attention to liquids rich gas plays (as well as oil) in order to increase their returns by harvesting the additional liquids uplift.

When it comes to exports, two of the purity products - propane and butane are the products most traded in international markets, and are collectively called LPG, or liquefied petroleum gasses. Figure 1 below shows Energy Information Administration data for US LPG production from gas processing since 2005 (the data does not include production from oil refineries). As you can see output has increased sharply by 40 percent since 2009. With domestic demand for LPG fairly static (although with a seasonal bias towards the winter) the increased production caused prices for propane at the Gulf Coast to drop from about $1.50/gal to around $0.70/gal during 2012. But then expansions to LPG export facilities in March 2013 (Enterprise Products Partners) and October 2013 (Targa) came online leading to an increase in exports and a subsequent recovery in propane prices. 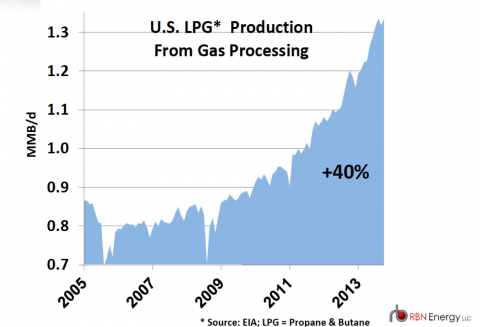 LPG exports are expected to continue to increase over the next five years, getting up to almost 800 Mb/d by 2018 (see Figure 2).  There are 8 more publically announced terminal projects being built or planned to increase Gulf Coast export capacity, possibly as high as 1.4 MMb/d - about equal to the total production of propane in the United States. And that brings us to Molecule Law #2 : Propane and butane molecules can be exported to any non-sanction country, regardless of the needs of the U.S. market. Meaning that there are no real restrictions on LPG exports, which is good news for exporters and for propane prices but could be viewed otherwise by US propane consumers. That’s because just as LPG exports were cranking up to reach a record of over 400 Mb/d in the fourth quarter of 2013, a propane shortage developed in the Midwest caused by an unusually wet corn season leading to higher than usual demand for propane used for crop drying (see Sail Away – Propane Exports Exceed 400 Mb/d). Propane shortages in October and November 2013 were then compounded by a very cold “polar vortex” winter that caused even greater propane shortages at the end of January (see A Perfect Storm). Predictably, propane prices shot up in response to the crisis – to over $4/gal at the Conway, KS trading hub in the Midwest (although they have now returned to more normal levels).

To access the remainder of The Molecule Laws: I Fought the Law and the Law Won – Part 2 Natural Gas Liquids you must be logged as a RBN Backstage Pass™ subscriber.