Everybody Wants to Rule the World - What's Ahead for OPEC-Plus's Crude Supply Management?
Close

The collapse in crude oil prices and COVID-19’s very negative effects on global gasoline, jet fuel and diesel demand are putting an unprecedented squeeze on U.S. refiners. Even before the initial coronavirus outbreak in Wuhan, China, started to grab headlines around New Year’s Day, refineries had already been incentivized to shift their refined products output toward diesel, which can be used to help make IMO 2020-compliant low-sulfur bunker. Now, with the COVID-19 pandemic spreading to Europe and North America and stifling consumer transportation fuel demand, the price signals are even stronger, pushing refineries to do everything they can to minimize their gasoline and jet fuel production and enter what you might call “max diesel mode.” Today, we discuss how there are challenges and limits to what they can do, and a number of refineries may need to shut down due to lower demand, at least temporarily.

Last Monday, March 16, grumblings started among commodity traders regarding negative gasoline cracks — cracks being the price of gasoline minus the price of crude — on the NYMEX. By the end of that day’s session, crack spreads for Reformulated Gasoline Blendstock for Oxygenated Blending (RBOB) — the benchmark for gasoline trading — had fallen almost 90% to settle below $1/bbl (blue line, left graph in Figure 1). Gasoline prices crashed another whopping 30% on Monday, March 23rd.  Ultra-low-sulfur diesel (ULSD) cracks remained strong at $16/bbl (right graph in Figure 1), but the jet fuel crack spread (not shown), which is usually closely tied to diesel, closed at only $8/bbl. Since then, regional crack spreads for gasoline around the U.S. hovered below $5/bbl and then moved into negative territory. 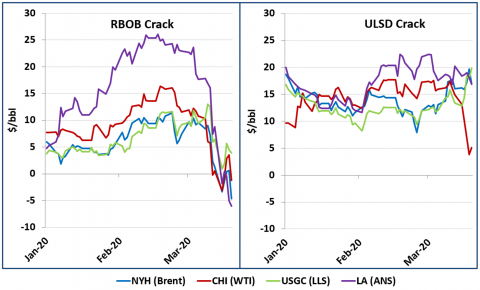 With strong price signals pushing refiners towards diesel production, they would have made immediate adjustments to tweak their refined product yields. However, as we said in our introduction, refiners through the second half of 2019 had already been given strong price signals to produce more diesel heading into the fourth quarter of 2019 and the first quarter of 2020 due to the IMO 2020-related need for low-sulfur bunker. Weekly Energy Information Administration (EIA) data released last Wednesday, March 18, indicated that the current distillate yield (diesel plus jet fuel) at U.S. refineries was around 48%, or three percentage points lower than the 51% peak over the last year. Therefore, the potential to swing from gasoline to distillate is likely limited. The larger swing that could take place would be to blend kerosene used for jet fuel production into diesel — in other words, optimize the two finished transportation fuels within the distillate pool.

To estimate this shift, we ran some simulations utilizing Baker & O’Brien’s PRISM refinery model. Figure 2 lays out a step-change analysis for the entire U.S., toggling different options to reduce jet and gasoline production. This analysis assumes that immediate changes to the crude oil slate are not taken but could be an option for refiners to consider down the road as the ongoing crisis unfolds. 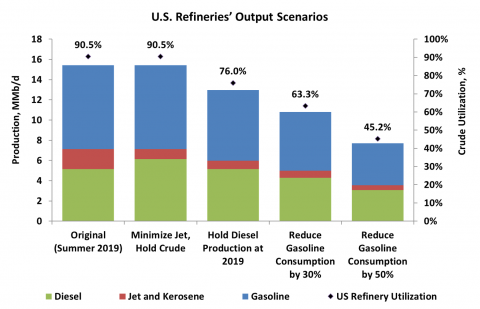 The final column in Figure 2 paints a very dire situation, with aggregated refinery utilization at about 45%. In our experience, crude throughput in the 60% to 70% range is approaching the minimum rates that a refinery can operate without completely shutting down units. The above analysis is focused on the U.S. in aggregate and does not account for the nuances of each refinery (or refining operator) and every region other than the analysis of the quantity of jet that could move to diesel.

In reality, not every refinery can or would ramp down to 45% or 55% under our worst-case scenario. If that situation were to come to fruition, some refineries would have to shut down while others would maintain a higher utilization. So, which refineries are at risk? We assessed this based on two primary factors (though there are many other variables that refiners would have to account for): (1) which refineries produce a higher yield of gasoline and jet fuel versus diesel, and (2) which refineries have access to outlets for their products through either excess storage or export markets.

Starting with the yields, crude slates and refinery configuration are strong influencers on the quantity of gasoline and jet produced. Figure 3 shows our estimated aggregate gasoline and jet yields for the U.S.’s 130-plus refineries by PADD after pushing all the jet possible into the diesel pool. (The width of each refinery’s bar reflects its capacity.) In this chart, the farther to the left a refinery sits, the more gasoline and jet fuel the facility makes in this scenario. The refineries in the left-most quarter of the chart would be the most at risk, since they would require huge — and possibly unfeasible — crude rate reductions to remain in gasoline/jet “containment mode.” In contrast, the refineries in the right half of the chart would appear to be in a much better position, if offtake and/or storage are available for their excess products. 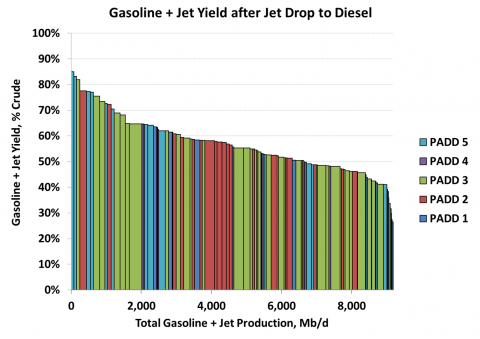 The next issue relates to location — that is, if a facility can’t sell all its gasoline and jet in its immediate region, does it have sufficient access to storage and to ancillary markets for sale to keep supply and demand in relative balance? This nuance puts refineries in PADD 2 (the Midwest) and PADD 4 (the Rockies) at higher risk of reduced utilization rates or shutdowns. The current refined pipeline network in the U.S. is configured to move products from PADD 3 (Gulf Coast) into the Midwest and Rockies, but not the other way around. Therefore, if consumers in PADDs 2 and 4 severely cut back on consumption, refineries in those regions would be left at the mercy of storage capacity before their utilization rates have to be cut. Unfortunately, storage of gasoline in PADD 2 tends to peak in late February of every year, with a maximum inventory of ~63 MMbbl over the last five years. Storage of gasoline components in PADD 2 as of March 18 was ~57 MMbbl (blue bar segment in Figure 4). EIA’s 2019 estimate of total working storage capacity in PADD 2 was ~77 MMbbl, and we assume storage levels can rise to ~90% of the working storage level, or about 69.3 MMbbl (blue plus red bar segments). That would leave less than 20 days of incremental stockpiling capacity if demand were to drop by 30%. The situation is similar in PADD 4. 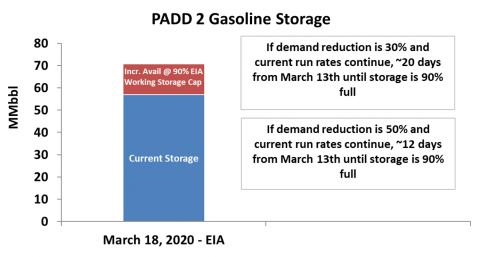 The three other PADDs, which are predominantly near the water and have access to export markets, have more options to place barrels, but reduced run rates and shutdowns would probably come their way as well if the situation becomes bad enough. PADD 5 (the West Coast), for example, has some of the highest gasoline and jet yields in the country — note the number of aqua bars in the left half of the Figure 2 chart — and also happens to be a region that has been hit particularly hard by COVID-19. With the entire state of California essentially in lock-down mode, refineries there will likely see widespread utilization reductions over the coming weeks. Similarly, there are a number of stay-at-home mandates in place in PADD 1 (the East Coast), another hard-hit region. That leaves PADD 3 — again, the Gulf Coast, and the location of about half of total U.S. refining capacity. If shipments on the Colonial and Plantation refined pipelines from the PADD 3 to PADD 1 drop due to dwindling East Coast demand, can those excess barrels be placed on the water? In our opinion, probably not all of them.

This is an extreme situation facing the globe and the near-term impacts may well be dire, but it’s one that will eventually end — the question is when. While some refining assets may have to throttle back utilization for a period of time and some may even shut down temporarily, we are hopeful that over time, things will return to normal for refiners, and everyone. But it’s a situation that we will continue to monitor. Join us at our upcoming School of Energy Virtual conference, during which Amy Kalt will discuss the impacts of these and other recent market events on the crude oil and refined products sectors.

"Strange Brew" was written by Eric Clapton, Felix Pappalardi and Gail Collins. The song appears as the lead track on side one of Cream's second studio album, Disraeli Gears. It was originally recorded at Atlantic Studios in New York in April 1967 as "Lawdy Mama," but Cream producer Felix Pappalardi and his wife Gail Collins re-wrote the lyrics and the melody, transforming the song into "Strange Brew." It was the first Cream single to feature Eric Clapton's lead vocals, rather than Jack Bruce's. The song was released as a single in June 1967, and went to #5 on the Billboard Hot 100 Singles chart. Personnel on the record were: Eric Clapton (lead vocal, lead guitar, rhythm guitar), Jack Bruce (bass, backing vocal) and Ginger Baker (drums).

Disraeli Gears was produced by Felix Pappalardi and released in November 1967. It went to #4 on the Billboard Top 200 Albums chart. The album was recorded in three and a half days, and featured the psychedelic album art of Clapton's neighbor, Martin Sharp, who would also co-author "Tales of Brave Ulysses" with Clapton for the album. "Strange Brew" and "Sunshine of Your Love" were released as singles from Disraeli Gears. The album's title came from Cream roadie Mick Turner, who, when talking to Clapton about a racing bicycle Clapton was purchasing, mispronounced "Derailleur gears" as "Disraeli gears." (Disraeli was a well-known British prime minister in the late 19th century.) It cracked the band up, and they all agreed it had to be the album's title. Disraeli Gears has been certified Platinum by the Recording Industry Association of America.

Cream was a British rock band formed in London in 1966 by Eric Clapton, Ginger Baker and Jack Bruce. They released four studio albums, four live albums, 10 compilation albums and 10 singles. The band was active from July 1966 to their breakup in November 1968. They reunited for their induction into the Rock and Roll Hall of Fame in 1993, and for a series of seven shows in 2005. They have sold more than 15 million records worldwide. The band also has a Grammy Lifetime Achievement Award. Jack Bruce died in October 2014, and Ginger Baker in October 2019. Cream producer and co-founding member of the band Mountain, Felix Pappalardi, was shot and killed by his wife Gail Collins in 1983. Eric Clapton continues to record.