Where It's At - More Gulf Coast LNG Export Capacity Is on Its Way. Where Will the Feedgas Come From?
Get our Daily Blog Email

Demand for imports of condensate to use as a diluent for blending with heavy Canadian bitumen crude is expected to increase from 200 Mb/d in 2013 to over 500 Mb/d by 2020 according to the Canadian Energy Research Institute. This is a very big deal.  Last week we described the route that Plains All American developed to ship condensate from the Eagle Ford to Western Canada. Today we describe similar plans being developed by Kinder Morgan.

The last episode of our Gulf Coast crude oil terminals series covered the Plains All American St. James, LA terminal (see Plains Trains and Diluent Deals). In particular we described the way that Plains is using St. James as a staging post to send condensate from the South Texas Eagle Ford basin as diluent to Western Canada via the Capline pipeline to Chicago and the Enbridge Southern Lights system to Edmonton. Having covered Plains’ condensate plans we felt it appropriate to update you with details of a similar project planned by Kinder Morgan (KM) in this blog. In the next and final episode in this series we will round out the Gulf Coast crude terminals with a look at yet-to-be-built projects and a summary of what we covered so far.

KM is the largest midstream company in the U.S. They own significant natural gas and liquid pipeline assets. KM has a large refined product terminal business (much of it purchased in 2000 from GATX). KM does not have a large crude oil terminal business  - unlike other companies highlighted in our Gulf Coast terminal series - but they are increasingly involved in crude oil and condensate transportation. KM has crude oil pipelines in Canada  - we recently covered their plans to expand the Trans Mountain pipeline to the West Coast of Canada (see West Coast Pipe Dreams). The company has also discussed a “Freedom Pipeline” project that would repurpose a natural gas pipeline from El Paso, TX to California to supply Permian Basin crude to the West Coast. (That one has not left the gossip columns and hit the drawing board yet).

The “diluent trade” is a growing business for US Gulf Coast producers and refiners. The business consists of sourcing condensates in the Gulf Coast region and shipping them to Western Canada by pipeline. In Canada the condensate is mixed with heavy tar sands “bitumen” to make a “dilbit” crude light enough to flow back to the US (or Eastern Canada) in a pipeline (see It’s a Bitumen Oil – Does it go Too Far?). Canadian demand for condensate as diluent is expected to grow rapidly in the coming years. The chart below is based on Canadian Energy Research Institute (CERI) estimates published in 2011 for condensate/diluent demand in Canada. Total Canadian demand (blue line) is forecast to expand from 300 Mb/d in 2012 to 670 Mb/d by 2020 . At the same time, Canadian condensate production (red shaded area) is only about 150 Mb/d leaving a growing requirement for imports (green line). 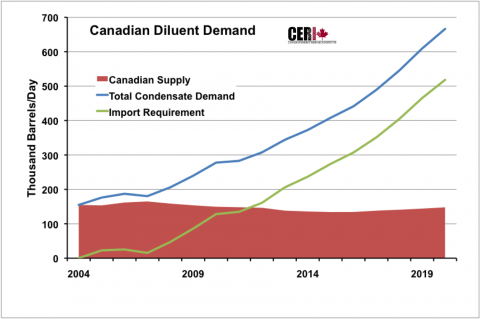 As we have discussed many times condensate is a tricky substance to define because it can be produced from a natural gas processing plant and as a very light crude from the wellhead (see blogs from our Fifty Shades series  - Parts I, II, III and IV for more on condensate properties and markets).  As we learned in our condensates series, an emerging major source of condensate supply for Western Canada is the South Texas Eagle Ford basin. Just as we saw with Plains (see Plains Trains and Diluent Deals) KM has leveraged its assets in the US and Canada to link together condensate production in the Eagle Ford with pipeline transportation to Western Canada.

The first part of the KM condensate cycle involves the gathering and shipment of crude and condensate in the Eagle Ford. As we explained when we covered Eagle Ford infrastructure developments last year Kinder acquired a condensate gathering system from Petrohawk in 2011 (see Knocking on Heaven’s Door Part III). During 2012 KM completed a crude/condensate pipeline delivering up to 300 Mb/d from the eastern Eagle Ford to refineries, petrochemical plants and docks in the Houston area. Recall here that Plains is moving its crude and condensate from the Eagle Ford south to Corpus Christi for shipment along the Gulf Coast by barge or tanker. KM’s gathering system in the Eagle Ford is further east – making the pipeline link to Houston easier. The pipeline is a combination of new construction (70 miles) and converted natural gas pipeline (113 miles) originating in the Blackhawk field at Cuero in DeWitt County and terminating at the Houston Oiltanking Terminal (see Crude Accommodation at the Oiltank Inn). The map below shows the route of the KM crude and condensate pipeline as it comes into Houston with two laterals into the Oiltanking Terminal (green line) and the KM Pasadena Terminal (pink line). The Pasadena Terminal is linked to the KM Galena Park terminal (red line). 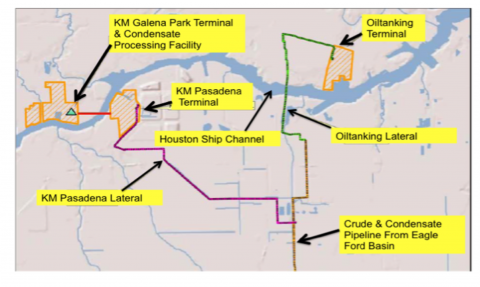 In Houston, KM is building a $200 million condensate processing facility at its Galena Park terminal on the Houston Ship Channel. The condensate processor is supported by a 50 Mb/d contract with BP and can be expanded to process 100 Mb/d. BP has also contracted to lease 750 MBbl of product storage at Galena Park. The condensate processing facility is expected online in 1Q 2014 and will produce light and heavy naphtha as well as kerosene and gasoil. These refined products could be consumed domestically or exported. KM recently announced (January 2013) an additional investment of $170 M to expand Galena Park to include the construction of a new ship dock to handle ocean going vessels and an additional 1.2 million barrels of liquids storage tanks.

In addition to processing condensate in Houston at Galena Park, KM will facilitate customer shipments to Western Canada via the Explorer pipeline from Houston to the Midwest and the KM Cochin pipeline that runs from the Midwest to Alberta.  The first leg of that journey is on the Explorer pipeline that connects to KM’s Houston Pasadena terminal.  The 1,900-mile Explorer pipeline originates in Lake Charles, LA then runs west to Port Arthur and into Houston before turning north to run through the Midwest to Hammond, IL south of Chicago. The pipeline is connected directly to Lone Star’s Mt. Belvieu NGL storage facility and also has connections to all but two Houston area refineries. Explorer is a 675 Mb/d liquids pipeline owned by a consortium of oil companies and is primarily used for refined products and NGLs including condensate/diluent.

KM will build a new terminal linking Explorer to their Cochin pipeline at Kankakee, IL as part of a project to reverse one leg of the Cochin products pipeline to move diluent from the Midwest to Canada. As well as moving condensate originating from KM’s crude and condensate pipeline in the Eagle Ford, the Explorer pipeline can ship condensate (most likely in the form of natural gasoline, a.k.a., plant condensate) from Mt. Belvieu – the center of the natural gas liquids universe – to Canada (see Can Mt. Belvieu Handle the NGL Supply Surge for more on Mt. Belvieu). Explorer also held an open season in March and April 2012 for a “diluent extension” from Peotone, IL to Manhattan, IL to be in service 1Q 2014 that would link with the Enbridge Southern Lights pipeline – offering shippers an alternative to Cochin for the final leg of the trip to Western Canada.

The KM Cochin pipeline is a 1,900-mile pipeline that flows propane from Alberta, Canada, across the border, through a number of Midwest states and back into Canada to terminate in Sarnia, Ontario. KM became the full owner and operator of Cochin in 2007.  Exports of propane from Canada have dropped over the past decade but as we have seen there is increasing demand for condensate. KM is therefore proposing to reverse and expand part of the line so that it can carry 95 Mb/d of condensate westward from Kankakee, IL to Fort Saskatchewan, Alberta (see map below). KM will build a new receipt terminal at Kankakee that will have up to 2 MMBbl of storage. 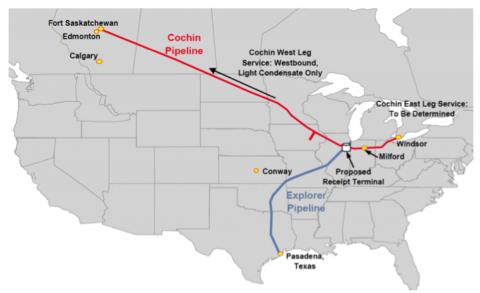 During an open season in April and May of 2012, KM received 100 Mb/d of binding commitments. The FERC approved KM’s project plans in October 2012 and the company now awaits approval from Canada’s NEB that is expected by July 2013. If approved the pipeline will commence service in July 2014. KM is also discussing with customers the possibility of extending Cochin further west into western Canada and an Eastern extension that would link to Marcellus NGL production.

These are still early days for the developing condensate business in the Gulf Coast region. Between them Plains and KM are developing the potential to deliver at least 170 Mb/d of Eagle Ford condensate as diluent to the Canadian tar sand fields in Alberta by the middle of 2014. That will be almost enough to plug the gap in Canadian demand by then (NEB estimates 2014 import demand at 184 Mb/d). KM is also positioning its Galena Park terminal in Houston as a center for condensate processing and refined product exports. We have a sense that before too long there will be many more condensate infrastructure projects showing up like “magic” in midstream company presentations.

A Kind of Magic was released by Queen in 1986

Which Kinder Morgan Analyst Presentation was this out of?

Great post. Do you know the plans for recycling the diluent from the refineries after the dilbit crude from Canada has been processed in the USGC? Presumably the refiners will not have a use for it in the gasoline pool and chemical feedstock market is full up.

The answer to the recycling question for diluent is unclear at present - although it could simply be "round tripped" back to Canada again. A lot will depend on how refineries process the dilbit crudes.