This month the North Dakota Industrial Commission (NDIC) indicated they are leaning towards leniency in their treatment of operators that have drilled but not completed wells within the one-year time frame permitted. Instead of assuming such wells are abandoned, which would otherwise mean an expired drilling permit and about $200,000 in plugging costs,  – the State plans to give operators more time. That possibility opens up a whole new underground storage option for producers struggling to make ends meet. Today we explain the NDIC plan.

There has been a significant increase in State tax revenues from the oil and gas sector over the past 4 years as drilling and production from the prolific Williston Basin boomed in North Dakota. Little wonder that the State’s NDIC has done its best to keep producers actively engaged in drilling even as crude prices have fallen during the past year. To that end as we detailed back in April (2015) the State legislature has provided tax incentives to producers drilling during periods of time when prices fall below certain thresholds (see I Cannot Compete With Your Tax Scheme). There were two such tax breaks on the table this year – with the so called “small trigger” incentive providing a 4.5% break on the State’s 6.5% Extraction Tax (applied to the gross value of oil produced at the well) between February and June 2015 for all new horizontal wells when average oil prices dropped below $57.50/Bbl in January 2015. The second, “large trigger” tax break would have waived the Extraction Tax altogether for 24 months for all producers provided prices stayed below a $55/Bbl threshold for 5 consecutive months. When we last wrote on those tax breaks producers were confidently expecting to enjoy a waiver of extraction taxes after June 2015 on the assumption that the 5 month low price criteria was met. Unfortunately for them - as shown in Figure #1 below - the trigger was never pulled because average prices for the West Texas Intermediate (WTI) benchmark crude target (red line) were higher than the threshold in May and then again in June (orange dashed circle). As a result the Large Trigger was not enacted and producers did not enjoy the tax break. 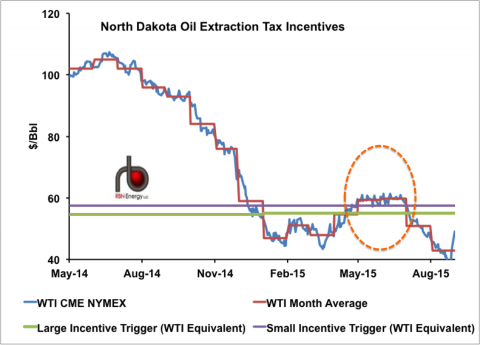 Since June (2015) the NDIC has indicated concern during their monthly press conferences with the increasing number of North Dakota wells that have been drilled and are yet to be completed. (Completion means when the first oil is produced through wellhead equipment into tanks.) North Dakota drilling permits expire one year after they are issued – meaning that producers lose their permit if they do not drill and complete a well within a year after obtaining the permit. Such provisions are common in the industry and similar provisions are also often included in the operator’s Mineral Rights Lease with the Royalty Owner (see Held On Tight By Production). Obviously both the Royalty Owner and the tax authority are incentivized to get production underway as quickly as possible to get revenues.

To access the remainder of Incomplete? North Dakota Has A Plan To Keep Oil Wells Unplugged you must be logged as a RBN Backstage Pass™ subscriber.