NGL production in the Marcellus is growing by leaps and bounds.  There is only one play projected to grow faster – Utica.  And Utica sits just a few thousand feet below the Marcellus.  Combined NGL production from the two plays is projected to range between 450 – 600 Mb/d depending on who’s forecast you like best.  But as fast as these volumes are coming on, natural gas processing capacity and fractionation capacity are being expanded even faster.  Are the midstreamers getting ahead of the producers with 22 gas plant projects and 11 new fractionators or expansions in the works?  Or do these midstreamers know something that is not baked into the various industry production forecasts? Let’s see what the most recent projections are telling us.

We’ve looked at this subject once before.   Back in mid-July I spoke at the Infocast Marcellus & Utica Infrastructure Summit in Pittsburgh and summarized the presentation in a post titled Too Much Marcellus/Utica NGL Pipeline Capacity?  Or not enough?   In that review we examined the outlook for NGL production and the implications for new ethane pipelines out of the region.  At the time we were a little suspicious that our NGL production forecast for Marcellus might be on the low side due to the ethane capacity being built out of the region.  Now in October 2012 it is clear that either: (a) northeast NGL production will be at the high end of industry forecasts, or (b) processing and fractionation infrastructure is being completed well in advance of the need for the new capacity.

Anytime this industry starts to talk about astronomical rates of production growth, there is always some skepticism.  So let’s get one issue out of the way up front.  The growth rate for natural gas production in the Marcellus IS astronomical. 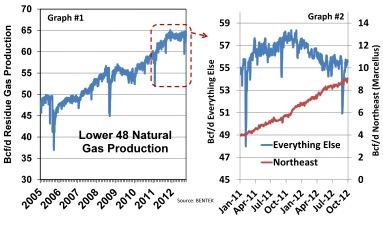 Let’s put that growth rate in perspective.  Graph #1 above is lower 48 natural gas production since 2005, based on Bentek flow data numbers.  Total production grew rapidly while prices were high until early 2009 and then declined slightly after the financial crash took the wind out of natural gas prices.  During 2009 there was a lot of shale drilling going on in anticipation of the processing plants and gathering systems being built  to get that gas to market.  That infrastructure started to be completed in 2010 and natural gas production took off, increasing by more than 10 Bcf/d from early 2010 until October 2011.

To access the remainder of Field of Dreams or Production Planning? Building Out Northeast NGL Infrastructure you must be logged as a RBN Backstage Pass™ subscriber.