Baby, I Got It - Could the U.S. Alone Meet Biden’s Call for 15 Bcm More LNG to the EU?
Get our Daily Blog Email

Crude prices have fallen worldwide by about 20 percent since June 2014, as increasing supplies have not balanced with lackluster demand worldwide. Here in the U.S. prices for the benchmark West Texas Intermediate (WTI) grade have strengthened against international benchmark Brent as refiners continue to operate at high capacity. However, recent signs of discord in producer’s organization OPEC suggest they cannot agree to curb output – keeping downward pressure on overall prices. Today we wonder if there is a bottom to the current price slide. 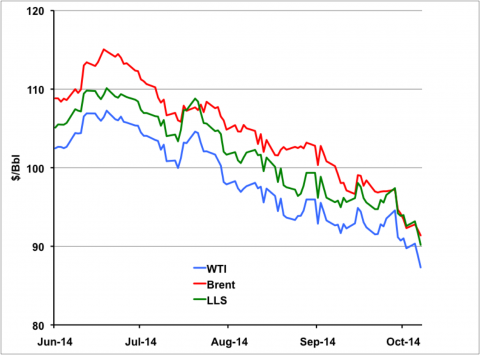 The root cause for the fall in oil prices is a worldwide increase in crude supplies coupled with a downturn in demand. Let’s look at the supply side first. While U.S. shale based production has been increasing at the rate of 1 MMb/d a year for the past three years that output boost has been offset until recently by disruptions in supplies from other producers in West Africa (notably Libya) and the Middle East (Iran, Syria). So although new U.S. production pushed out imports into the world market, the impact on prices was muted because the extra supplies simply replaced output curtailed by war zone disruptions. Now those supply disruptions are coming to a close as Libya has increased production significantly and Iran begins to export crude, as sanctions have been partially lifted. On the demand side, economic recovery from the financial crisis continues to splutter in most of the world and demand for oil is down or the same as it was a year ago. Petroleum Argus reports that oil demand in Europe’s 5 largest economies was almost 5 percent lower in Q2 2014 than the same period in 2013 and crude runs in China Japan, S Korea and India are no higher than a year ago. Even in the U.S. where the economy is performing better, oil deliveries rose by just 0.5 percent in the year to September.

To access the remainder of Crude Falls To Pieces – How Far Will it Tumble? you must be logged as a RBN Backstage Pass™ subscriber.