Are We There Yet? - What $40/bbl Means to Crude Oil Markets

In the five weeks since February 11, the price of WTI crude oil on the CME/NYMEX spiked 50%, up from $26/bbl to $40/bbl (see black dashed circle in Figure #1).  For hedge funds that took long positions in February, it was an awesome trade.  And for beleaguered producers, it was certainly a bit of good news.  But there are no celebrations in the streets of Houston and Oklahoma City.  The fact that $40/bbl should be considered “good news” is sobering: Eighteen months ago, that price level would have been seen as a catastrophe for the producing community.  In fact, it still is. In today’s blog we examine the factors that help push prices above $40/bbl and what it will take to really get US production growing again.

Yes, $40/bbl crude oil will help the balance sheets of most oil and gas producers. A handful of rigs might be put back to work.  But let’s put things in perspective.  Since October 2014, the price of crude is down 60%, over 1,200 rigs drilling for crude (75%) have been idled (see Figure #1), and thousands of oil industry workers are looking for jobs. Producer CAPEX budgets have been slashed, and the reality is that a price of $40/bbl will do little to change the meager investment plans that most producers laid out in their Q1 earnings calls.  At $40/bbl, producer returns for drilling most shale wells are under water.  Consequently, new drilling has slowed to a crawl.  A few companies have declared bankruptcy, and more are on the way. 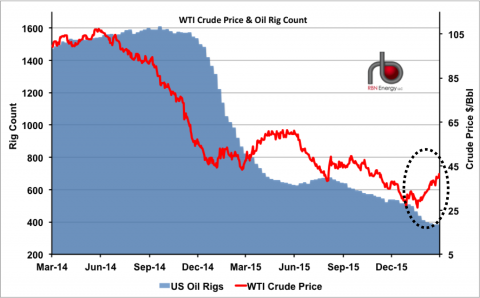 To access the remainder of Are We There Yet? - What $40/bbl Means to Crude Oil Markets you must be logged as a RBN Backstage Pass™ subscriber.