During the first 7 months of 2015 the U.S. experienced record setting refinery crude processing and utilization rates. By the end of July crude inputs topped 17 MMb/d for the first time and nationwide refineries ran at over 96% of operable capacity - reaping the rewards of robust margins. But the party has been marred by a number of unexpected outages – the latest of which brought down a 250 Mb/d unit at BP’s Whiting, IN refinery last weekend – causing a spike in Chicago gasoline prices. Today we ponder why outages may be occurring and the upcoming impact of overdue fall maintenance.

An unexpected outage on Saturday (August 8, 2015) affected the largest Midwest refinery – the 413 Mb/d BP Whiting, IN plant. Press reports indicate that leaking tubes on a 250 Mb/d crude distillation tower caused BP to shut the unit – that is not expected to restart for at least a month. The refinery crude unit impacted by the outage is relatively new - apparently part of the multi year upgrading project completed in 2013 to allow Whiting to run heavy Canadian crude. The outage created immediate concerns about a shortage of refined products in the Chicago area – particularly gasoline – that has been in record demand during this summer’s driving season as U.S. drivers have guzzled cheaper supplies (see King of the Road Again). In response to the outage Chicago gasoline futures prices jumped 17% or 27 cnts/gal from 159 cnts/Gal on Friday August 7, 2015 to 186 cnts/Gal on Wednesday August 12 (see orange dashed oval in Figure #1). Spot prices for Chicago gasoline are reported to have jumped as much as $1/Gal. In addition to a potential shortage of gasoline, the outage leaves BP traders struggling to deal with 250 Mb/d of crude feedstock that is now surplus to their requirements. And because the outage reduces demand for Canadian heavy supplies – buyers in Hardisty, Alberta discounted the price of benchmark Western Canadian Select (WCS) to U.S. benchmark West Texas Intermediate (WTI) at Cushing, OK by nearly $20/Bbl. That left WCS selling at just $23.33/Bbl on August 11, 2015 – it’s lowest level for years – adding insult to injury for Canadian producers already suffering discounted prices because of crude transport congestion (see Keep on Pushing). 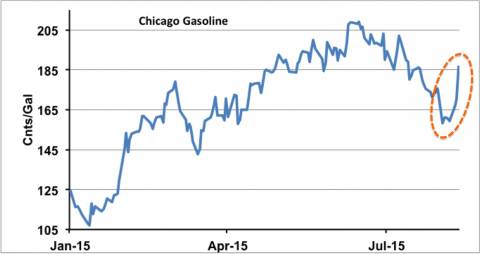 The BP Whiting refinery outage is not the only one affecting the U.S. market this summer. A refinery outage after an explosion at the 155 Mb/d ExxonMobil Torrance, CA refinery back in February has left the Golden State short of gasoline all year and elevated retail prices. And there have been other, smaller outages at refinery units on the East Coast (Reuters reported Philadelphia Energy Solutions had to shut down an 85 Mb/d catalytic cracking unit at their Philadelphia refinery that makes gasoline, this week) and on the Gulf Coast a 38 Mb/d jet/diesel unit at the Shell Deer Park refinery remains shut since the end of July 2015. These are just examples of the kind of outages that are not uncommon at refineries – that are sophisticated multi-billion dollar processing plants with a large number of moving parts (see Complex Refining 101 Part I and Part II).

To access the remainder of Achy Breaky Refineries? – Record Pace of Crude Refining Leads to Higher Fall Maintenance you must be logged as a RBN Backstage Pass™ subscriber.