Net crude oil imports to the U.S. Gulf Coast in 2016 have been running well above the pace set last year, the increase driven by a combination of lower U.S. crude oil production, rising import levels and relatively flat export volumes. The trend toward higher net imports –– an outgrowth of the end of the ban on U.S. crude exports –– is significant in that it affects oil inventories and oil prices. What’s driving this trend, and how soon might net imports peak? Today, we survey recent developments on the crude oil import/export front, with a focus on the Gulf Coast.

Crude oil traders and the audience at the U.S. Open in Flushing Meadows, NY had one thing in common recently: their heads have been whirling, side to side and up and down. In the case of crude oil traders this was due to a sharp drop in imports in the week ending September 2, followed by a sharp rise the following week. The rollercoaster was caused primarily by the coincidence of three factors: a hurricane preventing discharges at Chevron's Pascagoula, MS refinery and disrupting offloading at the Louisiana Offshore Oil Port; the Labor Day holiday slowing operations elsewhere; and the decision by importers in Texas to reduce their intake of imported barrels ahead of the ad valorem tax assessment on September 1. Soon after tax day, the crude came flooding back in (see Figure 1). 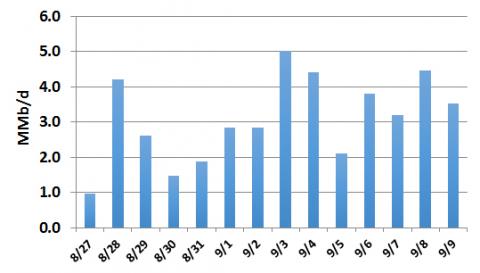 Beyond the short-term whiplash caused by these transient factors, there is a real concern among traders about the level of imports, and what they mean for the health of the market. In many ways it’s not surprising that import volumes are up. After all, U.S. oil production is way down –– from a peak of more than 9.6 MMb/d in April 2015 to less than 8.5 MMb/d as of September 2, according to the Energy Information Administration (EIA) –– so U.S. refineries have turned to overseas suppliers to help fill the gap. Also, lifting the U.S. ban on crude oil exports in December 2015 released domestic crude oil from its confinement to a limited market. And it put domestic and import barrels on an even footing in the U.S. market; before the ban ended, domestic barrels often were cheaper because they had nowhere else to go. With U.S. crude now able to be shipped overseas, more oil could flow out, and more oil needed to be imported to make up the difference.

To access the remainder of Tangled Up In Crude - Net Oil Imports to the U.S. Remain Persistently High you must be logged as a RBN Backstage Pass™ subscriber.