Last week (February 2013) EOG Resources told analysts that most Eagle Ford oil production should be classified as condensate rather than crude oil. They backed up their assertion with a chart of production quantity and API quality indicating 70 percent of production is condensate. Current forecasts indicate that translates to condensate production of over 500Mb/d in South Texas during 2013. Today we examine the evidence that EOG presented.

As we have discussed previously in RBN Energy blogs, condensate is lighter than crude oil. Whereas a conventional light sweet US crude like the US Midwest pricing benchmark West Texas Intermediate (WTI) crude has an API gravity of 39 and heavy crudes like Mexican Maya have an API gravity of 20, condensates have an API gravity between 45 and 70. [API gravity is a measure of density relative to water where liquids that sink in water have an API of 10 or lower and liquids that float on water have an API greater than 10]. The generally accepted delineation between condensate and crude oil is 45 API. However, the lack of an agreed standard definition for Condensate is a challenge for the industry (see “Neither Fish Nor Fowl” and “Fifty Shades of Condensate – Which One Did You Mean?”).

Growing US domestic crude oil production - up by about 0.9 Mb/d during 2012 is mostly being produced by horizontal drilling and hydraulic fracturing techniques applied in shale deposits. The shale crude output is lighter in quality than most of the crude recovered using conventional drilling methods. In fact an increasing part of the shale crude oil output can be classified as condensate. The Energy Information Administration (EIA) estimates about 11 percent of US crude production in 2010 was condensate. That percentage could  increase in 2013 to about 14 percent of production or close to 1 MMb/d.

By all accounts the crude oil basin producing the most condensate is the Eagle Ford. However data telling us the proportion of crude oil to condensate in the Eagle Ford is deceiving at best and downright confusing at worst. A new analysis made available this past week by one of the largest producer in the Eagle Ford – EOG Resources - throws a curve ball into the ongoing debate about how much condensate is being produced in Eagle Ford. The “official” score keepers of the Eagle Ford production data are the Texas Rail Road Commission (RRC). The latest RRC statistics tell us that January to November 2012 Eagle Ford production averaged 340 Mb/d of crude and 72 Mb/d of condensate or 17.5 percent condensate. Most observers including the RBN team believe that these numbers do not reflect reality.  They are far too low.

For one thing, the statistics  averages for the year to November 2012 and they are based on data known to lag actual production for months because of late reporting. It is also the case that the RRC data is based on the honor system – and lets just say that could lead to some producers being “economical with the truth” about their condensate. That is because crude marketers who buy at the wellhead discount condensate. The posted price for 60 API Eagle Ford condensate averaged $17.5/Bbl below 40 API crude during 2012 (Source Plains postings  - see Knocking on Heaven’s Door Part I for a full explanation of the posted price discount mechanism). As a result, producers are nervous about telling investors that their output is condensate because that makes it less valuable than crude oil.  Up until now we had heard estimates that Eagle Ford production might actually be as much as 40 to 50 percent condensate.  Finally, a lot of Eagle Ford condensate seems to ‘disappear’ – blended off into the crude oil stream.  To the extent that happens it would show up on the RRC statistics as crude oil, not condensate. For all these reasons we have discounted the RRC numbers.  But if we can’t rely on the State of Texas, who can we rely on?

How about EOG?  Last week one of the largest producers in the Eagle Ford, EOG Resources, presented a chart at their quarterly earnings conference call implying that 7 out of 10 production companies surveyed were actually producing 100 percent condensate in the Eagle Ford –i.e. no crude oil. The data EOG presented (originating from a survey carried out by IHS) said that for these 10 producers condensate represents 70 percent of their total crude and condensate production. We reproduce the chart below. 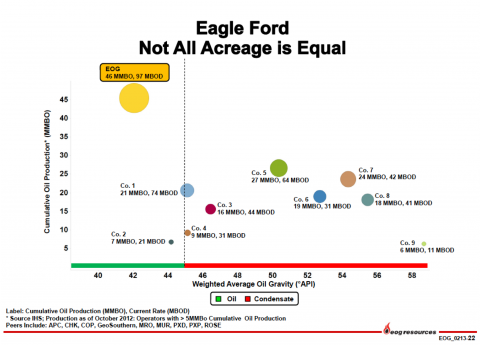 The chart shows cumulative oil production on the right axis and the API gravity of the production along the bottom scale. The black dotted line on the chart is at the 45 API point that generally  distinguishes crude oil from condensate. To the left of the dotted line the production is crude (red baseline) and to the right it is condensate (green baseline). The data on the chart is plotted as a series of colored dots representing EOG (large yellow dot) and 9 competitor Eagle Ford producers (Co.1 to Co. 9). The height of the colored dots indicates the cumulative Eagle Ford production volume measured on the left axis – also written beside the dot. The horizontal position of the dot is the average gravity of that company’s crude and condensate production. Basically the chart is saying that every company except EOG and two competitors has produced all their crude and condensate from the Eagle Ford as condensate.

The data is easier to interpret in a table form. Below we list the unidentified companies and their current daily Eagle Ford production as of October 2012 from the chart. If the company is to the left of the dotted line we counted the daily production as crude and it if was to the right we counted it as condensate. Our method is not 100 percent accurate since the API level indicated on the chart is based on total cumulative production, not current production. However for our purpose we will assume that current production reflects the historical average API level – that is if they have been producing condensate all along then they will continue to do so. What the table shows is that including EOG these companies were producing between them 456 Mb/d in October 2012 and that 7 out of the 10 companies were producing condensate – a total of 319 Mb/d or 70 percent of output – leaving only 30 percent of output or 137 Mb/d as crude oil. 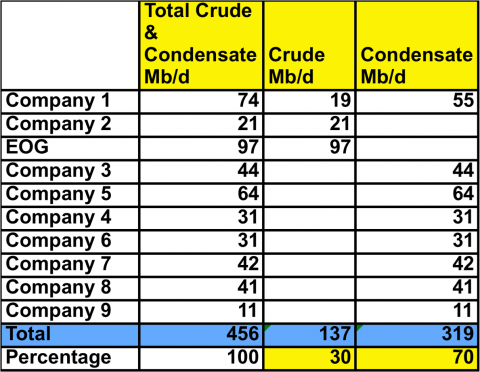 The companies used in the IHS survey are not named (except for EOG)  but the October 2012 current production volume estimates on the chart (456 Mb/d) exceed the “official” RRC production numbers for YTD November 2012 – so the companies do represent a significant chunk of Eagle Ford production.

In effect EOG was telling investors listening in last week on the earnings call that most producers in the Eagle Ford with the exception of EOG and two other companies are just producing condensate with no crude oil.

If the data from IHS that EOG presented is accurate then the percentage of Eagle Ford crude that is condensate is much higher than previously assumed by the market. That means there will be a lot more condensate showing up in Houston and Corpus Christi from the Eagle Ford than expected. Even if we assume that there was some attempt to make EOG look better with these numbers by averaging cumulative production rather than just looking at current output it would still be the case that the API gravity of Eagle Ford production is increasing more than most everyone thought.

What are the implications? First – as EOG implied on its earnings call – the returns for Eagle Ford condensate producers are likely to be lower than they would be if more of their production was crude. Second all the production from the Eagle Ford that makes its way to Gulf Coast refineries will be very light and will challenge refineries equipped to handle heavier crudes or even “conventional” light sweet crudes (for more on this issue see Turner Mason and the Goblet of Light and Heavy). In response to the light crude challenge refiners are already making new investments. In January 2013, Valero announced a refinery upgrade due online in 2015 at their 160 Mb/d Houston refinery to allow it to run additional light Eagle Ford crude. The refinery already runs light sweet crude but Valero is investing in a 90 Mb/d crude topper unit to separate out crude components that are too light before they enter the crude unit. Flint Hills is making a similar investment at their Corpus Christi refinery.

Under the circumstances the best market for US condensate today appears to be exporting it to Canada as diluent for heavy Canadian bitumen crude (see Plains Trains and Diluent Deals and It’s a Kinder Magic ). That market is expanding with increased bitumen production but transporting enough condensate to meet Canadian demand requires new pipeline capacity – some of which is being built and some is of which is still waiting for permitting. We will look more closely at the Canadian diluent supply situation in an upcoming blog.

Meantime as 2013 unfolds we will see more Eagle Ford crude/condensate arriving at the doorsteps of Gulf Coast refiners (and increasingly East Coast refiners by tanker). To start with – and this is already happening – refiners will blend the light crude with heavier crude to make it palatable for their refineries (see Heaven Sent Blend). Other companies like BP have committed to using the Kinder Morgan Galena Park condensate splitter (due online in 2014) to process condensate into distillate and naphtha fractions – probably for export. That tactic neatly sidesteps federal regulations prohibiting the export of wellhead condensate (see “Fifty Shades Lighter”).

If the IHS study that EOG presented last week is accurate then the volume of condensate on its way to the Gulf will overwhelm existing refining capacity sooner rather than later. Production forecasts by the end of 2013 from the Eagle Ford range from 850 Mb/d from RBC to over 1 MMb/d from Bentek. In either case even 60 percent of that volume as condensate would see 400 – 500 Mb/d of condensate hitting the market. In the event - excess condensate will have to find its way to Canada – using rail if  pipeline capacity is not available.

So is all this fuss about crude or condensate based on the API gravity worth worrying about?  If the IHS data that EOG presented is to be believed then at least some companies are being “economical with the truth” about how much condensate they are producing. If that is the case then clearly it is more than just a storm in a teacup. The significant overhaul of US crude oil infrastructure that is underway as new Canadian and domestic production makes its way to the Gulf Coast is complex and expensive enough. We are pretty sure that refiners and shippers would prefer to have a better understanding of how much crude or condensate is coming their way than the current guessing games suggest is the case.