Canadian National Energy Board (NEB) data released earlier this month shows that the flow of natural gas imports across the US border at Niagara reversed to become exports for the first time in 2012. In the “old world” before Marcellus in 2008 - Canadian gas flowed into the US at an average 0.9 Bcf/d at Niagara. Last year those imports ground to a halt from May to October 2012 before reversing to 0.3 Bcf/d of exports to Canada in November. The reversal confirms that expanding Marcellus supplies are not just pushing Canadian imports back over the border but also starting to penetrate the Canadian market. Today we look at the dynamics of the Northeast gas flow reversal.

We introduced the possibility of natural gas flow reversals out of the Northeast six months ago in The Marcellus Changes Everything blog series. In Part IV of that series we talked about surplus Northeast production and where it might be headed in the future. That surplus production is coming from the Marcellus and increasingly the Utica shale gas basins in Pennsylvania, West Virginia and Ohio. Marcellus production has increased from 3.9 Bcf/d on Jan. 1, 2011 to about 9.8 Bcf/d today. The most recent Bentek Cellcast projection shows Marcellus and Utica production growing to more than 17 Bcf/d by 2017. These increases will likely exceed Northeast natural gas demand in 2016, causing a dramatic reversal of flow for traditional supplies to the region that today come from the US Gulf, the Midwest and Canada.

The first flow reversal that we expected to see for Northeast supply is imports from Canada. By 2014, Canadian imports into the Northeast will likely drop to zero, then flip to net U.S. exports. The chart below shows Canadian natural gas exports and imports to and from the Northeast since January 2008. Those exports have fallen from about 3Bcf/d in 2008 to around 1Bcf/d since the start of 2011. Significant Canadian imports from the US start to show up on the chart at the end of 2012 (more about those later on). The overall fall in exports is largely due to the replacement of Canadian imports into the Northeast with local supplies - except for some cargoes of imported liquefied natural gas (LNG) that we talked about in our recent blog about Algonquin natural gas supplies (see The Mighty Algonquin). 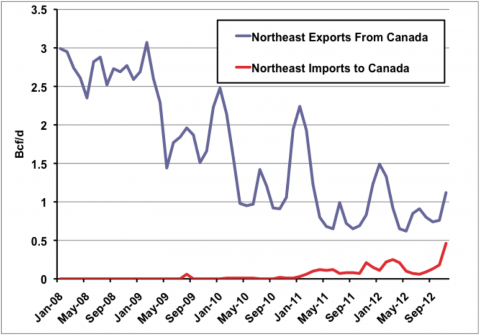 Most of the Canadian gas that is still flowing into the Northeast originates in Western Canada and is delivered to Eastern Canada on the TransCanada Pipeline (TCPL) system. The map below shows the major pipeline systems on both sides of the Canadian border in the Northeast. The TCPL system (blue lines) delivers gas to the US border at Niagara as well to the Iroquois Gas Transmission Company at Waddington, NY. The TCPL system (via the Trans Quebec and Maritimes TQM pipeline) also delivers gas into the Portland Natural Gas Transmission System (PNGTS) at Pittsburg, NH. These three delivery points represent about 75 percent of Northeast imports from Canada. Further east in New England gas supplies come from the offshore Sable Island gas fields on the East Coast of Canada via the Maritimes and Northeast Pipeline as well as LNG imports. Several smaller regional natural gas importing pipelines, such as North County Pipeline Company and the St. Lawrence Gas Company both located in upper New York State, and the Vermont Gas Systems Company the only natural gas pipeline in the State of Vermont; depend upon Canadian natural gas imports that originate in Western Canada. 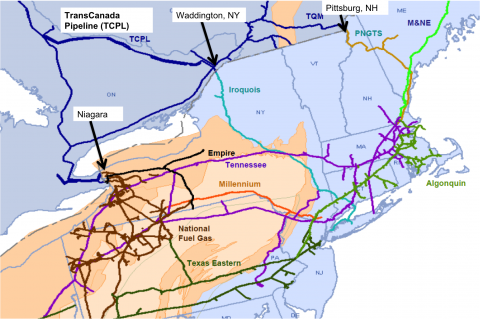 Assuming that Marcellus gas is a shoe in to replace alternative supplies in the Northeast – causing imports of Canadian gas to dry up in the next two to three years then what is the level of demand for Marcellus supplies across the border in Ontario? As we have seen, that market has been dependent on supplies from Western Canada. Those supplies have been declining in recent years for three reasons. First Western Canadian production has been declining – down about 15 percent since January 2008 – in the face of lower prices and competition from shale gas in the US market. Second the demand for natural gas to produce Canadian oil sands has increased – reducing the volumes available to move east. Third Canadian gas has faced tough competition for US markets from shale gas produced locally - pushing back the gas moving across the border into the Northeast.

At the same time, demand for natural gas in Ontario has increased. Natural gas demand in Ontario was ~2 Bcf/d in 2011 and is forecast to increase to ~3.25 Bcf/d by 2020 (source: ICF International). A lot of that increase is attributable to gas fired generation. Ontario regulations require coal fired generating plants to shut down by 2014. As a result, natural gas fired generation supplied 14.6 percent of Ontario’s power in 2012 up from 7 percent in 2008.  Natural gas producers across the border in New York and Pennsylvania therefore see Ontario as an attractive growth market to sell their rising production volumes of low priced gas into.

A number of pipeline projects are already underway or completed that focus on delivering additional gas supplies from the Marcellus into Ontario. The first thrust of these projects has been to deliver supplies to Niagara in New York and to allow for the reversal of gas flows across the Canadian border from Niagara to Ontario. The map below shows the main projects on the US side of the border by National Fuel Gas (NFG), Tennessee Gas Pipeline (TGP) and Empire Pipeline. We covered these projects in detail in Bob Bookstaber’s blog series about Northeast US pipeline expansions (see Northeast Gas Parts I, II, III, IV). The two border crossing points are at Niagara and Chippawa (Grand Island, NY) that connect to TCPL pipelines on the Canadian side. 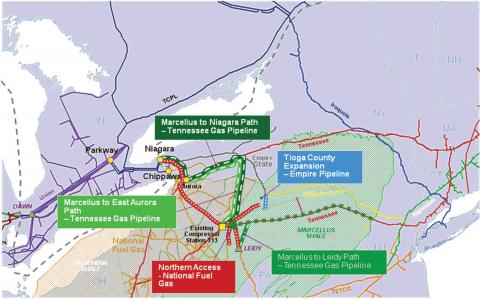 The Tioga County Expansion Project went into service in 2011 permitting the Empire pipeline to receive up to 350 MDth/d of Marcellus production and to transport that gas to Chippawa.  The TGP Northeast Supply Diversification Project (green lines on the map above) and NFG Northeast Access Project (red line on the map) both went into service in November 2012 and permit an additional 570 MDth/d of gas to flow from New York to Ontario.

The result is that significant gas supplies started to flow from Niagara to Ontario in November 2012. The chart below neatly summarizes the narrative in this blog. The NEB data shows Canadian exports and imports of natural gas across the border at Niagara since 2008. You can see that exports from Canada declined sharply since 2008 (blue line). Small quantities of imports into Canada from the US (red line) have occurred in the past two years but there is a dramatic jump in imports to 0.3 Bcf/d during November 2012 (green circle) when the new Marcellus capacity expansions opened up. 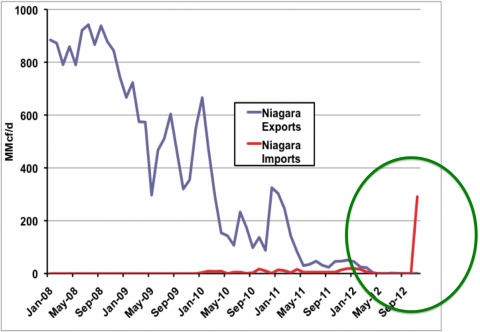 In future episodes in this blog series we will look at the preparations being made to accommodate the flow of US natural gas to markets on the Ontario side of the border. That includes projects to accommodate increased flow from Niagara as well as longer term plans to flow Utica gas into the Canadian trading hub at Dawn. We will also look at progress to reverse the flow of gas from Canada across the border at Waddington, NY and Plattsburg, NH.

In the meantime we conclude today’s discourse by re-iterating that flow reversal is real and it is happening at Niagara. That process will gather pace in the coming years as Marcellus and Utica production increases and the facilities to handle US gas imports are built on the Canadian side. The days of 3 Bcf/d Canadian exports to the Northeast are over and the message to Western Canadian producers is “Return to Sender – No Such Demand”.

“Return to Sender” was recorded by Elvis in March 1962

Hi Sandy, what do you think the export potential is combining Canada and Mexico?  It looks like infrastructure is being put in place to move around 4Bcf/d+ into Mexico, maybe more.  How high could the Canadian exports get?

Export potential to Canada is going to depend on three factors. 1. Pipeline reversals - work on the US and Canadian side to accommodate the flows from the US. 2. US gas prices remaining low enough to compete in Canada and 3. The degree to which Canadian producers currently serving the East Canada market put up a fight to protect their market share. The infrastructure will determine potential volume.