With natural gas production in Marcellus/Utica on a steep upward curve, midstream companies are developing plans to rework their existing pipelines or build new ones to help move the region’s gas to market. No stone is being left unturned. Today we conclude our five-part series on moving Marcellus/Utica gas south and west with a look at Columbia Pipeline Group and Boardwalk Pipeline Partners plans, sum up the takeaway capacity being added in the 2014-17 period, and explore whether additional pipeline-network enhancements will be needed after the current round of projects is up and running.

The need for southbound and westbound pipeline capacity out of the Marcellus/Utica is founded on the region’s rapidly expanding gas production. In our series opener, we discussed how Marcellus/Utica gas production has risen from 2 Bcf/d in 2010 to 15 Bcf/d now, and is expected to rise to 22 Bcf/d by 2019. The pipeline infrastructure that served the Northeast and Midwest well until the shale boom of the past several years was designed to move Gulf Coast-sourced gas to the north and east. Now, however, Marcellus/Utica gas is squeezing Gulf Coast gas out of the Northeast and is competing for market share in the Southeast, the Midwest and even the Gulf Coast itself. But producers need pipelines that can deliver their gas to those markets, and midstream companies are doing their best to oblige. In Part 2, we looked at Spectra Energy’s multi-phase plan to rework its Texas Eastern Transmission (TETCO) trunkline to allow southbound gas deliveries, and at Spectra’s plan (with NextEra Energy) to build the Sabal Trail gas pipeline from Transco’s Station 85 (in west-central Alabama) to near Orlando. That spurred discussion—in Part 3—of plans by Williams to make much of Transco bi-directional, as well as plans by Williams and others to build major laterals to move southbound Utica/Marcellus gas to consumers in Maryland, Virginia, North Carolina and Georgia. Part 4 looked at several bi-directionality projects within the Midwest and between Utica/Marcellus and the Gulf Coast, including the Rockies Express, the Gulf Coast Mainline, and the Southeast Main Line.

This time, we consider plans by Columbia Pipeline Group (CPG) and Boardwalk Pipeline Partners (BPP). CPG has been at work on several projects that, taken together, will increase its capacity to move Marcellus/Utica gas to the southwestern edge of its Columbia Gas Transmission (TCO) system at Leach, KY, and enable deliveries to the Gulf Coast through the Columbia Gulf Transmission (CGT) pipeline from Leach to Rayne, LA (see Figure #1). 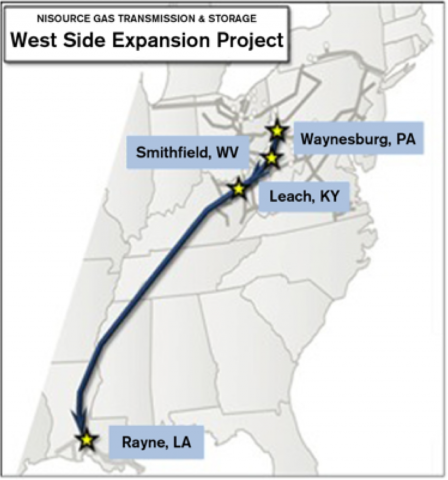 CPG recently completed the Gulf Bi-Direction Project, which enables up to 540 MMcf/d to be transported from Leach to Rayne. Now it is at work on, among other things, the Smithfield III Project, which when it is completed this November (2014) will enable firm transport capacity of 444 MMcf/d on TCO from Waynesburg/Smithfield to Leach. CPG recently held successful open seasons on two other, related projects: Leach Xpress and Rayne Xpress. Leach Xpress will increase the capacity of the TCO system to deliver Marcellus/Utica gas to Leach by another 1 to 1.5 Bcf/d by November 2016. Rayne Xpress, meanwhile, will complete the effort to make the Columbia Gulf Transmission pipeline bi-directional its entire length, from Leach to Rayne, and will add up to 1.5 Bcf/d of southbound capacity, again by November 2016. WB Xpress, a project in a slightly earlier stage, will add up to 1.2 Bcf/d of eastbound capacity along TCO’s WB line (to Transco Zone 5, for instance, or to the Cove Point pipeline), and add up to 800 MMcf/d of westbound capacity along WB to Broad Run, WV or to Leach. (At Broad Run, gas could flow into the Tennessee Gas Pipeline, which also is providing Gulf Coast access—see Part 4.) CPG also has been working on several mostly smaller pipeline enhancement projects on the eastern side of TCO.

To access the remainder of They Want to Be Close to You—A Final Set of Marcellus/Utica Pipeline Projects you must be logged as a RBN Backstage Pass™ subscriber.