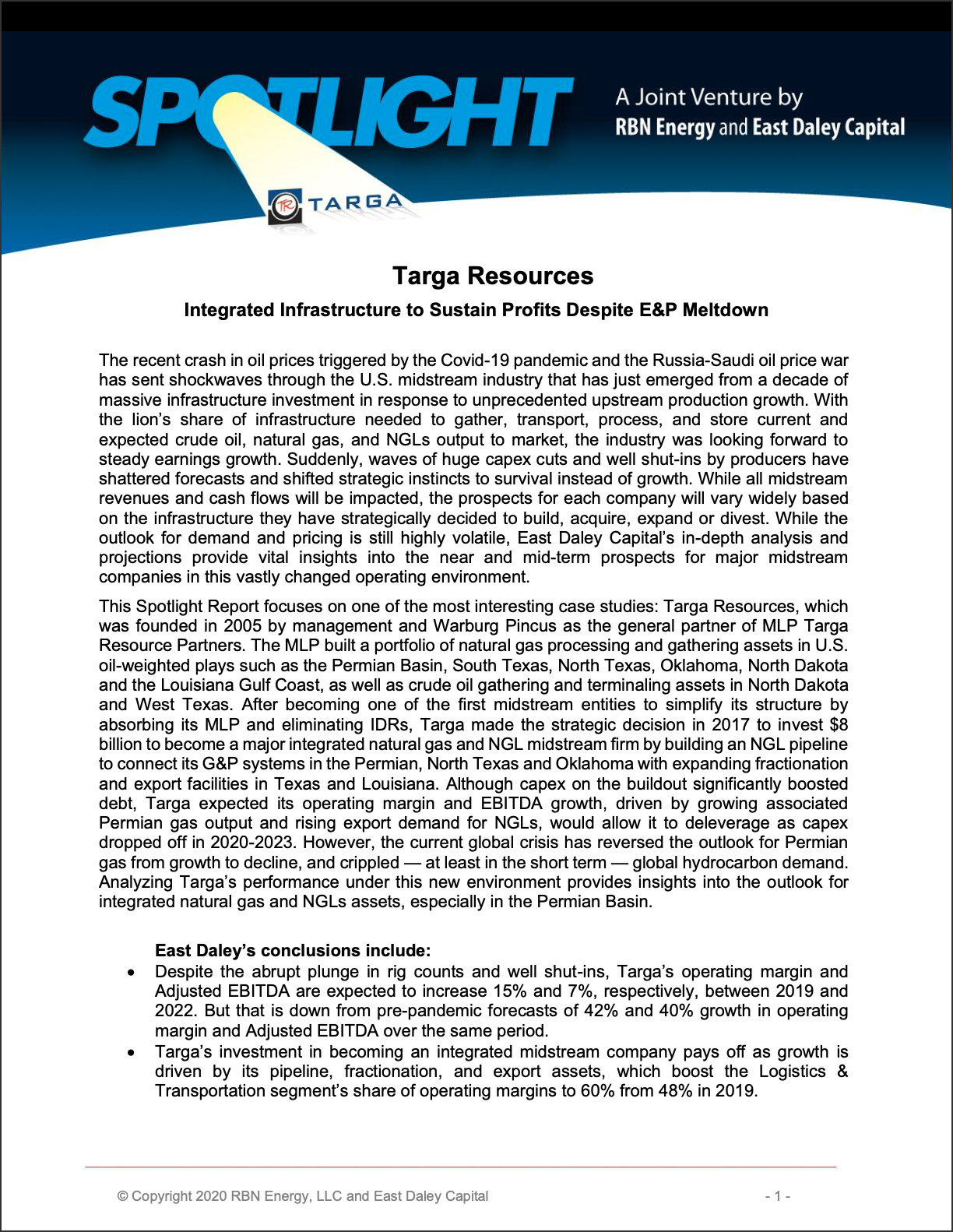 This Spotlight Report focuses on one of the most interesting case studies: Targa Resources, which was founded in 2005 by management and Warburg Pincus as the general partner of MLP Targa Resource Partners. The MLP built a portfolio of natural gas processing and gathering assets in U.S. oil-weighted plays such as the Permian Basin, South Texas, North Texas, Oklahoma, North Dakota and the Louisiana Gulf Coast, as well as crude oil gathering and terminaling assets in North Dakota and West Texas. After becoming one of the first midstream entities to simplify its structure by absorbing its MLP and eliminating IDRs, Targa made the strategic decision in 2017 to invest $8 billion to become a major integrated natural gas and NGL midstream firm by building an NGL pipeline to connect its G&P systems in the Permian, North Texas and Oklahoma with expanding fractionation and export facilities in Texas and Louisiana. Although capex on the buildout significantly boosted debt, Targa expected its operating margin and EBITDA growth, driven by growing associated Permian gas output and rising export demand for NGLs, would allow it to deleverage as capex dropped off in 2020-2023. However, the current global crisis has reversed the outlook for Permian gas from growth to decline, and crippled — at least in the short term — global hydrocarbon demand. Analyzing Targa’s performance under this new environment provides insights into the outlook for integrated natural gas and NGLs assets, especially in the Permian Basin.

The insights in this Spotlight report based on unique in-depth analysis and projections from East Daley Capital include:

Spotlight: Targa is included in RBN’s Drill Down report series, a suite of reports covering many of the key issues expected to impact the markets for crude oil, natural gas and natural gas liquids. Spotlight reports are part of RBN Backstage Pass™ premium resources that also include Blog Archive Access, Spotcheck Indicators, Market Fundamentals Webcasts, Get-Togethers and more. Spotlight is a joint venture of RBN Energy and East Daley Capital Advisors.  By subscribing to RBN’s Backstage Pass™ Premium Services, you plug into our network and get direct access to our premium resources.

For more information on our friends at East Daley Capital, please visit: https://rbnenergy.com/partners/east-daley-capital-advisors