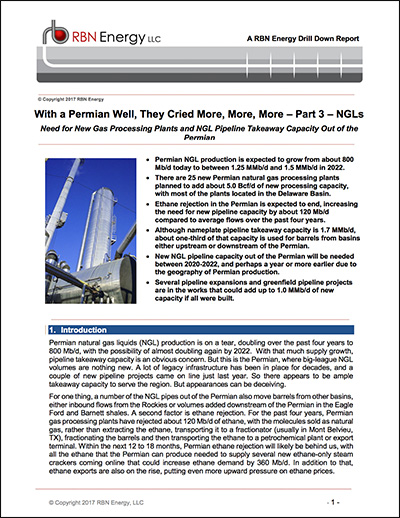 Permian NGL production is on a tear, doubling over the past four years to 800 Mb/d, with the possibility of almost doubling again by 2022.  With that much supply growth, pipeline takeaway capacity is an obvious concern. But this is the Permian, where big-league NGL volumes are nothing new. A lot of legacy infrastructure has been in place for decades, and a couple of new pipeline projects came on line just last year. So there appears to be ample takeaway capacity to serve the region. But appearances can be deceiving.

Not all of the pipeline capacity exiting the Permian can be used by Permian producers, and there are a number of factors – such as the looming end of Permian ethane rejection – that will accelerate the need for more capacity sooner rather than later.   Fortunately for Permian NGL producers, several pipeline expansion projects are in the works.   But exactly how many pipelines, and how soon they will be needed remain open questions.  This Drill Down report addresses these questions and many others.

With a Permian Well, They Cried More, More, More – Part 3 – NGLs: Need for New Gas Processing Plants and NGL Pipeline Takeaway Capacity Out of the Permian is included in RBN Energy’s 2017 Drill Down report series, a suite of reports covering many of the key issues expected to impact the markets for crude oil, natural gas and natural gas liquids. Drill Down reports are part of RBN Backstage Pass™ premium resources that also include Blog Archive Access, Spotcheck Indicators, Market Fundamentals Webcasts, Get-Togethers and more. By subscribing to RBN’s Backstage Pass™ Premium Services, you plug into our network and get direct access to our premium resources.

Download a preview of With a Permian Well, They Cried More, More, More - Permian NGLs: Plants and Pipelines