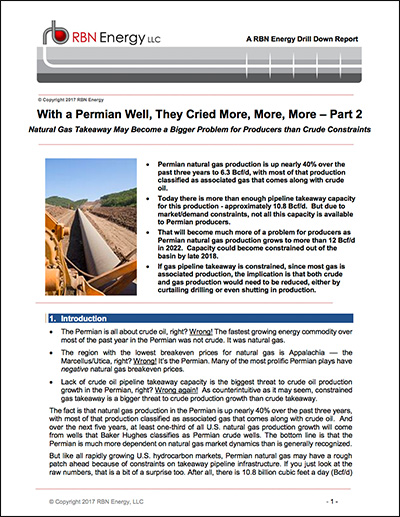 Natural gas production in the Permian is up nearly 40% over the past three years, with most of that production classified as associated gas that comes along with crude oil. And over the next five years, at least one-third of all U.S. natural gas production growth will come from wells that Baker Hughes classifies as Permian crude wells. The bottom line is that the Permian is much more dependent on natural gas market dynamics than is generally recognized. But like all rapidly growing U.S. hydrocarbon markets, Permian natural gas may have a rough patch ahead, due to constraints on takeaway pipeline infrastructure.

This RBN Drill Down Report is the second in a series of Permian assessments, this time focusing on the natural gas market. In it, we examine each of the nine pipelines that have traditionally provided natural gas takeaway capacity out of the Permian: El Paso, Transwestern, Northern Natural, NGPL, ET Fuel, ET Oasis, Enterprise Texas, Atmos, and Kinder Morgan Texas. Our analysis includes an outline of the owner, origin, destination, capacity, and a map of each pipeline system. We also review the three more recently developed projects to move Permian gas to Mexico: Roadrunner, Comanche Trail and Trans-Pecos. With this analysis as a foundation, we then review potential capacity additions from three new projects proposed by NAmerico, Enterprise and Kinder Morgan. Based on our assessment of existing and potential takeaway capacity, we then consider what these gas market developments mean for Permian prices and the ultimate risk of production curtailments.

With a Permian Well, They Cried More, More, More – Part 2: Natural Gas Takeaway May Become a Bigger Problem for Producers than Crude Constraints is included in RBN Energy’s 2017 Drill Down report series, a suite of reports covering many of the key issues expected to impact the markets for crude oil, natural gas and natural gas liquids. Drill Down reports are part of RBN Backstage Pass™ premium resources that also include Blog Archive Access, Spotcheck Indicators, Market Fundamentals Webcasts, Get-Togethers and more. By subscribing to RBN’s Backstage Pass™ Premium Services, you plug into our network and get direct access to our premium resources.

Download a preview of With a Permian Well, They Cried More, More, More - Part 2