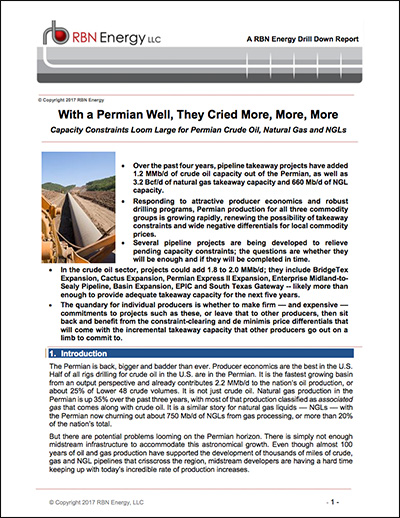 The Permian is back, bigger and badder than ever. Producer economics are the best in the U.S.  Half of all rigs drilling for crude oil in the U.S. are in the Permian. It is the fastest growing basin from an output perspective and already contributes 2.2 MMb/d to the nation’s oil production, or about 25% of Lower 48 crude volumes. But there are potential problems looming on the Permian horizon. There is simply not enough midstream infrastructure to accommodate this astronomical growth.

How bad could Permian takeaway capacity constraints become over the next few years? Will projects that have been announced take care of the problems before they happen? What happens if crude oil prices increase to levels that stimulate even more drilling and consequently result in even faster production growth?

To fully answer these questions for each of the three energy commodity groups––crude oil, natural gas and NGLs––it is important to develop a comprehensive understanding of the infrastructure that is in place today, the current utilization rates of that infrastructure, the expected rate of production growth, and the potential impact of proposed new takeaway capacity projects in the region. This RBN Drill Down Report is the first in a series of Permian assessments; we start with crude oil pipeline capacity and utilization. In it, we examine each of the nine pipelines currently providing crude oil pipeline takeaway out of the Permian: Basin, Centurion, West Texas Gulf, Amdel, Longhorn, BridgeTex, Cactus, Permian Express II and PELA. Our analysis includes a dossier on the owner, origin, destination, capacity, tariff rate, and other details about each system; a map of each pipeline; our assessment of current pipeline capacity utilization; and our projection of future capacity utilization of each pipe.

With this analysis as a foundation, we then review potential capacity additions from seven expansion and greenfield projects: BridgeTex Expansion, Cactus Expansion, Permian Express II Expansion, Midland-to-Sealy, Basin Expansion, EPIC and South Texas Gateway. As with existing pipes, we provide details on each project and a map of the project’s route.

With a Permian Well, They Cried More, More, More: Capacity Constraints Loom Large for Permian Crude Oil, Natural Gas and NGLs is the 3rd in RBN Energy’s 2017 Drill Down report series, a suite of monthly reports covering many of the key issues expected to impact the markets for crude oil, natural gas and natural gas liquids. Drill Down reports are part of RBN Backstage Pass™ premium resources that also include Blog Archive Access, Spotcheck Indicators, Market Fundamentals Webcasts, Get-Togethers and more. By subscribing to RBN’s Backstage Pass™ Premium Services, you plug into our network and get direct access to our premium resources.

Download a preview of With a Permian Well, They Cried More, More, More