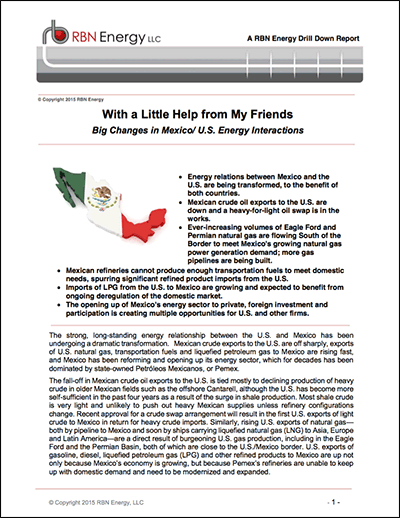 The strong, long-standing energy relationship between the U.S. and Mexico has been undergoing a dramatic transformation.   Mexican crude exports to the U.S. are off sharply, exports of U.S. natural gas, transportation fuels and liquefied petroleum gas to Mexico are rising fast, and Mexico has been reforming and opening up its energy sector, which for decades has been dominated by state-owned Petróleos Mexicanos, or Pemex.

Access to vast quantities of imported natural gas from the Eagle Ford, the Permian Basin and other U.S. shale plays is enabling Mexico to expand and modernize its power generation sector by building thousands of megawatts of new, gas-fired power plants, and to shift many industrial, commercial and residential customers to gas from dirtier, less efficient fuels. Mexico also benefits by securing the gasoline, diesel, LPG and other refined products it needs to supplement its own production—and to get them from a friendly, reliable source. The Mexican government’s decision to encourage U.S. and other foreign investment in oil and gas exploration and production will likely help Mexico reverse recent production declines, and give new life to Mexico’s economy in general. In essence, Mexico has been rapidly converting from a net energy exporter to the U.S. (mostly in the form of crude oil) into a country that exports a lot less crude to the U.S. and imports a lot of natural gas--and quite a bit of transportation fuel and LPG too.

This Drill Down report considers each major sector of U.S./Mexico energy relations in turn, beginning with crude oil and transportation fuels, followed by natural gas and LPG. The report then reviews Mexico’s energy sector reform plan, and concludes with an analysis of what likely lies ahead.

With a Little Help from My Friends: Big Changes in Mexico / U.S. Energy Interactions is the tenth of RBN Energy’s Drill Down report series, a suite of twelve reports coming from RBN during 2015 covering many of the key issues expected to impact the markets for crude oil, natural gas and natural gas liquids.