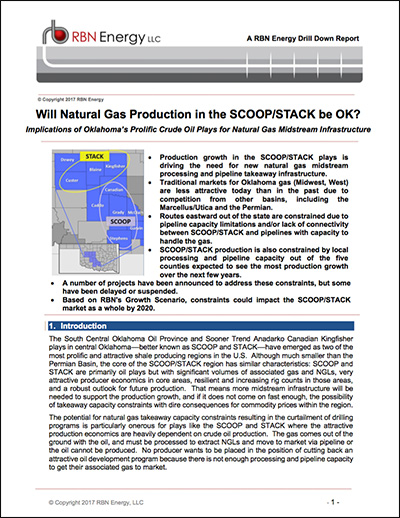 The South Central Oklahoma Oil Province and Sooner Trend Anadarko Canadian Kingfisher plays in central Oklahoma -better known as SCOOP and STACK- have emerged as two of the most prolific and attractive shale producing regions in the U.S. Although much smaller than the Permian Basin, the core of the SCOOP/STACK region has similar characteristics: SCOOP and STACK are primarily oil plays but with significant volumes of associated gas and NGLs, very attractive producer economics in core areas, resilient and increasing rig counts in those areas, and a robust outlook for future production. That means more midstream infrastructure will be needed to support the production growth, and if it does not come on fast enough, the possibility of takeaway capacity constraints with dire consequences for commodity prices within the region.

In this Drill Down Report, we look at the geography of the SCOOP and STACK, assess natural gas production growth for Oklahoma as a whole and at the county level for SCOOP/STACK, examine pipeline flow and capacity takeaway trends over the past three years, and then pull the analysis together with an assessment of when capacity constraints may be expected to impact the market—assuming no projects are built to address the issues. Then we summarize some of the projects on the drawing boards today that are targeted toward these constraints, and conclude with an overall view of the SCOOP/STACK natural gas market.

Will Natural Gas Production in the SCOOP/STACK be OK? - Implications of Oklahoma’s Prolific Crude Oil Plays for Natural Gas Midstream Infrastructure is the 2nd in RBN Energy’s 2017 Drill Down report series, a suite of monthly reports covering many of the key issues expected to impact the markets for crude oil, natural gas and natural gas liquids. Drill Down reports are part of RBN Backstage Pass™ premium resources that also include Blog Archive Access, Spotcheck Indicators, Market Fundamentals Webcasts, Get-Togethers and more. By subscribing to RBN’s Backstage Pass™ Premium Services, you plug into our network and get direct access to our premium resources.

Donwload a preview of Will Natural Gas Production in the SCOOP/STACK be OK?