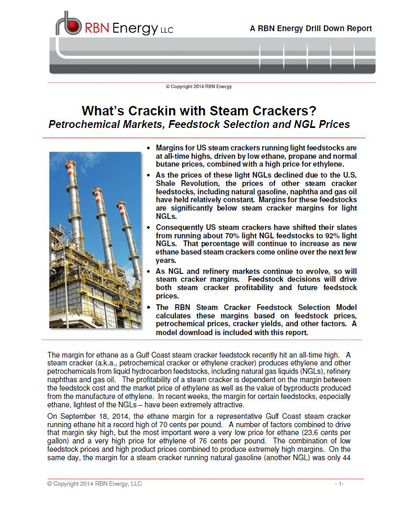 On September 19, 2014, the operating margin for a representative Gulf Coast steam cracker running ethane hit a record high of 70.4 cents per pound. The combination of a low ethane price and a high price for ethylene combined to produce an extremely high margin for that feedstock. But on the same day, the margin for a steam cracker running natural gasoline was 47.3 cents per pound. Also an attractive margin, but only 67% of the ethane margin.

That difference in relative feedstock margins is the most important factor that influences which feedstocks that steam crackers choose to run, and has a significant impact on the profitability of US petrochemical companies. Firms with crackers processing ethane are enjoying very healthy returns by maximizing the volume of ethane they are running. Petchems are investing heavily to minimize their runs of heavy feedstocks like natural gasoline, refinery naphtha and gas oil while increasing their runs of lighter feedstocks, including ethane and propane. Billions in new U.S. cracker investment are in the works, and European crackers are getting into the act with plans to use cheap U.S. ethane shipped from the East and Gulf coasts.

To understand the dynamics of these developments, you need to get into the details. This RBN Energy Drill-Down Report does that using the latest version of RBN’s Steam Cracker Feedstock Selection Model, which calculates these margins based on feedstock prices, petrochemical prices, cracker yields, and other factors. A download of the model is included with this report.

What’s Crackin with Steam Crackers is the ninth in RBN Energy’s Drill Down report series, a suite of twelve reports coming from RBN during 2014 covering many of the key issues expected to impact the markets for crude oil, natural gas and natural gas liquids.