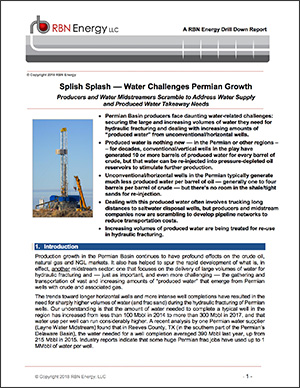 Production growth in the Permian Basin continues to have profound effects on the crude oil, natural gas and NGL markets. It also has helped to spur the rapid development of what is, in effect, another midstream sector: one that focuses on the delivery of large volumes of water for hydraulic fracturing and - just as important, and even more challenging - the gathering and transportation of vast and increasing amounts of “produced water” that emerges from Permian wells with crude and associated gas.

In this Drill Down Report, we review our analysis of past and present produced water volumes being generated in the Permian by conventional and unconventional wells, and discuss a number of representative water and produced water pipeline systems in the Permian - some existing and some planned. We also consider the play’s need for more water-related infrastructure as production there continues to grow.

Splish Splash - Water Challenges Permian Growth is included in RBN Energy’s 2018 Drill Down report series, a suite of reports covering many of the key issues expected to impact the markets for crude oil, natural gas and natural gas liquids. Drill Down reports are part of RBN Backstage Pass™ premium resources that also include Blog Archive Access, Spotcheck Indicators, Market Fundamentals Webcasts, Get-Togethers and more. By subscribing to RBN’s Backstage Pass™ Premium Services, you plug into our network and get direct access to our premium resources.