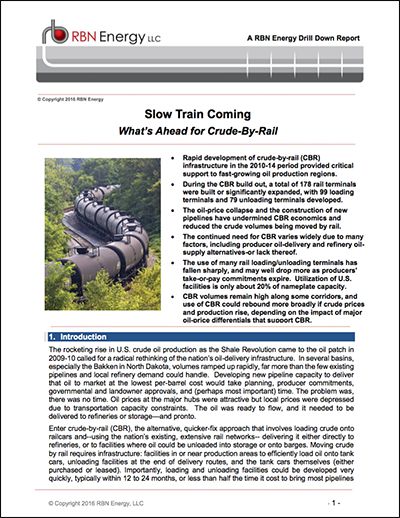 In RBN’s new Drill Down Report on crude-by-rail (CBR), we undertake a deep-dive analysis of the CBR phenomenon, starting with the profound takeaway constraints and steep price differentials that spurred CBR’s development as the go-to fix that enabled pipeline-constrained shale regions to move fast-increasing volumes of oil to market.   From the early years of CBR until now, a total of 178 rail terminals were built or significantly expanded, with 99 loading terminals and 79 unloading terminals developed in the U.S. and Canada.

But changes in the market -- lower oil prices, slowing/declining production, new pipeline capacity -- have been challenging and undermining CBR.  Only about 20% of U.S. nameplate capacity is being used, and further declines in CBR volumes are expected, prompting serious questions about CBR’s future role.

Today the future for CBR remains hazy indeed, particularly if persistently low oil prices continue to hold down production volumes. But all is not gloom and doom. Volumes on some CBR shipping corridors are holding up and a few new terminals continue to be built. Also, the inherent advantages of CBR-- flexibility, optionality and speed-to-market--will always play a role in the continually evolving crude oil markets.

In this Drill Down Report, we examine the fast-paced evolution of CBR from producers’ godsend to crude-delivery mainstay, and from mainstay to too-costly alternative to pipelines. Importantly, we consider CBR on a local basis, because it is clear that the variables that affect CBR economics and volumes are as much local as they are national.

Slow Train Coming: What’s Ahead for Crude-By-Rail is the 4th in RBN Energy’s 2016 Drill Down report series, a suite of monthly reports covering many of the key issues expected to impact the markets for crude oil, natural gas and natural gas liquids. Drill Down reports are part of RBN Backstage Pass™ premium resources that also include Blog Archive Access, Spotcheck Indicators, Market Fundamentals Webcasts, Get-Togethers and more. By subscribing to RBN’s Backstage Pass™ Premium Services, you plug into our network and get direct access to our premium resources.