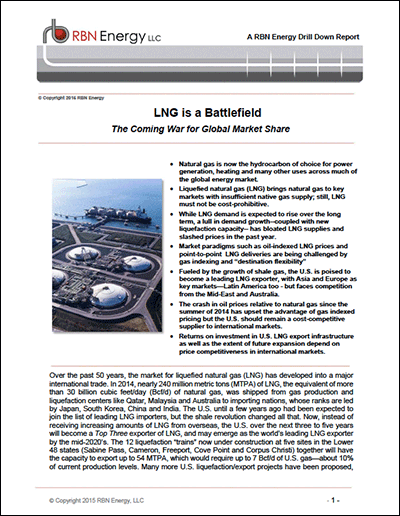 The U.S. until a few years ago had been expected to join the list of leading LNG importers, but the shale revolution changed all that. Now, instead of receiving increasing amounts of LNG from overseas, the U.S. over the next three to five years will become a Top Three exporter of LNG, and may emerge as the world’s leading LNG exporter by the mid-2020’s. The 12 liquefaction “trains” now under construction at five sites in the Lower 48 states (Sabine Pass, Cameron, Freeport, Cove Point and Corpus Christi) together will have the capacity to export up to 54 MTPA (million metric tons per annum), which would require up to 7 Bcf/d of U.S. gas—about 10% of current production levels. Many more U.S. liquefaction/export projects have been proposed, but the degree to which U.S.-sourced LNG can penetrate international markets remains to be seen.

This RBN Drill-Down Report describes the LNG trade, beginning with a brief historical summary, and followed by sections on the recent and near-term markets; major LNG importing nations in Asia and Europe; and efforts to change the traditional commercial structures of LNG contracts, especially those provisions dealing with pricing. That sets the stage for a discussion on the key factors that will determine the need for additional liquefaction/export projects, and conclusions regarding how LNG market changes may benefit U.S. gas producers and LNG exporters.

LNG is a Battlefield: The Coming War for Global Market Share is the seventh of RBN Energy’s Drill Down report series, a suite of twelve reports coming from RBN during 2015 covering many of the key issues expected to impact the markets for crude oil, natural gas and natural gas liquids.