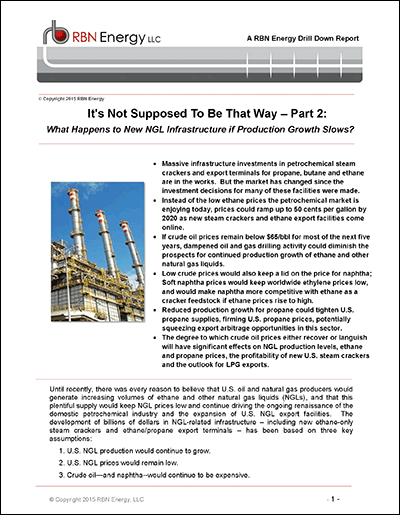 Until recently, there was every reason to believe that U.S. oil and natural gas producers would generate increasing volumes of ethane and other natural gas liquids (NGLs), and that this plentiful supply would keep NGL prices low and continue driving the ongoing renaissance of the domestic petrochemical industry and the expansion of U.S. NGL export facilities. The development of billions of dollars in NGL-related infrastructure – including new ethane-only steam crackers and ethane/propane export terminals – has been based on three key assumptions:

But the collapse of crude oil prices in the latter half of 2014 and early 2015 and only a slight rebound this spring and early summer has undermined this set of assumptions. This two-part report, the initial portion of which was released in June, provides a detailed analysis of how an extended period of relatively low crude and naphtha prices could affect U.S. NGL production and pricing, and how these changes in NGL availability and cost might affect the economics of new and expanded U.S. steam crackers, existing and planned propane and ethane export terminals, and other major infrastructure developed to take advantage of this set of assumptions that may not, in the end, play out.

In Part 1, we considered the recent history of NGL production growth in the U.S. and the challenges inherent in making infrastructure development decisions. We also provided the analytical framework to be used in our analysis of future NGL production and pricing, as well as a preview of our NGL price outlook under different crude oil price scenarios. In Part 2, we examine RBN’s alternative forecasts for NGL prices, and examine petrochemical feedstock switching capabilities and preferences, and the implications of lower crude oil production for ethane supplies. We also consider further logistical complications for ethane (such as capacity constraints to move ethane supplies to the Gulf Coast), and the implications of lower crude oil prices for propane exports.

It's Not Supposed To Be That Way: NGL Prices and Petchem Margins (Part 2) is the sixth of RBN Energy’s Drill Down report series, a suite of twelve reports coming from RBN during 2015 covering many of the key issues expected to impact the markets for crude oil, natural gas and natural gas liquids.