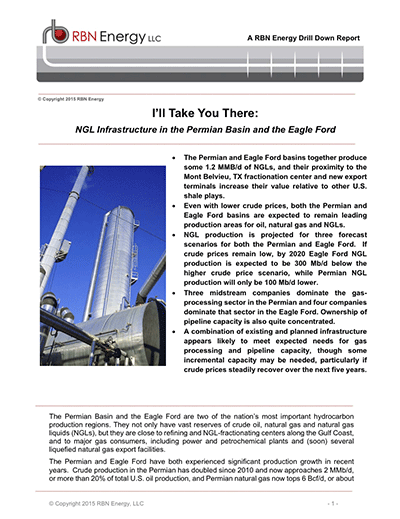 The Permian Basin and the Eagle Ford are two of the nation’s most important hydrocarbon production regions. They not only have vast reserves of crude oil, natural gas and natural gas liquids (NGLs), but they are close to refining and NGL-fractionating centers along the Gulf Coast, and to major gas consumers, including power and petrochemical plants and (soon) several liquefied natural gas export facilities.

The Permian and Eagle Ford have both experienced significant natural gas production growth in recent years with much of the increase in production coming from wet (high btu) gas and associated gas. Producers have targeted liquids rich gas for its yield of NGLs, and crude oil production usually comes along with liquids rich gas, yielding still more NGLs. In the Permian, NGL volumes are up to almost 500 Mb/d, from less than 350 Mb/d in 2011. The Eagle Ford is closer to 700 Mb/d, up from only about 180Mb/d in 2011.

Significant additions in processing capacity have been required to extract all of these NGLs. Today current processing capacity in the Permian is up to 4.5 Bcf/d while the Eagle Ford is at 8.4 Bcf/d. But that is not enough capacity to handle the most likely scenarios for future gas processing needs.

Of course, there is considerable uncertainty regarding the outlook for Permian and Eagle Ford NGL production due to the crash in crude oil prices, which also drove down propane, butane and natural gasoline prices by about 40% from November 2014 to March 2015. Only ethane, already near historic lows avoided collapsing along with crude oil. Consequently, with much lower crude and NGL prices, what is likely to happen to NGL production? This report addresses that question using a scenario approach.

I’ll Take You There: NGL Infrastructure in the Permian Basin and the Eagle Ford is the second of RBN Energy’s Drill Down report series, a suite of twelve reports coming from RBN during 2015 covering many of the key issues expected to impact the markets for crude oil, natural gas and natural gas liquids.